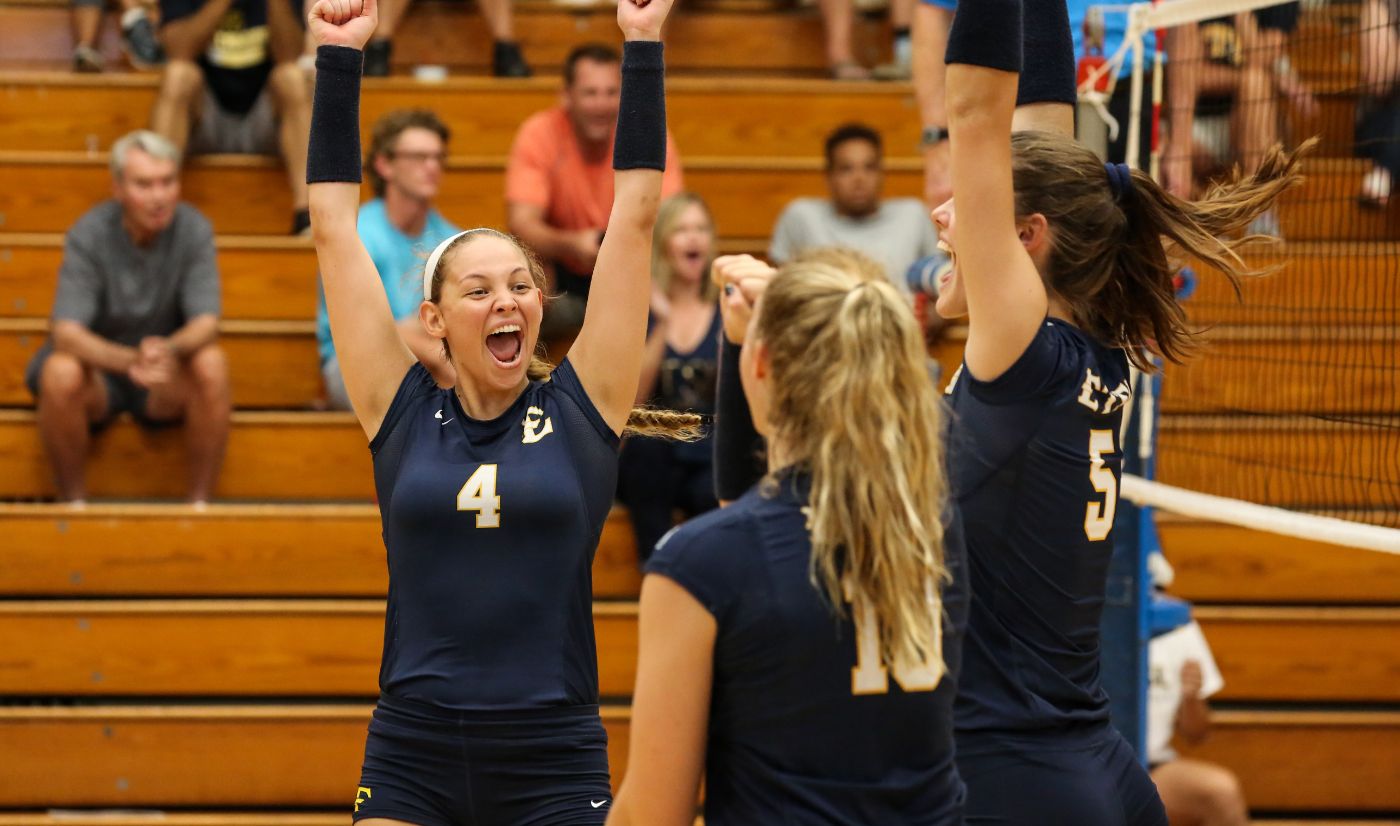 JOHNSON CITY, Tenn. (Sept. 1, 2016) - The ETSU volleyball team will hit the road for the first time this season as it travels to Lynchburg, Va. to compete in the Liberty Invitational this weekend. The Bucs (3-0) will begin the tournament with a matchup with Hampton at 4:30 p.m. Friday before closing out the tournament with matches against USC Upstate (10 a.m.) and Liberty (7 p.m.) on Saturday.

Scouting the Buccaneers
The Bucs picked up a trio of 3-0 victories in their opening weekend of action at the DoubleTree Buccaneer Challenge at Brooks Gym. The 3-0 start by ETSU is the program’s best start since the 2012 season.

Individually, the Bucs are led by the reigning SoCon Offensive Player of the Week Rylee Milhorn (Kingsport, Tenn.). Milhorn was named the DoubleTree Hotel Buccaneer Challenge Most Valuable Player following last weekend’s play. Milhorn, a Preseason All-SoCon selection, led all players with 32 kills and hit .366 for the tournament. Milhorn was also a contributor defensively for ETSU as she totaled 27 digs (3.00 D/S) and five block assists on the weekend.

The Buccaneer defense has also been stellar through the season’s early going with as it has held opponents to a hitting percentage of .060. Spearheading the defense has been the duo of Kaela Massey (Brentwood, Tenn.) and Hailey Aguilar (Oswego, Ill.). Massey currently leads the SoCon averaging 1.33 blocks per set, while Aguilar paces the team with 43 digs on the season.

Scouting the Opponents
Hampton: Hampton enters the weekend with a 0-2 record so far in 2016. The Lady Pirates, however, have been a force on the block so far this season as they are averaging a MEAC-leading 3.00 blocks per set. The Lady Pirates’ block per set mark ranks 22nd nationally.

USC Upstate: The Spartans, who competed in last weekend’s Buccaneer Challenge, comes into the weekend with a 0-4 record. USC Upstate does lead the Atlantic Sun and ranks seventh in the nation with 280 digs. Madison Haake, who has been a major cog in USC Upstate’s defense, is tied for the national lead with a pair of triple-doubles on the season.

Liberty: The Flames enter play with a 0-3 record, but two of those defeats came against Power 5 programs in Pittsburgh and Missouri. Much like Hampton, Liberty’s strength has been its work defensively. The Flames lead the Big South averaging 2.50 blocks per set . Indivdually, Sirena Vorster leads these efforts on the block leading the team with an average of 1.70 blocks per set.

Unbeaten Bucs
ETSU is off to its first 3-0 start since 2012. The Bucs have quite a ways to go before they tie the program record for victories to begin the season as 1987 team went 10-0 to start its season. That team finished its season with a 22-5 record.

Milhorn is named SoCon Offensive Player of the Week
Milhorn received her first SoCon weekly honor of her career this week as the Kingsport, Tenn. native was named the conference’s Offensive Player of the Week. Milhorn was named the DoubleTree Hotel Buccaneer Challenge Most Valuable Player following last weekend’s play. Milhorn, a Preseason All-SoCon selection, led all players with 32 kills and hit .366 for the tournament. Milhorn was also a contributor defensively for ETSU as she totaled 27 digs (3.00 D/S) and five block assists on the weekend.

Killing it
ETSU enters this weekend’s play averaging 13.44 kills per set, which leads the SoCon. The Bucs have a pair of players ranked in the league’s top 10 for kills per set as well in Rylee Milhorn (4th - 3.56) and Briana Allmon (Flower Mound, Texas) (8th - 2.89).

Buc Blockade
The Bucs led the SoCon in blocking a season ago and they have continued that into 2016. The team currently ranks second in the conference behind Western Carolina averaging 2.33 blocks per frame. Additionally, freshman Kaela Massey leads the league averaging 1.33 blocks per set.

Series History vs. Opponents
ETSU has a winning record in each of the all-time series against its three opponents this weekend. The Bucs swept Hampton, 3-0, in the only matchup between the two programs during the 2010 season. Former Atlantic Sun rivals, ETSU and USC Upstate, met just last weekend with the Bucs coming out on top for the 13th time in 18 all-time meetings. Lastly, ETSU has won five of the eight meetings against Liberty, including a 3-0 win over the Flames in their last ecounter in 2013.