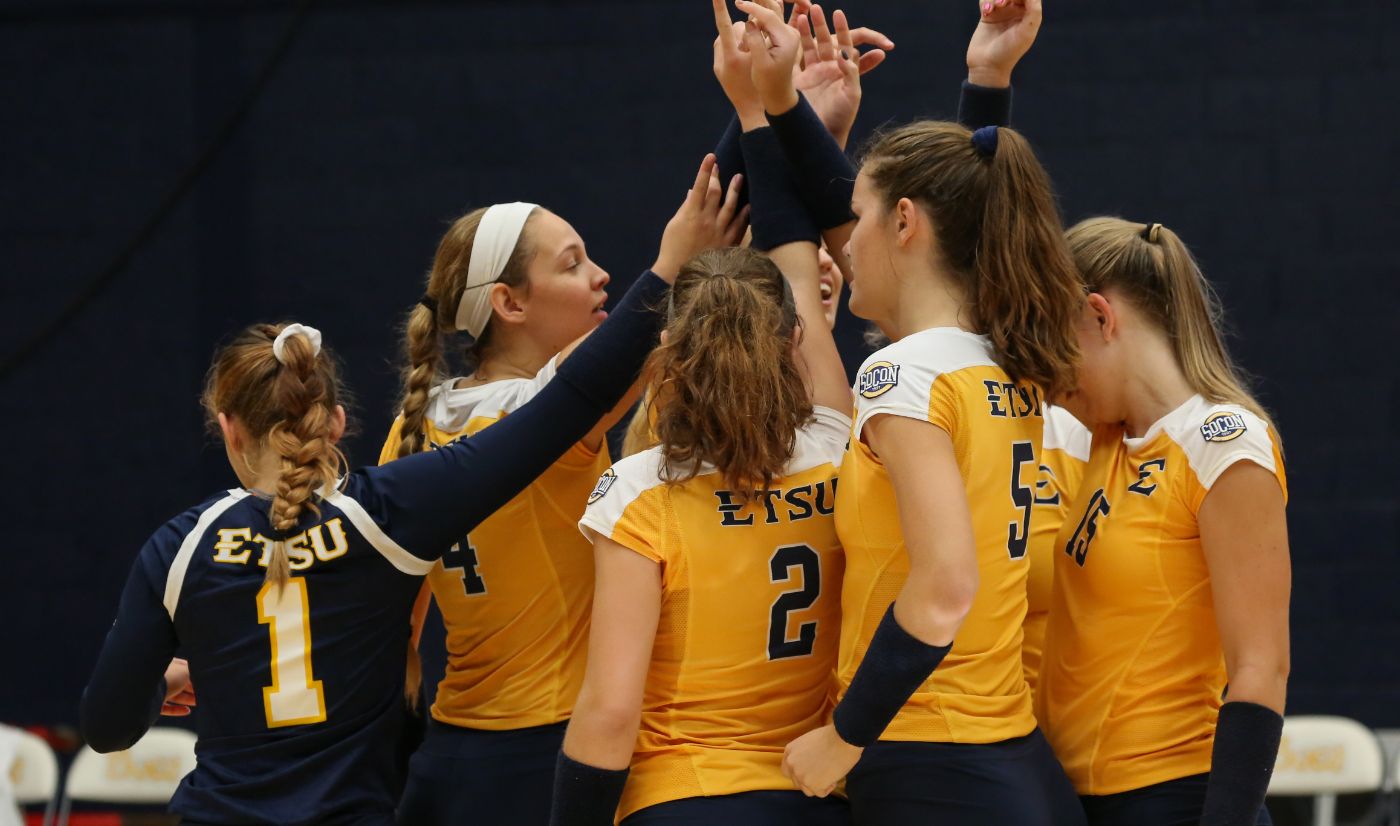 JOHNSON CITY, Tenn. (Sept. 8, 2016) - The ETSU volleyball team will travel to Clemson, S.C. to compete in the Clemson Classic this weekend. ETSU will open the Classic with matchups against Clemson (1:30 p.m.) and North Dakota (4:30 p.m.) on Friday before wrapping up the weekend with a 7 p.m. match against Tulane Saturday.

Scouting the Buccaneers
After two weeks of the collegiate volleyball season, the Bucs are one of just 26 teams in the country that are undefeated. ETSU, which is 6-0, wrapped up its second straight non-conference tournament championship with victories over Hampton, USC Upstate and Liberty at the Liberty Invitational last weekend.

ETSU has had a varied offense through the early going of the 2016 season as it has three different players that have 60 kills or more. Leading this group is Rylee Milhorn (Kingsport, Tenn.) who has 72 kills but nipping at her heels are fellow outside hitters, Briana Allmon (Flower Mound, Texas) and AJ Lux (Shelbyville, Ind.) who have 66 and 60 kills, respectively.

Much like last season, the defense has been a strength for ETSU in 2016. The Bucs have held their opponents to the lowest hitting percentage in the SoCon (.116). Freshman Kaela Massey (Brentwood, Tenn.) has been a major contributor as she was named the SoCon’s Defensive Player of the Week on Monday. ETSU has also been stellar on the backline as Hailey Aguilar (Oswego, Ill.) is sixth in the conference averaging 4.42 digs per set.

Scouting the Opponents
Clemson: The Tigers have nearly matched their win total from 2015 (6) already this season as their record currently sits at 3-3. A major reason for Clemson’s success has been the play of Leah Perri and Keely Hayes. Perri leads the ACC with 119 kills, while Hayes paces the league with 290 assists. Both marks rank 17th and 14th in the nation, respectively.

North Dakota: UND is coming into the weekend with a 4-4 record after posting a 21-win season in 2015. The Fighting Hawks are a defensive oriented squad as they rank in the upper half of the Big Sky in blocks, digs and opponent’s hitting percentage. Jordan Vail has been at the heart of these defensive numbers for North Dakota with 31 total blocks.

Tulane: The Green Wave have their record at the .500 mark through two weekends of action. Tulane swept the Southern Miss Tournament to open its season but dropped all three matches at the All-State Sugar Bowl Tournament last weekend. Dayne Kearn has been the Green Wave’s top player in 2016 as she currently leads the American Conference with 31 blocks.

First Time Since...
The Bucs are off to one of their best starts in program history this fall as they currently boast a 6-0 record. The only other time the Bucs began a season with six straight victories was in the 1987 season. In addition to the 6-0 start, ETSU has also been dominant in its victories as it has just dropped one set all season long.

Massey is named SoCon Defensive Player of the Week
Kaela Massey was named the SoCon Defensive Player of the Week Monday by the league office. Massey continued to be a major reason why the Bucs’ are off to a 6-0 in 2016 in last weekend’s Liberty Invitational. For the tournament, the freshman from Brentwood, Tenn. totaled 16.0 blocks and averaged 1.60 blocks per set. Her most impressive performance came against USC Upstate on Saturday as she collected seven blocks and a career-high 11 kills against the Spartans.

Terrific Trio
ETSU’s offense has been firing on all cylinders this season as it currently leads the SoCon with a team hitting percentage of .288. That mark is 47 percentage points ahead of second place Chattanooga (.241). The trio of Rylee Milhorn, Briana Allmon and AJ Lux has been a major reason why the Bucs have been so succesful as all three are in the top 10 in the conference in terms of kills.

Bucs on the national leaderboards
Due to their fast start, the Bucs as a team rank in high in several national statistical categories including: assists per set (6th - 14.00), kills per set (9th - 14.79) and opponent’s hitting percentage (10th - 0.116).

Series History vs. Opponents
The Bucs have not encountered their three opponents this weekend too often in past seasons. ETSU will be looking for its first ever win against Clemson as the Tigers have won all six matches between the two teams including 3-1 win in 2015. The matchup against the North Dakota will be the first ever meeting between the two schools, while matchup with Tulane will be just the second. The Green Wave defeated the Bucs in their lone previous meeting, 3-1, in the 1994 season.