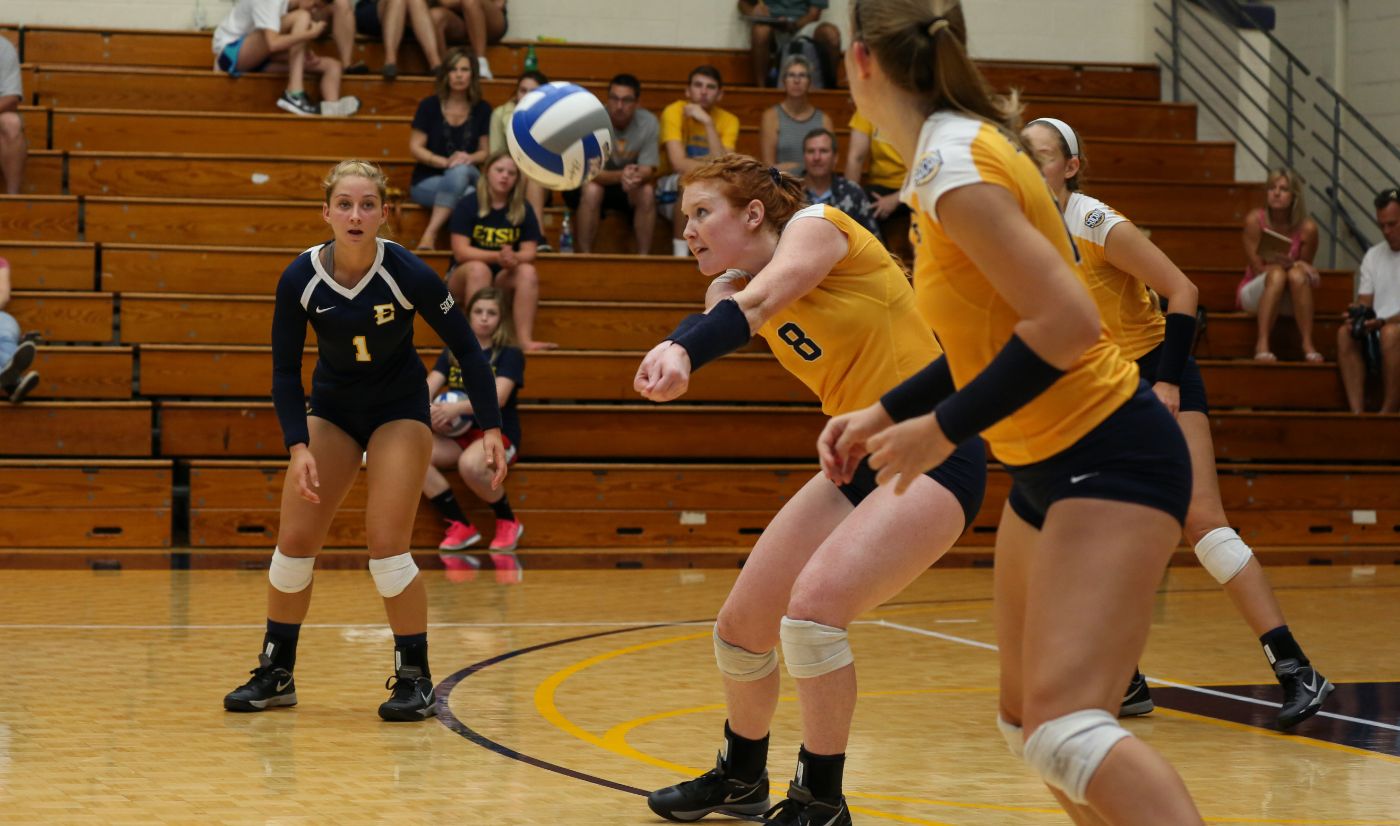 TUSCALOOSA, Ala. (Sept. 15, 2016) - The ETSU volleyball team will close out the non-conference portion of its schedule this weekend with three matches at the Crimson-White Tournament in Tuscaloosa, Ala. ETSU will take on Presbyterian at noon before taking on Alabama at 8 p.m. on Friday. The Bucs will wrap up the weekend with a tilt against Georgia Southern with that match scheduled for a 3 p.m. start time.

Scouting the Buccaneers
The Bucs will look to get things back on track this weekend in Tuscaloosa after dropping all three matches last weekend at the Clemson Classic. Despite the three losses, the Bucs’ record sits at 6-3 on the season, which is the most wins of any SoCon team so far this season.

One of the keys to ETSU’s 6-3 start has been its varied offense. The Bucs have had five different players reach double figures in kills in at least one match in 2016. Rylee Milhorn (Kingsport, Tenn.) has been the most consistent contributor as she has reached 10 kills in eight of the nine matches this season.

In addition to their work offensively, the Bucs have also been consistent defensively. ETSU is currently holding opponents to a SoCon-low .169 hitting percentage in 32 sets. Pacing these efforts has been Kaela Massey (Brentwood, Tenn.). The freshman middle blocker leads the conference averaging 1.28 blocks per set.

Scouting the Opponents
Presbyterian: The Blue Hose have struggled this season as they have dropped eight straight matches after starting 2-0. Presbyterian’s two wins on the season were both 3-0 sweeps over South Carolina State and Mississippi Valley State.

The strength of Presbyterian’s team has been on the serve. Nationally, the Blue Hose are 13th in service aces per set (1.94). Mikayla Register is a major reason for this success as she is fifth in the nation with 21 aces.

Alabama: Alabama is off to a hot start in 2016 as it has won eight of its first 10 matches with both defeats coming in five sets. The Crimson Tide possess a potent offensive attack led by Krystal Rivers. Rivers not only leads the SEC with 213 kills but she also is fourth in the nation in that category.

Georgia Southern: After finishing the 2015 season nine games under the .500 mark, Georgia Southern has rebounded with a 6-5 record so far in 2016. Leading this turnaround has been the defensive duo of Lauren Reichard and Alex Beecher. Reichard has the 12th-most blocks in the country (55), while Beecher ranks 20th nationally with 207 digs.

Quick Hits
Start Strong
One major key to the Bucs’ success so far this season has been starting quickly. When ETSU wins the first set, it holds a record of 5-0 but on the flipside it is just 1-3 when the opponent wins the first frame.

Set up for Success
ETSU has used a somewhat untraditional method this season has it has rotated both Kristen Favre (Plano, Texas) and Alyssa Kvarta (Crown Point, Ind.) through the setter position. Though untraditional, the gameplan has worked out well as ETSU leads the SoCon averaging 13.34 assists per set.

Dynamic Duo
The Bucs’ league leading offense has mainly ran through the duo of Briana Allmon (Flower Mound, Texas) and Rylee Milhorn this season. The two outside htiters for ETSU nearly have identical numbers in kills (115 to 113) and attack percentage (.249 to .253).

Hitting their mark
The offense has been extremely productive in the early part of the season for ETSU. In fact if the Bucs can maintain their current attack percentage (.256) it would break the school record for team hitting percentage in a season (.247 - 2013).

Series History vs. Opponents
ETSU has matched up with Presbyterian four times in the past six seasons. The Bucs have won three of the four meetings including a 3-0 victory last season. The Blue Hose’ lone win came in 2011.

Alabama and the Bucs have met just twice prior to Friday with the two meetings occurring in 1998 and 2002, respectively. The Crimson Tide came out on top in both contests by identical 3-0 final scores.

Georgia Southern has played ETSU a total of 27 times with the first meeting happening in 1992. ETSU has defeated the Eagles 15 times in those 27 meetings, but GSU knocked off ETSU in the last matchup in 2010.