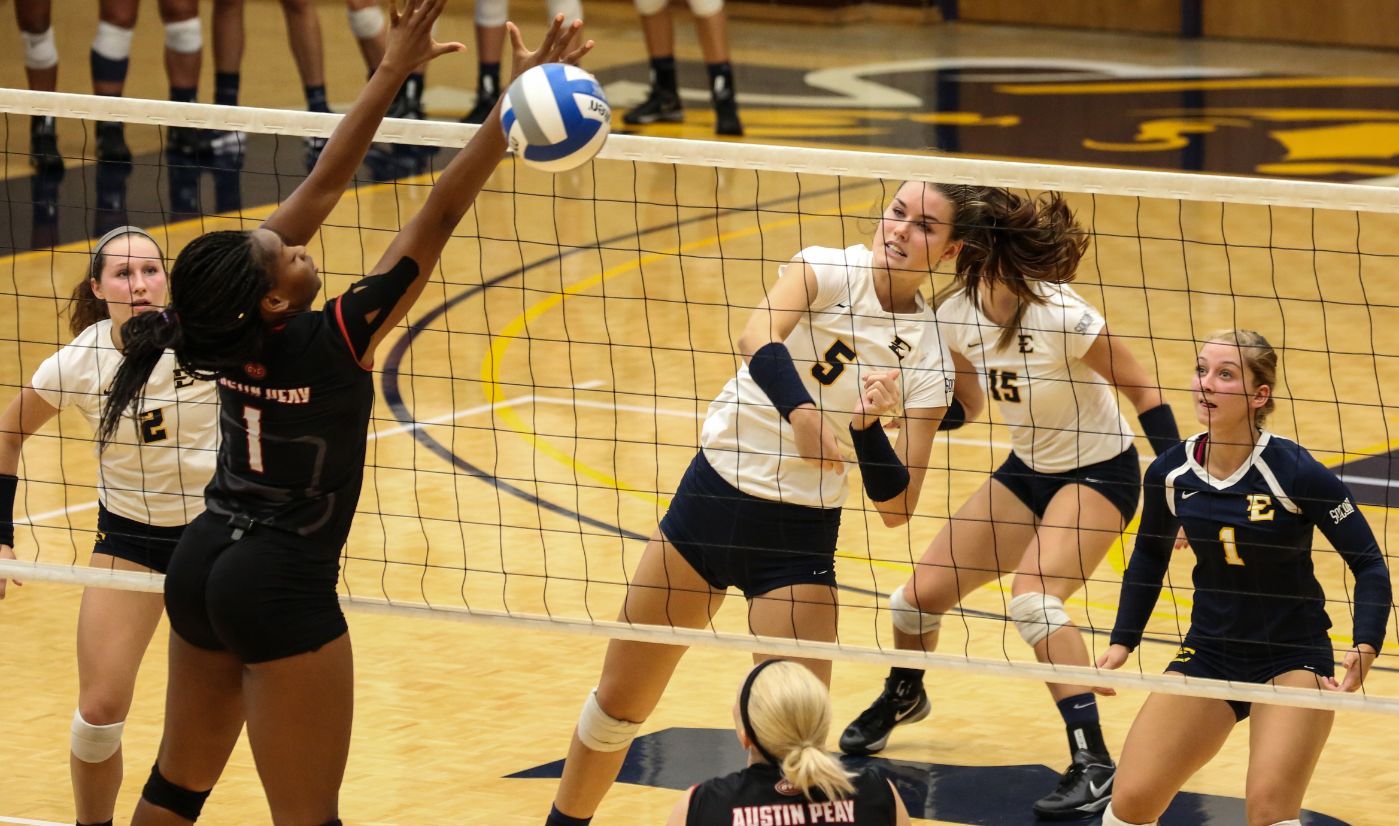 ETSU looks for a strong weekend as it enters conference play

JOHNSON CITY, Tenn. (Sept. 22, 2016) - The ETSU volleyball team will lift the lid on its SoCon schedule this weekend with a pair of road matches. ETSU will open the weekend with a match at Furman before traveling to Alabama for the second time in as many weeks to take Samford on Saturday. First serve for the matches are scheduled for 6 p.m. and 8 p.m., respectively.

Scouting the Buccaneers
The Bucs closed out the non-conference portion of their schedule last weekend at the Crimson-White Tournament in Tuscaloosa, Ala. ETSU picked up a pair of 3-0 sweeps over Presbyterian and Georgia Southern but dropped a 3-1 decision to Alabama.

ETSU’s offense has been the most efficient in the SoCon through the early portion of this season. The Bucs lead the conference in hitting percentage (.253), assists per set (13.29) and kills per set (14.14).  A major reason for this success can be traced to the trio of Rylee Milhorn (Kingsport, Tenn.), Briana Allmon (Flower Mound, Texas) and AJ Lux (Shelbyville, Ind.). All three players rank in the top 10 in the SoCon in terms of kills per set, while Lux is second in hitting percentage (.342).

Defensively, the Bucs have been varied as well as five different players have posted at least one double-digit dig match this season. Hailey Aguilar (Oswego, Ill.) has been the most consistent in terms of digs and totaled a season-high 19 digs at Alabama last Friday. Meanwhile on the block, ETSU is paced by Brentwood, Tenn. native Kaela Massey. Massey, who helped Brentwood High School win three state championships, ranks third in the SoCon averaging 1.15 blocks per set.

Scouting the Opponents
Furman: A season after representing the SoCon in the NCAA Tournament, Furman holds a record of 4-8 heading into Friday’s conference opener. The Paladins have played a fairly tough schedule, however, as their eight losses came to teams that collectively have a record of 56-44 this season.

On the court the Paladins are led by the reigning SoCon Player of the Year Annie Bierman and a veteran head coach in Michelle Young. Bierman led the conference with 467 kills in 2015, while Young is in her 16th season as the head coach of the Paladins.

Samford: The Bulldogs enter SoCon play with some momentum as they have won their last three matches. The victories were against UTEP, New Mexico and Houston Baptist in Arlington, Texas.

Individually, the standout performer so far this season for Samford has been its setter, Erika Pifer. Pifer ranks 20th nationally with 542 assists and has a lead of nearly 100 assists on SoCon leaderboard in assists (Logan Smith - The Citadel, 432 assists).

Quick Hits
Done in Three
Of its 12 matches so far this season, eight of them have lasted just three sets. ETSU has faired well in those three-set contests with a record of 7-1. Comparatively, the Bucs are 1-3 when the match goes longer than three frames.

Bucs in the SoCon
The Bucs will begin their 24th season as a member of the SoCon in volleyball on Friday. In the previous 23 campaigns, ETSU holds a record of 165-130.

Serve for success
A major key for ETSU to be successful is its ability to out-serve its opponents. When the Bucs have more service aces than its opponent it holds  a record of 6-1 compared to 2-3 when the opposition holds the edge in that category.

Sophomores stepping up
ETSU’s sophomore class has been extremely productive this season. All five sophomores on the roster have started at least three matches. Leading the sophomores has been AJ Lux who has made 18 straight starts. Lux currently is third on the team with 126 kills and that is the most of any sophomore in the SoCon.

Series History vs. Opponents
The Bucs will look to reverse a recent trend against Furman Friday as it has lost back-to-back matches to the Paladins. Furman is the only team in the SoCon that ETSU has yet to beat since its return to the conference in 2014. Overall, the Paladins hold a 28-21 lead in the all-time series with the Bucs’ last win coming in 2013.

On the flip side, ETSU and Samford have met just five times with all of those matchups occuring in the last two seasons. The Bucs have won three of the five including a thrilling 3-2 win over the Bulldogs in the SoCon Tournament last season.