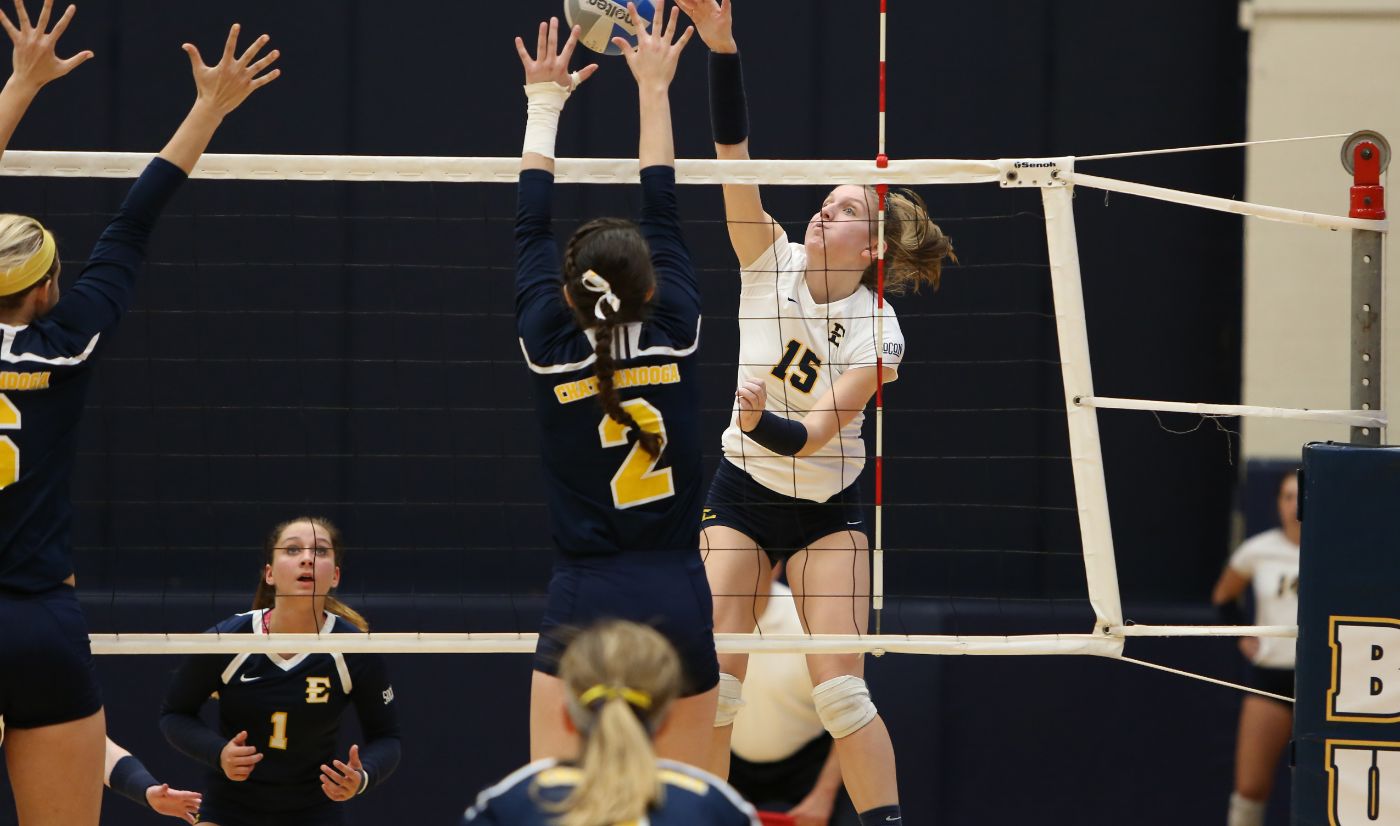 Scouting the Buccaneers
ETSU split a pair of five-set matches last weekend at Furman and Samford. The Bucs dropped the match to the Paladins Friday before rebounding to defeat the Bulldogs on Saturday. With the results last weekend, the Bucs’ record sits at 9-5 overall and 1-1 in SoCon play.

The Buccaneer offense has not only been been productive in the season’s first month but it has also been one of the most varied. ETSU has three diferent players that average over three kills per set, two others that average eight assists per frame and four that have reached double figures in service aces. The variance in the Buccaneer attack has also been true defensively as four different players are averaging at least two digs per set. This approach has served the Bucs well as the team leads the SoCon with a .246 hitting percentage and ranks second in the confernce in opponent hitting percentage (.182).

Invidually, the Bucs have had several key contributions to their early season success. Preseason All-SoCon selections Briana Allmon (Flower Mound, Texas) and Rylee Milhorn (Kingsport, Tenn.) have not disappointed as they rank No. 1 and No. 2 on the team in kills with totals of 182 and 164, respectively.

ETSU has also received a boost from both its sophomore and freshman classes. Sophomores AJ Lux (Shelbyville, Ind.) and Hailey Aguilar (Oswego, Ill.) have been especially impressive. Lux is third on the team with 163 kills and currently is ranked second in the SoCon with a .328 percentage. Aguilar, meanwhile, has served as the team’s libero for most of the season and leads the team with 204 digs (4.00 D/S). Freshman Kaela Massey (Brentwood, Tenn.) has also made the most of her opportunities as she currently ranks second in the conference averaging 1.16 blocks per set.

Scouting the Opponents
Chattanooga: The Mocs are looking to regain their 2015 form where they went 26-6 en route to winning the regular season championship in the SoCon. The 2016 edition of Chattanooga has a record of 7-7 and 0-1 in conference play through the first month of the season.  Despite being right at the .500 mark, the Mocs have had some bright moments including a set victory in a match against then-No. 4 Kansas.

Chattanooga is led by a pair of Preseason All-SoCon selections in Allie Davenport and Kristy Wieser. Davenport and Wieser rank first and second on the Mocs with 143 and 117 kills, respectively.

Quick Hits
Two and Three
ETSU is a combined 22-6 in the second and third sets this season. Comparitvely, in the first, fourth and fifth sets the Bucs hold a record of 12-12.

Freshman Standout
Freshman middle blocker Kaela Massey posted a stellar weekend to open up SoCon play last week.  Through matches against Furman and Samford, Massey is tied for the lead in blocks (12) and service aces (4) in SoCon matches. Massey is also fourth in conference matches with a .378 hitting percentage.

Career-best for Lux
AJ Lux posted a career-high 20 kills in Friday’s match at Furman. Lux has reached double figures in kills in six of her last seven matches.

Series History vs. Opponent
The Bucs and Mocs met a total of three times last season. Chattanooga came out on top in all three matches by scores of 3-1, 3-2 and 3-1. Despite dropping three straight in the series, the Bucs still have the slight edge in the all-time series, 31-30. ETSU swept the season series in 2014 in its return to the Southern Conference.