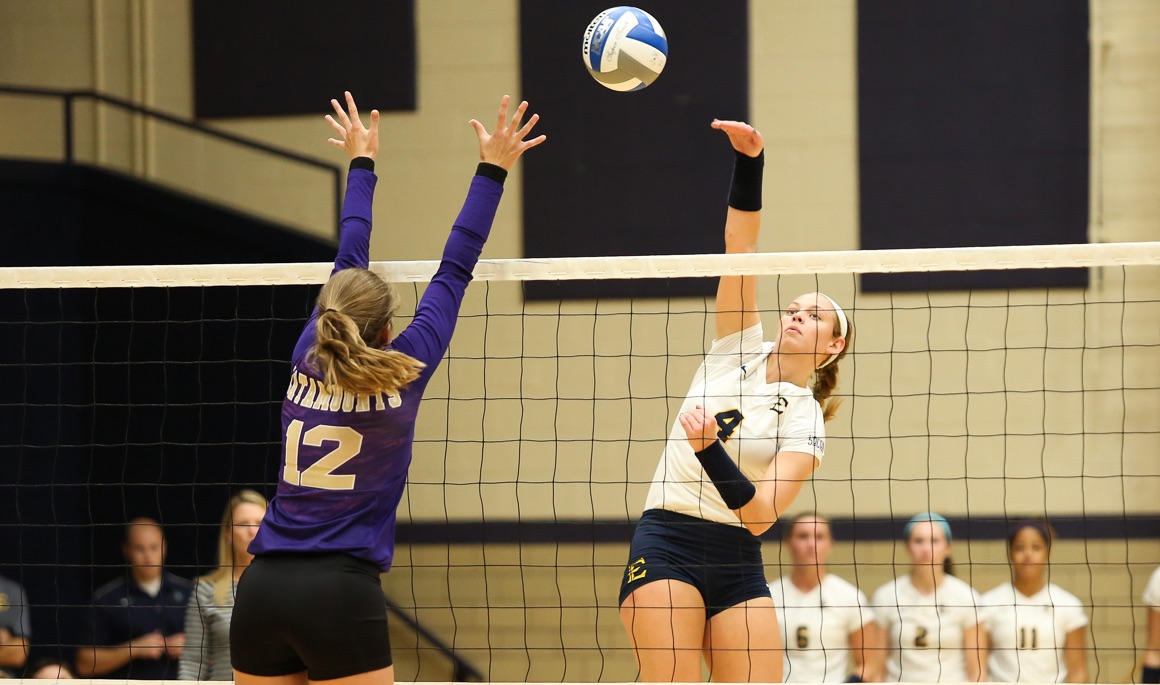 Allmon – who also totaled eight digs and three blocks – bested her previous high in kills by four as she tallied 24 kills against North Dakota back on Sept. 9. The 28-kill effort also marks the third highest by a Southern Conference player this season.

“It felt great to be back home playing inside Brooks Gym,” said head coach Lindsey Devine. “Our team had a great week of practice and really worked hard on the adjustments needed for tonight's match. Briana (Almon) played with a lot of intensity and confidence tonight. When we needed a big play she was ready and came out swinging. A key moment came in the fifth set when Renzey (Rice) made fearless defensive plays – which in my opinion – shifted momentum to our side. AJ (Lux) was solid on the court all night, and when we needed a block near the end of the match she responded. Hailey (Aguilar) also gave us a solid night with 24 digs. Rylee (Milhorn) stepped up as the match went on, especially when we needed her. We relied on both Kristen (Favre) and Alyssa (Kvarta), and they led their team to this win.”

Western Carolina won six of the first seven points – and despite ETSU rallying back to take a 16-14 lead – the Bucs were unable to hold on as the Catamounts took the opener, 25-22. The Blue and Gold began the match with a service error, while committing three straight attack errors to give the Catamounts the early lead. However, the Bucs battled – and with Aguilar serving – ETSU took its first lead of the night at 16-14. Unfortunately, Western Carolina used a 7-2 to run to go ahead, 21-18, and the Bucs were unable to come back as the Catamounts won the opener by three.

Despite dropping the first set, the Blue and Gold kept their composure by building a six-point lead midway through the frame and outlasted a late Catamount comeback to even the match with a 25-23 win in the second stanza. After both teams traded points early on, ETSU broke a 4-all tie by mounting an 11-4 run to go ahead, 15-8. The Bucs road the wave of strong blocking from Lux and Massey, along with pinpoint hitting by Lux and Milhorn, to open the 7-point advantage. The Catamounts had one last run in them as they used a 13-6 spurt to pull even at 21, but the Bucs managed to win four of the final six points to claim the win. Lux ignited the final rally with a kill and Favre found Allmon for the clinching point. Five different Buc players accounted for the 15 kills, while Massey posted three of her seven blocks in the frame.

Following intermission, the third set was nip-and-tuck, but Allmon scored the final three points for the Blue and Gold to secure ETSU a thrilling 29-27 win in set three. Neither team led by more than two points early on, but with the score knotted at eight, the Bucs scored four straight points to take a 12-8 lead. ETSU kept its advantage intact until kills from Abigail Veit and Aleah Keaton gave the Catamounts a 19-18 edge. The Bucs charged back by winning six of the next eight points to regain a 24-21 lead, but Western Carolina dodged three straight set points and used a 4-0 run to go back ahead, 25-24. From there, both teams traded points, but with the score tied at 27, Allmon slammed home a pair of kills to cap off the two-point win. As a team, ETSU out-hit the Catamounts, .250-.188, while Allmon hit a blistering .471 (9-1-17) in the set. The Bucs also out-blocked Western Carolina, 5-2.

The see-saw match continued as Western Carolina won the final four points of the fourth to force a decisive fifth set with a 25-21 victory. The Catamounts built a 14-9 lead, but ETSU chipped away to pull within one when a Massey service ace made it a 15-14 score. After Western Carolina went back ahead 21-17, the Bucs rattled off four consecutive points to tie it at 21, but the Catamounts returned the favor with four unanswered points of their own to claim the stanza.

The Bucs look to remain perfect at home as ETSU hosts UNCG on Saturday afternoon at 2 p.m., inside Brooks Gym.

For more information on Buccaneer volleyball, visit ETSUBucs.com and click on the volleyball link.