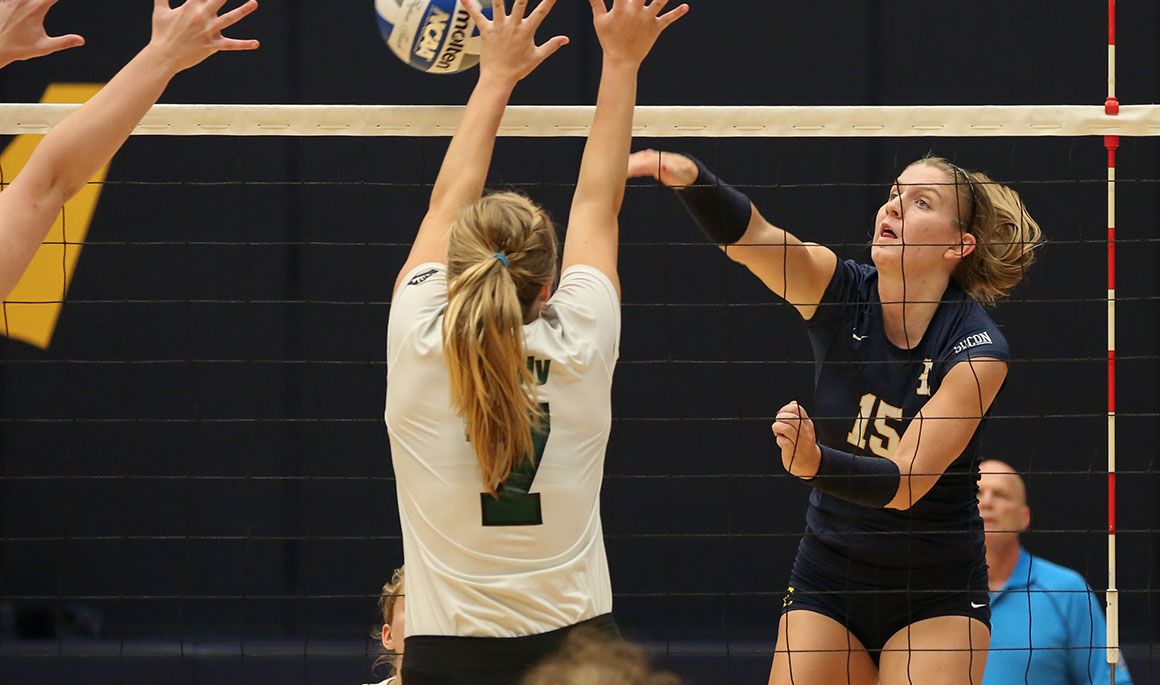 It’s the third straight victory for the Bucs over the Spartans with all three wins coming by way of three set victories. ETSU has remained solid against UNCG at home, having not lost a game to the Spartans in Johnson City since 2002.

“Brooks Gym is a great place for us to play, everybody wants to play well at home and the girls have such great pride in that,” said head coach Lindsey Devine.

Senior Briana Allmon (Flower Mound, Texas) led the Bucs with 15 kills while recording a .314 hitting percentage. On Friday, Allmon recorded a career-high 28 kills in a five set victory over Western Carolina. Junior Rylee Milhorn (Kingsport, Tenn.) was two kills away from recording her sixth double-double of the season, ending with eight kills and 16 digs.

“All week have been working on adjustments that we needed to make to execute our game plan,” said Devine. “Today based on what we had to do last night to get a five set victory over WCU, we played with greater confidence and everybody fulfilled their role.”

SET ONE
UNCG stormed out of the gate in the first set winning five of the first six points before ETSU responded with nine of the next 14 points to take a 10-9 lead. With the scored deadlocked at ten, two attack errors by the Spartans along with a kill from sophomore Bradeyn Tutton (Courtice, Ontario) forced UNCG to call the first timeout of the match.  Later in the match, the Spartans cut the ETSU lead to 21-20 before the Bucs recorded four of the next five points to take the first set, 25-21.

SET TWO
The Kingsport, Tenn., native Milhorn dominated in the second set registering six kills and had a staggering .455 hitting percentage. Freshman Kaela Massey (Brentwood, Tenn.) earned four kills in the set victory, hitting .429.  As a team in the second the Buccaneers hit .342. Late in the match, ETSU jumped out to their largest lead of the game at 19-12 before UNCG rallied with eight of the next 12 points to cut the Bucs lead to 23-20. However, kills by Milhorn and senior Kristen Favre (Plano, Texas) led ETSU to the 25-20 set victory

THIRD SET
It was all ETSU in the third as UNCG tied the score at 3-3 before the Bucs never looked back, never trailing the rest of the set in the 25-21 third set victory. In the third, Allmon had a blistering .500 hitting percentage with seven kills and four digs to propel ETSU. The Spartans were able to cut the deficit to one late in the set but two attack errors by UNCG and a kill by Milhorn helped ETSU secure the win.

NEXT UP
The blue and gold will be back at home inside Brooks Gym on Wednesday, Oct.12 to host rival Chattanooga. Match is set for 7:00 p.m.