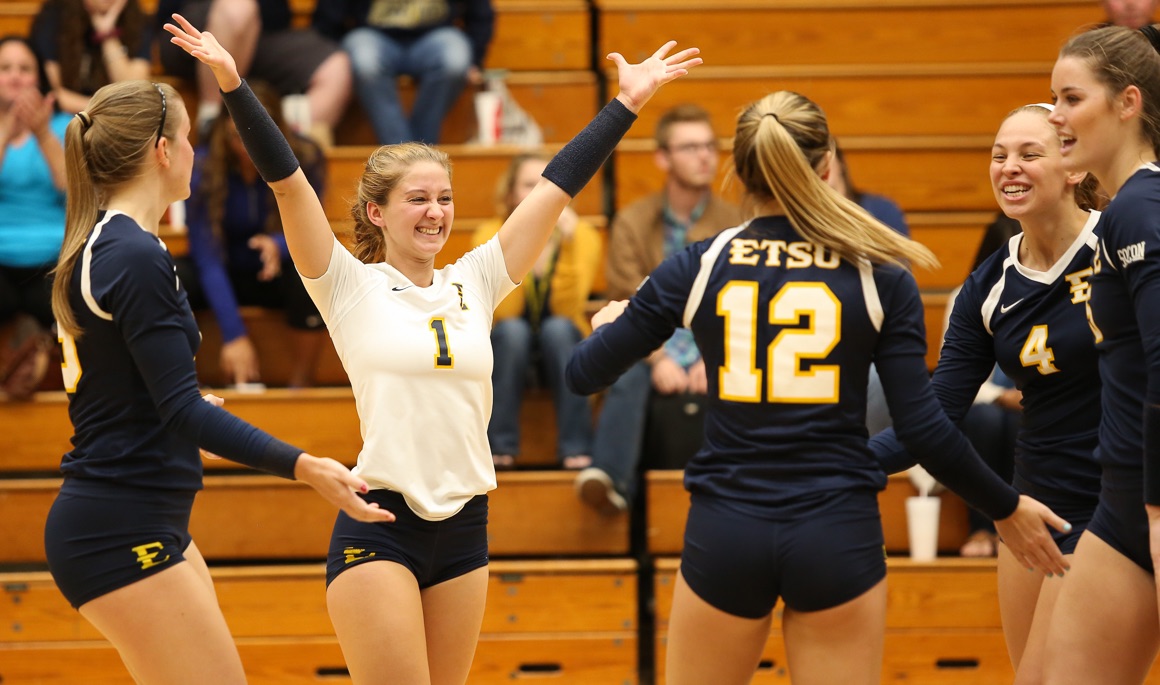 Improving to a perfect 6-0 inside Brooks Gym this season, the Bucs took an impressive 3-0 victory (25-18, 25-15, 25-20) over their rivals from Chattanooga thanks to a match high 14 kills from reigning Southern Conference Offensive Player of the Week and senior outside hitter Braina Allmon (Flower Mound, Texas).

“I thought we set ourselves up for this, last week with the back-to-back wins here in Brooks,” said ETSU head coach Lindsey Devine, referring to the team’s wins over Western Carolina and UNC Greensboro last weekend. “We knew UTC would give us a great match, but we put in a lot of work over the last few weeks and stuck to our game plan tonight. I’m really proud of the team.”

Along with Allmon, the Bucs got eight kills from sophomore AJ Lux (Shelbyville, Ind.), while junior Rylee Milhorn (Kingsport) finished with seven. In addition, ETSU senior Kristen Favre (Plano, Texas.) finished with a match high 18 digs and freshman Kaela Massey (Brentwood) posted a match high four blocks. As a team, the Bucs finished with a .259 attack percentage compared to a .119 mark (30-18-101), by the Mocs. ETSU was also plus-6 in service aces (6-0) and plus-3 in blocks (7-4). Favre and Massey both finished with two aces on the night.

After jumping ahead 4-1, the Bucs watched the Mocs tie it up at 4-4. However, from there ETSU outscored UTC 13-6 to build a lead of 17-10 and held the advantage the rest of the set. The Mocs did close to within six at 22-16, but a timeout by Devine led to the Bucs scoring three of the next five points to close out the first set victory at 25-18. Sophomore Braedyn Tutton (Courtice, Ontario, Canada) was fantastic with a team high five kills and a .833 hitting percentage in the first set, while Allmon and Lux had three kills each for the Bucs.

The story of the second set was a dominating 13-0 run by the Bucs that ultimately ended with ETSU leading 17-4. From there, the Bucs continued to roll and finished with the 25-15 win. Lux and Allmon once again powered the ETSU attack with five kills each, with Lux posting a .714 hitting percentage. Meanwhile, Aguilar collected 12 digs in the second set. Sophomore setter Alyssa Kvarta (Crown Point, Ind.) served the Bucs during the massive 13-0 run.

While the Bucs were dominant in the first two sets, the Mocs put up a fight at the end, holding the lead much of the way in the third set and holding a 16-15 edge at one point. However, a 6-2 run by the Bucs put them up 21-18 and forced a timeout by UTC head coach Travis Filar. While the Mocs got back to within one at 21-20, the Bucs scored the final four points of the match, with Massey teaming up with Lux and Allmon for a pair of blocks to get points 23 and 24, and then Allmon put the match away with her 14th kill of the night.

NEXT UP
The Buccaneers will be back on the road in SoCon play this weekend, taking on Wofford this Friday at 7 p.m. in Spartanburg, S.C., followed by a matchup with Western Carolina on Saturday at 6 p.m. in Cullowhee, N.C.