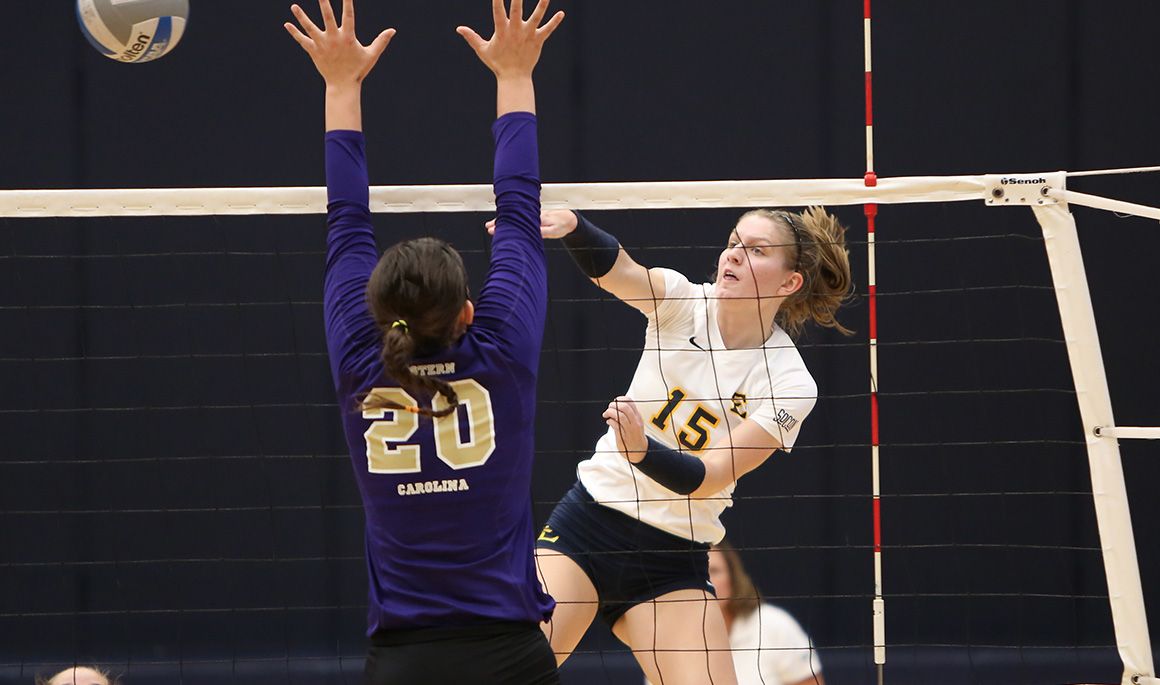 The Buccaneers extended their five game winning streak and stayed atop the Southern Conference standings behind junior outside hitter Rylee Milhorn (Kingsport, Tenn.) season-high 17 kills and .382 hitting percentage. Milhorn recorded her fifth double-double of the season with 17 kills and 13 digs.

ETSU improves their overall record to 14-6 and 6-2 in SoCon play while Western Carolina drops to 8-13 and 3-5 in conference play.

FIRST SET:
The Catamounts came out firing in the first set racing out to a 10-4 lead over the Bucs before ETSU had to take a timeout. After the timeout, ETSU quickly stormed back scoring six of the next nine points to cut into the Catamount lead. Later in the set and ETSU trailing 19-18, the blue and gold rallied with four straight points and seven of the next nine points to take a 22-20 lead. A service ace by Kristen Favre and a kill by Mariah McPartland propelled the Bucs down the stretch to a 25-22 first set victory. The Bucs recorded a hitting percentage of .278 and had four service aces. It was the 12th first set win of the season for the Bucs and fourth in the Southern Conference.

SECOND SET:
ETSU dominated the second set never trailing as they took a 2-0 lead with a 25-16 second set victory. Rylee Milhorn shut down the Catamounts in the second set recording eight kills. To begin the set the Bucs raced out to a 4-0 lead with Milhorn recording the first of her eight kills in the match followed by three straight Western Carolina errors. The Catamounts cut their deficit to two after scoring three straight points thanks to two ETSU errors and a kill by Katie O’Connor. Despite the WCU momentum, the Bucs were able to score 16 of the next 21 points to extend their lead. An attack error by Western Carolina’s Aleha Keaton and a kill by Milhorn ended the second set as the team recorded 16 kills and had a hitting percentage of .261.

THIRD SET:
It was a back and forth battle in the third set as the Bucs and Catamounts alternated the first 18 points before kills by Kaela Massey, Briana Allmon and Mariah McPartland gave ETSU a 12-9 lead. The set once again was tied back up at 17-17 after Western Carolina recorded two kills from Moea Osbey and Jo-Leigh VerVelde followed by an attack error by the Bucs. Near the end the teams rallied back and forth again with ten straight points alternated before a kill by the Catamounts and an ETSU attack error resulted in WCU taking the third set, 25-23. Both teams registered 18 kills in the set with the Catamounts recording a staggering .421 hitting percentage.

FOURTH SET:
In the fourth set the Bucs never trailed for the second time in the match as the Bucs raced out to a 6-1 lead. The closest the Catamounts got in the set was 10-7 after a kill, a service ace and an ETSU error. From that point it was all Buccaneers as they registered nine of the next 11 points to secure a 17-8 advantage. Western Carolina recorded three straight points to cut into the ETSU lead before the Bucs scored the final six points of the set to take a 25-12 set victory. The Bucs had 15 kills with a hitting percentage of .312 compared to Western Carolina’s .067 hitting percentage.