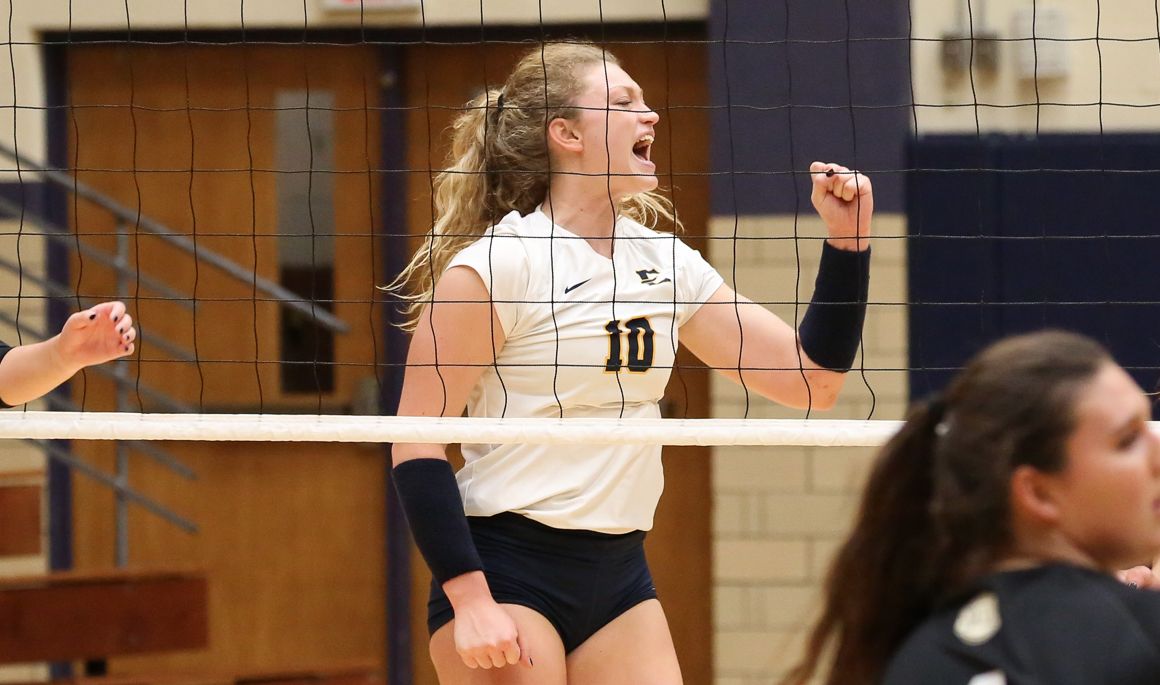 JOHNSON CITY, Tenn. (Oct. 21, 2016) – For two weeks in a row, ETSU senior outside hitter Briana Allmon (Flower Mound, Texas) has been named the Southern Conference Offensive Player of the Week. She showed again Friday night that she is worthy of the recognition.

Allmon collected another match high 18 kills and posted a .255 hitting percentage to power the first-place Buccaneers past Mercer 3-0 (25-19, 25-19, 25-21) in Southern Conference volleyball action at Brooks Gym. With the victory, the first-place Bucs won for the sixth straight time and maintained their perfect 7-0 record inside Brooks Gym this season, improving to 15-6 overall, 7-2 in SoCon play. At home, the blue and gold have won 10 straight sets.  Meanwhile, Mercer dropped to 11-9, 3-5.

“We are really tough to play at home right now and we have a great home court advantage,” said ETSU head coach Lindsey Devine, whose team currently holds sole possession of first place in the conference standings. “I thought we were in system throughout the night and our set distribution was really good. We were finding one-on-ones for our attackers. Defensively, we scrambled for balls and that’s something that earlier in the year we weren’t doing. I think we are in the mindset now to go after everything.”

The 3-0 win marked the 27th time over the past three years the Bucs have shut out an opponent, and over the last two seasons, ETSU has managed that feat 11 times in each season.

SET ONE:
After taking a 9-6 lead early on, the Bucs watched the Bears go on a 5-1 scoring run to gain an 11-10 advantage midway through the first set. However, at that point ETSU scored 12 of the next 15 points to take its largest lead of the opening set at 22-14 and finished off the win, 25-19. Allmon led the attack for the Bucs with seven kills and a .316 hitting percentage, while Aguilar collected nine digs in the first set.

SET TWO:
The second set was a back-and-forth battle initially, with Mercer taking a precarious 8-7 lead. ETSU finally managed to put together an offensive surge and went on a 7-2 run, taking a 14-10 advantage and forcing a timeout by the Bears. The Bucs kept the pressure on despite the break from action, scoring five of the next seven points to go up 19-12 and leading to another Mercer timeout. The attempts to stymie the ETSU momentum failed, as the Bucs went on to take a 25-19 victory in the second set. Allman again stood out for the Bucs, posting another seven kills and posting a .700 hitting percentage in the second set.

THIRD SET:
Mercer again led in the early stages of the third set at 9-7, but as they had throughout the first two sets, the Bucs rallied with seven straight points to gain a 14-9 advantage and force a Mercer timeout. From there, the two teams basically traded points the rest of the way and the Bucs ultimately took a 25-21 win to close out the match, 3-0. Junior Rylee Milhorn (Kingsport) and Lux led the way in the third set with five kills each, while Aguilar added another six digs.

NEXT UP
The Buccaneers will be back in action again on Saturday afternoon, hosting The Citadel at 2 p.m. inside Brooks Gym.