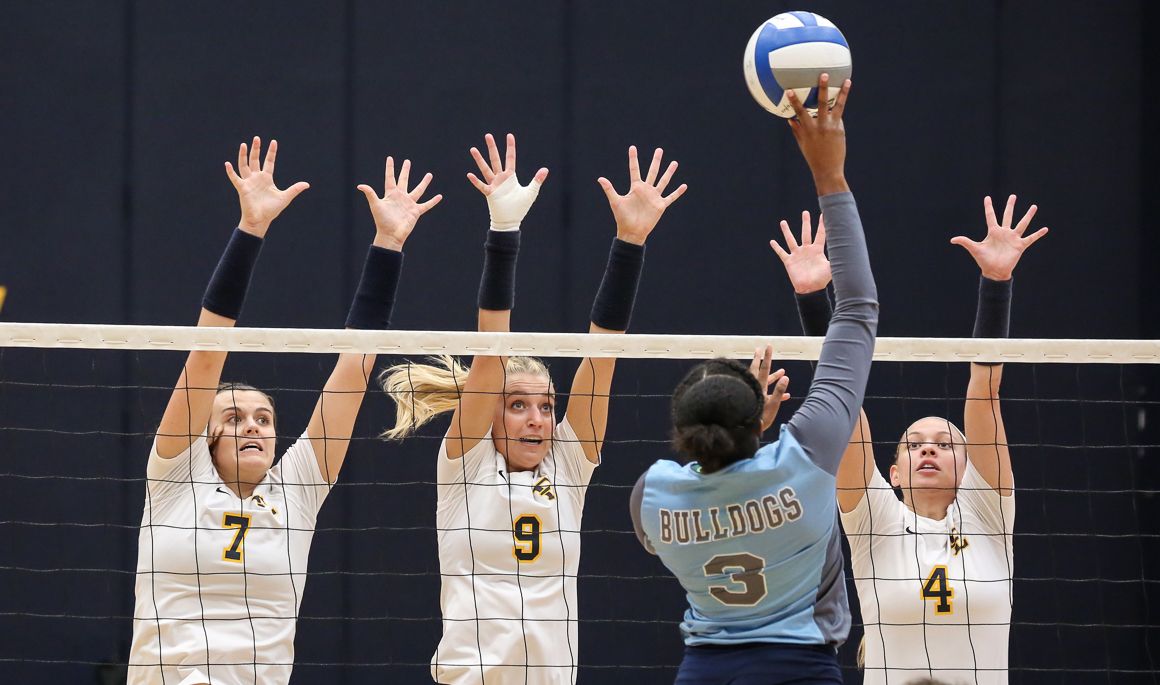 It’s the seventh straight victory for the Bucs this season, their longest winning streak of the season and longest since a nine-game winning streak back in 2013. ETSU improved their home record to 8-0 and hasn’t dropped a set at home since Oct.7 versus Western Carolina. The blue and gold clinched their 12th three-set win this season, the most since having a program-record 15 back in 2010.

"We have a lot of confidence and a lot of belief in what we are able to do," said head coach Lindsey Devine. "The players are putting in the work on the front end and reaping the benefits of it in games. Everyday we have been working hard and competing."

Defensively, freshman Kaela Massey (Brentwood, Tenn.) had a team and match-high six blocks with Allmon pitching in with four blocks. The blue and gold totaled 10 blocks on the afternoon, the third most in a match this season. The win improves ETSU's overall record to 16-6 and the Bucs remain in first place in the Southern Conference at 8-2.

"We know that the last half of the schedule everyone is going to bring their best game," said Devine. "It is easier to be the hunter instead of the hunted and right now we are being the hunted. However, I think our girls are embracing that and are playing with confidence and trusting each other."

SET ONE
ETSU jumped right out of the gate against the Bulldogs scoring 10 of the first 15 points. The Citadel regrouped and scored seven of the next 11 points to cut the ETSU lead down to two. After both teams traded points, the Bucs maintained a 21-18 lead before the blue and gold rattled off five consecutive points to take the first set. The Bucs scored the final five points with back-to-back kills by Lux followed by a block by freshman Braedyn Tutton (Courtice, Ontario) and Lux. The end the set, freshman Aya Lechin (Deerfield Beach, Fla.) served up an ace to give ETSU the 25-18 set victory.

SET TWO
It was a dominating second set for ETSU as the Buccaneers hit a staggering .536 compared to The Citadel’s .121. Allmon recorded six of her team-high nine kills in the second set with junior Rylee Milhorn (Kingsport, Tenn.) and AJ Lux each having three kills. After the Bulldogs took their first lead of the match, it was all ETSU from there as the Bucs embarked on a 15-3 run to take control of the set. Down the stretch sophomore Hailey Aguilar (Oswego, Ill.) took over, serving the Bucs to five straight points as ETSU took the second set in convincing fashion, 25-12.

SET THREE
The third set proved to be a back and forth battle between the Bucs and the Bulldogs. Through the first 17 points, The Citadel clawed their way to a 9-8 lead over ETSU. With the set tied at 10-10, ETSU flexed their muscles one more time scoring eight of the next 12 points to take an 18-14 lead. The Bucs scored the final seven points with two of the points coming off of Rylee Milhorn kills to hand ETSU the third set, 25-16.

WHAT’S UP NEXT:
ETSU will put their perfect home record on the line next weekend as they host the Terriers of Wofford on Friday, Oct.28 at 6:00 p.m. The Bucs will then hit the road on Saturday, Oct.29 for a showdown with UNC-Greensboro at 5:00 p.m.