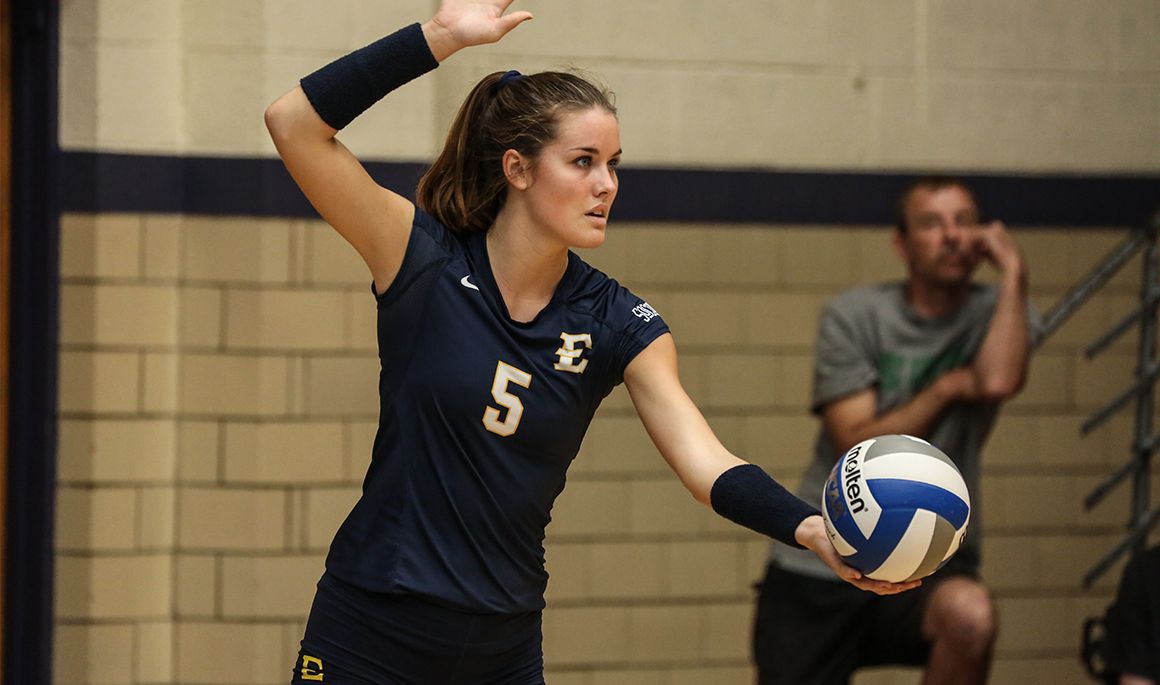 ETSU remains a perfect 9-0 at home this season

ETSU improved their record to a perfect 9-0 at home during the 2016-17 campaign and have won 16 straight sets at home. It was the 13th sweep of the season for ETSU which ranks as the fourth most all-time in a single-season. Of the 13 three-set victories, eight have come at home in Johnson City.

"We knew coming in that we had to touch some balls on the frontcourt and looking at the numbers I am happy with the blocks because we are tough at the net," said head coach Lindsey Devine. "It wasn't our cleanest game for us but right now we have the will to win and we are going to keep battling."

Despite hitting a season-low, .118, the Bucs were able to hold the Terriers to a .070 hitting percentage, the third lowest for an opponent this season. Once again the defense led the way as the Bucs tied a season-high with 11 total blocks. Freshman Kaela Massey (Brentwood, Tenn.) recorded a career and season-high seven blocks for ETSU in the sweep.

"We had the advantage to stay composed and that is the identity that we want to have is that we can be composed and get back into a rhythm," said Devine. "I contribute that to our setters keeping us calm on the court and putting the ball into the hitters hand."

The victory improves ETSU’s overall record to 17-6 and 9-2 in conference play to stay atop the Southern Conference.

FIRST SET
The Bucs were challenged early in the first set as the Terriers jumped out to 10-2 lead. After ETSU scored the first two points of the match, Wofford scored 10 straight points with six coming off of Buccaneer errors. However, ETSU was able to mount a comeback as they scored 17 of the next 23 points including nine straight to take a 19-16 lead. Senior Kristen Favre (Plano, Texas) ignited the run with nine straight serves, collecting one ace. During the 9-0 run, Wofford committed five attacking errors. Wofford then made a run of their own scoring four straight points to knot the game up at 20-20. Back and forth the Bucs and Terriers went until the final point when Milhorn recorded one of her 10 kills on the night to give ETSU the 25-23 set victory.

SECOND SET
Back and forth each team went in the second set as through the first 17 points, the Bucs held on to a slim 10-7 lead. ETSU then rattled off five straight points highlighted by sophomore Hailey Aguilar (Oswego, Ill.) registering an ace followed by fellow sophomore Mariah McPartland (Boone, Iowa) recording a monstrous kill down the line to give ETSU a 14-8 lead. After Wofford answered back, the Bucs went on a 4-0 run thanks in large part to three Wofford errors. The Terriers were able to battle back scoring six straight points to get within one point before the Bucs showed their dominance and took the second set, 25-21. Kaela Massey dominated the Terrier defense in the second set recording five of her six kills in the second.

THIRD SET
Coming out of the locker room, ETSU was able to assert their dominance as the Bucs recorded 12 kills in the second set to earn the three-set victory. Through the first 22 points the Bucs and Terriers were deadlocked at 11-11 before ETSU stormed away with four consecutive points to take the lead for good. ETSU recorded five of the final eight points as the Bucs got a solo block and a kill from Braedyn Tutton during the rally to give the blue and gold their 13th sweep of the season.

WHAT’S AHEAD?
Up next for the Bucs is a road trip to Greensboro, N.C. on Saturday, Oct.29 for a showdown with UNCG in a battle of the top two teams in the Southern Conference. Match is set for 5:00 p.m.