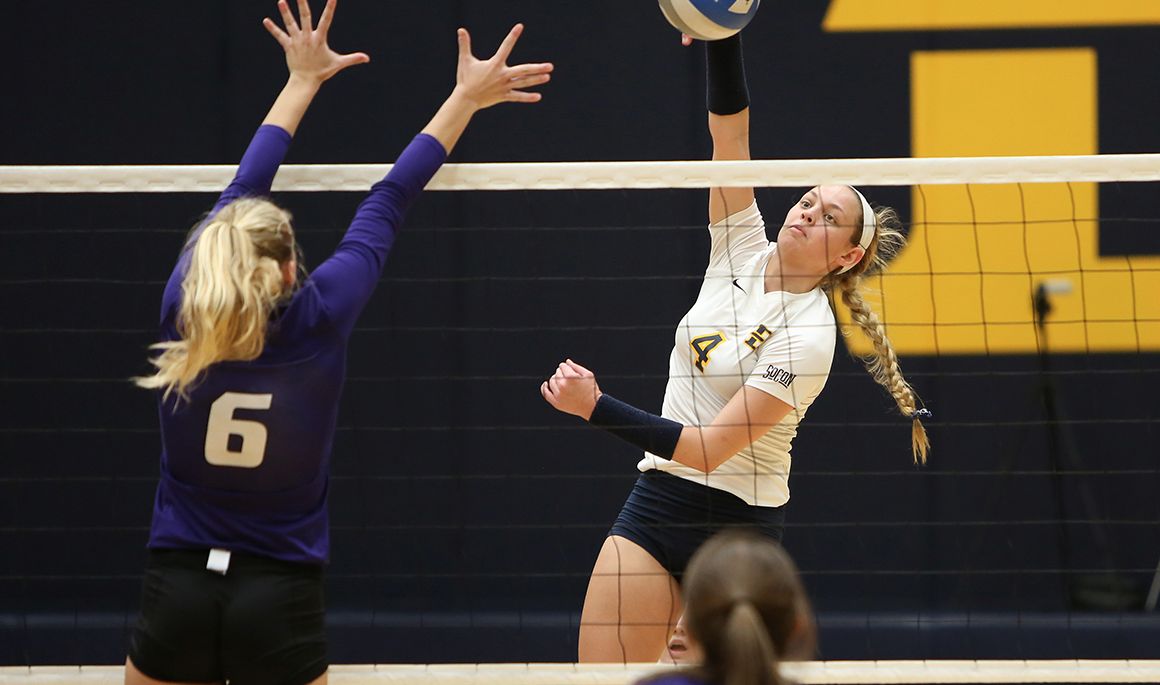 "This loss reveals things going forward that we will focus on but it will also be the catalyst that drives us to reach our team goal that our 13 strong individuals have committed themselves to fulfilling" said head coach Lindsey Devine.

Senior Briana Allmon (Flower Mound, Texas) was the offensive spark for the Bucs as she recorded match-high 21 kills to go along with 14 digs to record her sixth double-double on the year. Allmon also hit a team-high .360 while the next best was sophomore AJ Lux with eight kills and a hitting percentage of .292.

Freshman Kaela Massey for the second straight game as been dominant at the net as she recorded six blocks on the night. Last night against Wofford, Massey tied her career-high with seven blocks. As a team, ETSU out-blocked UNCG, 8-7.

As a team the Bucs hit .180 with 161 kills, 77 digs and two service aces. The loss snapped ETSU’s eight game winning streak and dropped the Bucs overall record to 17-7 and 9-3 in the Southern Conference.

FIRST SET
The Bucs in the first set led wire-to-wire as ETSU dominated the Spartans to take the first set, 25-17. The match got started with an ace from Alyssa Kvarta along with senior Briana Allmon recording back-to-back kills to give a quick 4-0 lead. The Spartans responded and cut the lead to 12-10 before the Buccaneer offense got hot once again scoring five straight points with two kills and a block coming from freshman Kaela Massey. UNCG cut into the ETSU lead near the end scoring six of seven points to give ETSU a slim 21-17 lead. However, the Bucs scored the final five points on two UNCG attack errors to take the first set.

SECOND SET
To begin the set, ETSU raced out to a 2-1 lead before UNCG scored four straight points and never looked back as they led the rest of the way. Ultimately the Spartans jumped out to a 22-13 lead midway through the second before the ETSU offense got going. The Bucs mounted a small comeback late in the set as ETSU scored four straight points with two kills coming from freshman Braedyn Tutton to close the UNCG gap to 22-17. The Spartans scored three of the final four points to tie the match at 1-1.

THIRD SET
In the third set it was a battle between the Bucs and the Spartans as neither team was able to pull away from the other. ETSU and UNCG traded points until midway through when the Spartan defense maintained the ETSU offensive attack and took a 15-10 lead. Towards the end, UNCG scored four of the final five points to take the third set, 25-17.

FOURTH SET
ETSU battled in the fourth set after UNCG jumped out to a 7-4 lead, the Buccaneers recorded three straight points to tie the game at 7-7. For the first time since earlier in the third set the Bucs took the lead as ETSU recorded three straight blocks to take a 10-8 lead. From that point on it was back and forth action as neither team was able to pull away. In the later stages of the set and UNCG leading 23-22, the Spartans scored two of the next three points for the four set victory.