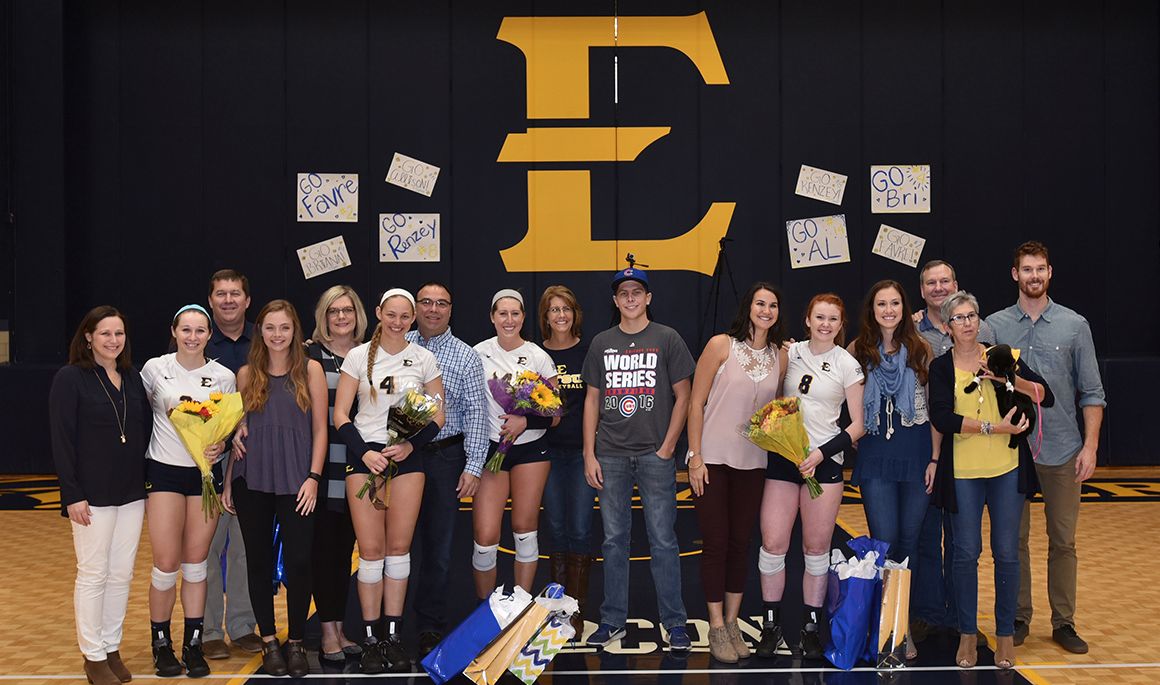 With the win, ETSU remains atop the SoCon standings at 10-3 in league play and 18-7 overall. Meanwhile, Samford drops to 8-5, 17-11. The Bucs have now won 19 straight sets at home and picked up their 14th sweep of the season, which ranks fourth most all-time in a single season. Of the team’s 14 three-set victories, nine have come in Johnson City.

“I think there’s a real snowball effect for us here in Brooks Gym and the momentum just keeps building,” said ETSU head coach Lindsey Devine. “Tonight we were playing for the seniors, their families and our fans. Protecting our home has become important to this team. Our players are trusting the process and really coming together, and it shows in our play.”

For the match, Allmon led the way with a match-high 14 kills, while sophomore Alyssa Kvarta (Crown Point, Ind.) posted a match-high 23 assists. As a team, ETSU also collected nine blocks compared to just four for Samford.

FIRST SET
Using a 6-0 run midway through the set to overtake the Bulldogs’ 6-5 lead, ETSU gained an 11-6 advantage and later went on to score eight of the final nine points to grab the first set, 25-18. Junior Rylee Milhorn (Kingsport) stood out early for ETSU, leading the Bucs with four kills and a .571 hitting percentage, while Kvarta had a set high eight assists. As a team, the Bucs posted a 52 percent attack percentage in the first set.

SECOND SET
In a tightly contested second set, the Bucs scored seven of the final nine points to take the 25-20 win. The key play of the set came with ETSU leading 22-20, when sophomore AJ Lux (Shelbyville, Ind.) and freshman Kaela Massey (Brentwood) combined to block a Samford attack and make it 23-20. The Bucs’ attack percentage was once again impressive at 71 percent, while Allmon led the way with six kills and Kvarta posted another seven assists. Lux and Massey both had two blocks each in the second set.

THIRD SET
The two teams traded points throughout the first half of the third set before ETSU posted three straight points to take a 14-12 lead. The Bucs went on to score eight of nine points to make it 19-13 in favor of the Blue and Gold and they never relinquished the lead. Allmon continued to roll in the third set, posting eight kills and a .533 hitting percentage. Kvarta was solid again with another eight assist, as the Bucs increased their attack percentage for the third straight set at 78 percent.