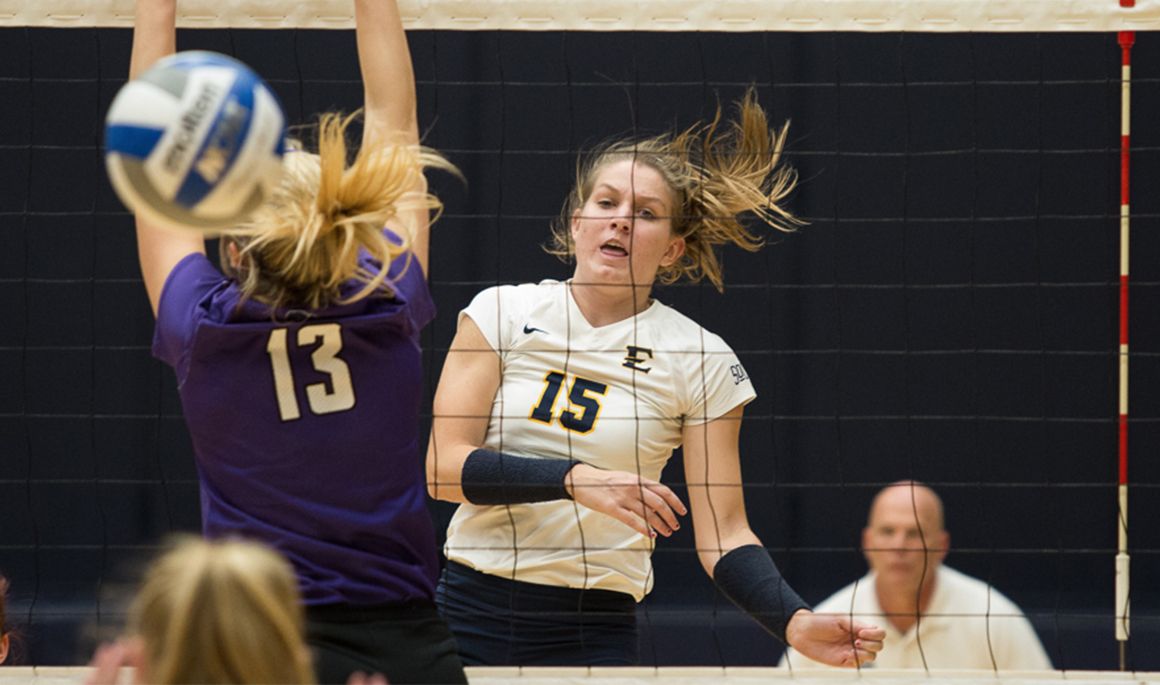 “I am proud for the program,” said head coach Lindsey Devine. “These girls have worked extremely hard all season and we were very determined and had our four senior lead the way in saying that we are going to work hard in protecting our facility.”

Junior outside hitter Rylee Milhorn (Kingsport, Tenn.) recorded a season-high 21 kills on the night with a staggering .429 hitting percentage. Along with 21 kills, Milhorn collected 10 digs, registering her team-leading sixth double-double of the season.

On the offensive attack along with Milhorn was senior Briana Allmon (Flower Mound, Texas) who recorded 14 kills, recording double-digits kills for the 21st time this season. The sophomore duo of AJ Lux (Shelbyville, Ind.) and Mariah McPartland (Boone, Iowa) each had eight kills on the night with McPartland recording a stellar .500 hitting percentage.

As a team, ETSU hit .279 compared to Furman’s .128 hitting percentage. ETSU improves their overall record to 19-7 and 10-3 in conference play to stay atop the Southern Conference standings. Furman drops to 10-17 and 6-9 in SoCon play.

“They are strong young women and have represented this program all year with class,” said Devine. “Our players are relentless and didn’t let the first set deter them in what their mission was tonight which was to be undefeated at home this season.”

First Set
For the first time since October 7, the Buccaneers lost a set in Johnson City, snapping a streak of 19 straight sets won at home as the Paladins took the first set, 28-26. Neither team was able to pull away in the first as the Bucs and the Paladins were deadlocked at 24-24 late in the set. Furman regained the lead after Allmon had an attack that went into the net but a kill by Milhorn quickly knotted the set back up at 25-25. Two points later, Furman executed a perfect block followed by an ETSU attack error led the Paladins to the first set victory.

Second Set
It was a much different story in the second set as the blue and gold made quick work of the Paladins en route to a 25-12 second set victory. Furman tied the game up at 2-2 early in the set before the Bucs rattled off six of the next seven points to take a 7-3 lead. Later in the set, ETSU took control offensively and extended their lead scoring eight straight points, forcing Furman to call a timeout at 23-9. After a kill by Furman’s Annie Bierman, the Kingsport, Tenn., native Milhorn finished off the set with a kill of her own down the left side.

Third Set
Coming out of the break the Bucs continued to roll as ETSU scored nine straight points midway through the set to take a 15-9 lead. The two teams then traded points before the Bucs recorded the final four points of the match to earn the third set victory, 25-17.  The final four points of the match was dominated by freshman Kaela Massey (Brentwood, Tenn.) who had one kill and two blocks.

Fourth Set
The Paladins quickly jumped out to an early lead before once again the Bucs came roaring back scoring seven straight points to give ETSU a 13-9 lead. During the 7-0 run, ETSU capitalized as the Paladins recorded four attack errors. With the Bucs in full control up 21-12 the Paladins made a comeback scoring four straight points near the end to cut into the ETSU lead. However, it was two kills by Milhorn at the end the secured the victory for the Bucs, 25-17.