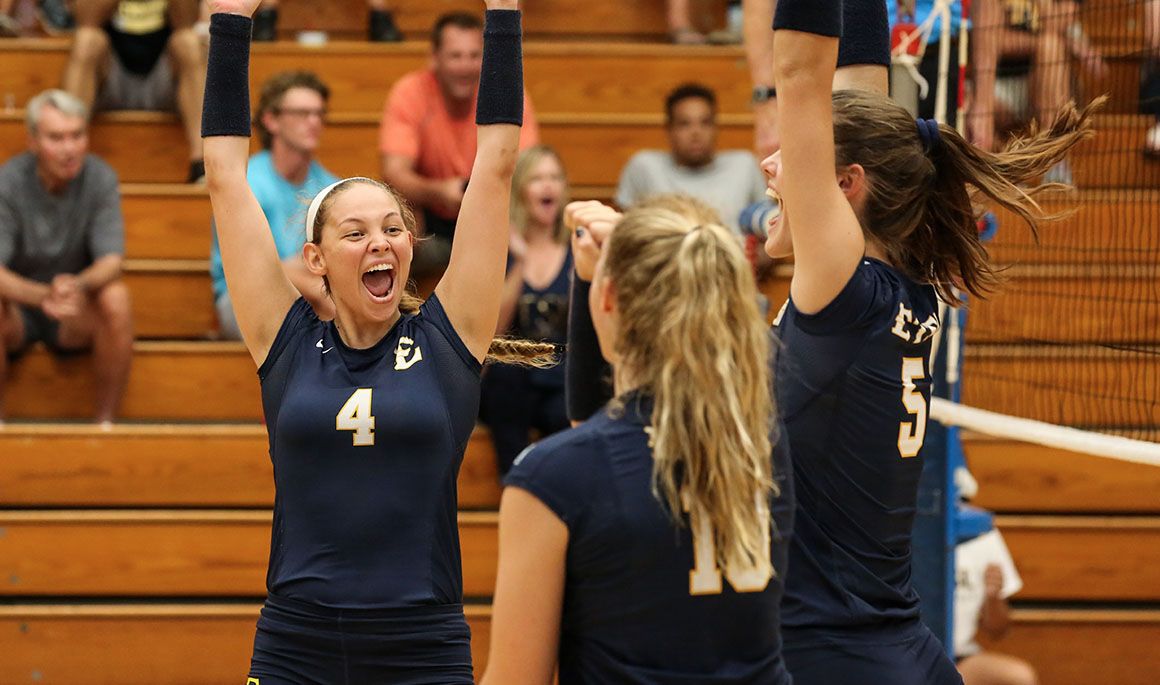 Charleston, S.C.   (November 11, 2016) – The ETSU volleyball team will at least earn a share of the Southern Conference regular season title after sweeping The Citadel (25-17, 25-19, 25-18) on Friday night inside McAlister Fieldhouse.

It is the first time since 1991, the ETSU volleyball program has claimed at least a share of the regular season title as ETSU improves their record to 20-7 and 12-3 in conference play. The Bucs clinched their 16th 20-win season in program history and first since 2013.

Offensively, the blue and gold were led by senior Briana Allmon (Flower Mound, Texas) and sophomore AJ Lux (Shelbyville, Ind.) who each recorded 12 kills on the night. Lux with the team-high 12 kills also had an eye-popping .600 hitting percentage. Allmon recorded her team-leading seventh double-double of the season with 12 kills and 12 digs. Freshman Kaela Massey had another dominant day at the net, recording a total of four blocks.

ETSU will look to clinch an outright SoCon regular season title on Saturday, November 12 in Macon, Ga. against the Mercer Bears.

First Set:
The Bucs and Bulldogs went back and forth in the first set as neither team was able to jump out to a big lead. The Citadel had a 9-8 lead before the Buccaneers rattled off 12 of the next 14 points including an 8-0 run to regain 20-10 lead. The 8-0 was started by sophomore Braedyn Tutton (Courtice, Ontario) who recorded three straight kills midway through the first. The blue and gold recorded the final two points of the set with an attack error by the Bulldogs and a kill by Tutton.

Second Set:
Once again the Bucs and Bulldogs went back and forth to begin the second set before two attack errors by The Citadel and a kill by Allmon propelled the Bucs to a 11-7 lead. ETSU didn’t look as they quickly jumped out to a 19-13 lead. Later in the set, the Bulldogs tried to make a comeback effort scoring three straight points but sophomore outside hitter AJ Lux secured the second set victory with one of her 12 kills on the night.

Third Set:
In the third set, The Citadel jumped out to a 4-0 lead and battled with the Buccaneers through the first 20 points as the Bulldogs grabbed a 12-8 lead. After three straight kills, ETSU was able to tie the game up at 13-13 with kills coming from Mariah McPartland and Kaela Massey. Later in the set coming off a timeout, ETSU rattled off six straight points to take a commanding 22-16 lead. McPartland registered her sixth and final kill of the night to give ETSU their 20th win and 15th sweep of the season.