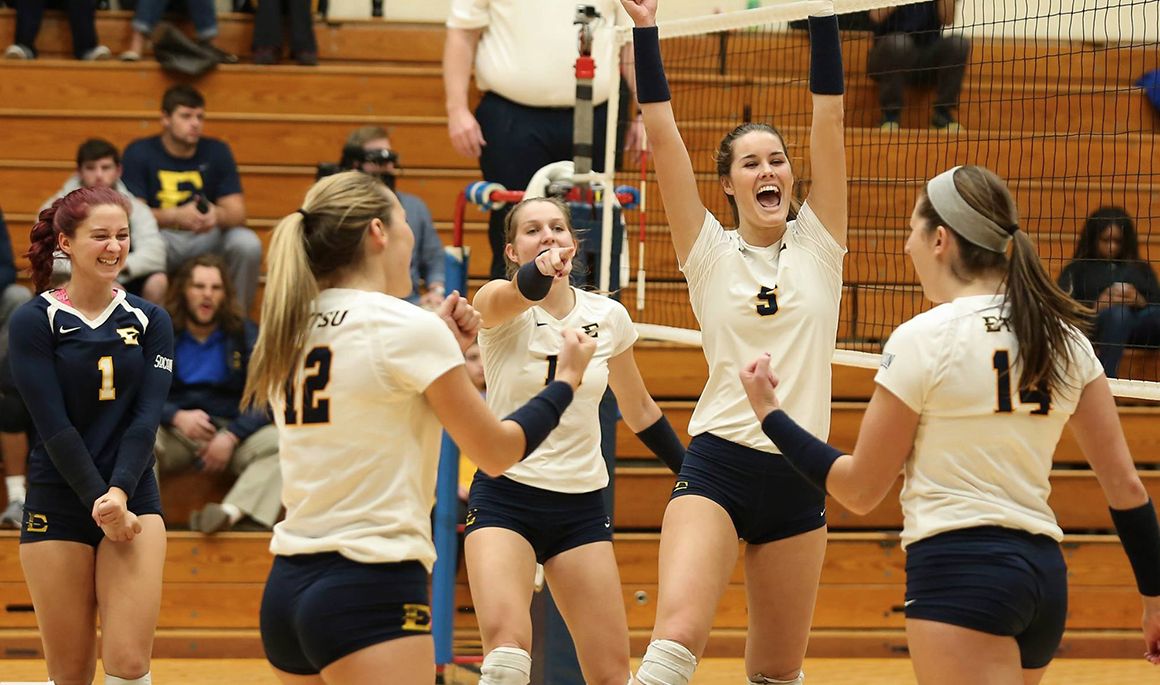 ETSU clinches the No.1 seed in the SoCon Tournament

Its ETSU’s first outright SoCon regular season title since 1991 and the 16th three set victory of the season, third most in program history. With the win the Buccaneers secured in the No.1 seed in the upcoming SoCon tournament and improves its overall record to 21-7 and 13-3 in conference play.

“Tonight’s match was a great demonstration of the training we’ve established throughout the entire season,” said head coach Lindsey Devine. “Mercer pushed back on us but we stayed the course of our identity as a team and did not waiver. We are proud of what we have achieved but also proud of what we have identified to strengthen going into the conference tournament.”

“This team is not only competing at a very high level but is having fun while executing in the high pressure moments,” said Devine. “Our assistant coaches Lauren Baufield and Nikki Dailey have done a phenomenal job all year scouting our opponents which has really built our confidence in trusting the process.”

First Set:
The blue and gold trailed just once in the first set as the Bucs through the first 10 points jumped out to a 7-3 lead. ETSU extended their lead to 11-4 as the Bucs scored seven of the next eight points with a 4-0 run highlighted by a block by McPartland and two kills from freshman Braedyn Tutton (Courtice, Ontario). Mercer was able to cut into the lead late in the set as the Bears scored three straight points before a kill by Massey got the Bucs back on track. Allmon ended any hopes of a Mercer comeback as she rocketed a kill to end the match and give ETSU a 25-17 first-set victory. In the first, ETSU had a staggering .344 hitting percentage.

Second Set:
In the second set the blue and gold never trailed as they took the second set, 25-23. After the Bears tied the set up at 5-5, the Bucs went on a 3-0 run with two of the three points coming off of services aces by Kaela Massey. With ETSU leading 18-14, the Bears were able to hang around scoring three of the next four points to cut into the Buccaneer lead, cutting the score to 20-19. Down the stretch, the Bucs got kills from Tutton, Allmon and Massey to earn the 25-23 second set victory.

Third Set:
It was a battle in the third set as the Bucs and the Bears traded points en route to ETSU holding a slim 13-12 lead through the first 25 points. Out of a Mercer timeout and the Bucs leading 16-12, the Bears responded with four straight points with two kills from Heather Swann to tie the third set. The Bucs were able to respond with four straight kills, two of which came from Tutton to extend their lead late. At the end, it was the two offensive threats for ETSU that put the game away as Massey recorded her sixth and final kill of the night to give the Bucs a 24-22 lead. Milhorn ended the match with a kill to earn ETSU’s first SoCon regular season title since 1991.

What’s Up Next
ETSU secured the No.1 seed in the SoCon Tournament and will begin tournament play on Saturday, Nov.19 at 2:30 p.m. in Birmingham, Ala. The Bucs will play the winner of the No.8/No.9 seed match-up.