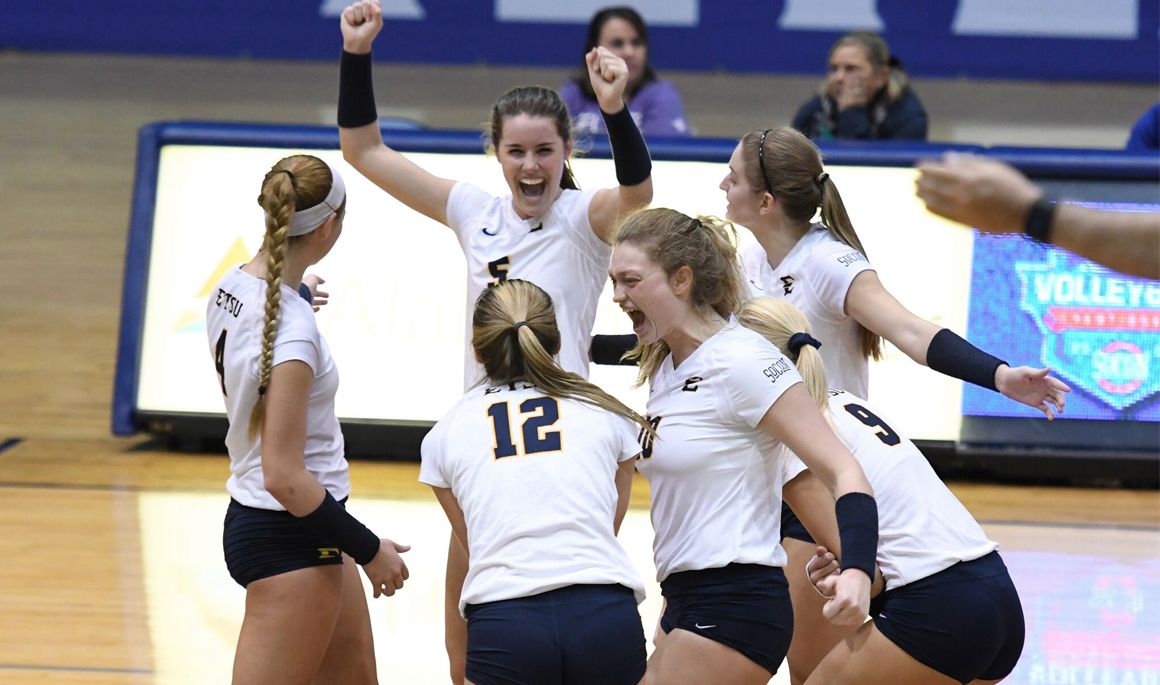 The Buccaneer offense was led by junior Rylee Milhorn (Kingsport, Tenn.) and SoCon Player of the Year Briana Allmon (Flower Mound, Texas) who each recorded a double-double with Milhorn recording 19 kills and 17 digs. Allmon followed up Milhorn’s performance with 15 kills and 14 digs.

First Set:
The Bucs recorded their 22nd first-set victory of the season on Saturday afternoon as ETSU defeated Furman, 25-18 recording a staggering .306 hitting percentage.  The blue and gold never trailed in the first set as they jumped out to a 7-4 lead. Furman was able to score two straight points before the Bucs went on a 6-0 run to lead 14-7 midway through the first set. ETSU extended their lead to 18-7 after sophomore Mariah McPartland (Boone, Iowa) recorded one of her three kills in the first. Furman was able to cut the lead to seven but in the final point junior Rylee Milhorn (Kingsport, Tenn.) blasted her first kill of the day to give ETSU the first-set victory.

Second Set:
Back and forth both teams went in the second set as the teams traded points with ETSU holding a slim 13-12 lead through the first 25 points. After an ETSU timeout, Furman scored four of the next five points to take an 18-16 lead. The Bucs were able to tie the game up at 20-20 as McPartland recorded a kill and forced Furman to call a timeout. Down the stretch the Bucs and Paladins traded points before a block by Furman’s Annie Bierman and service ace by Anna Eckstein resulted in Furman earning the second set victory.

Third Set:
After trailing 3-2 early in the set, ETSU went on a 4-0 run to take a 6-3 lead before later on Furman tied the game up at 9-9. The Bucs turned up the defensive pressure midway through the third set as the Bucs got back to back blocks from freshman Kaela Massey (Brentwood, Tenn.) and Mariah McPartland to give ETSU a 14-10 lead. Ending the set, senior Briana Allmon (Flower Mound, Texas) rocketed a kill to give the Bucs a 24-20 lead. An attack error by Furman gave ETSU the 2-1 lead in the match and 25-21 set victory.

Fourth Set:
Through the first 22 points the Bucs and the Paladins were all tied up at 11-11 before Furman recorded two straight points to take a 13-11 lead. The Paladins extended their lead to 14-12 before the Bucs recorded three straight points, highlighted by back-to-back blocks by sophomore duo AJ Lux (Shelbyville, Ind.) and Braedyn Tutton (Courtice, Ontario). ETSU took the lead 20-17, before Furman rattled off three straight points to once again tie the set up at 20-20. The two teams traded points until Rylee Milhorn took over, scoring the last two points of the fourth to advance the Bucs into the SoCon Tournament semifinals.