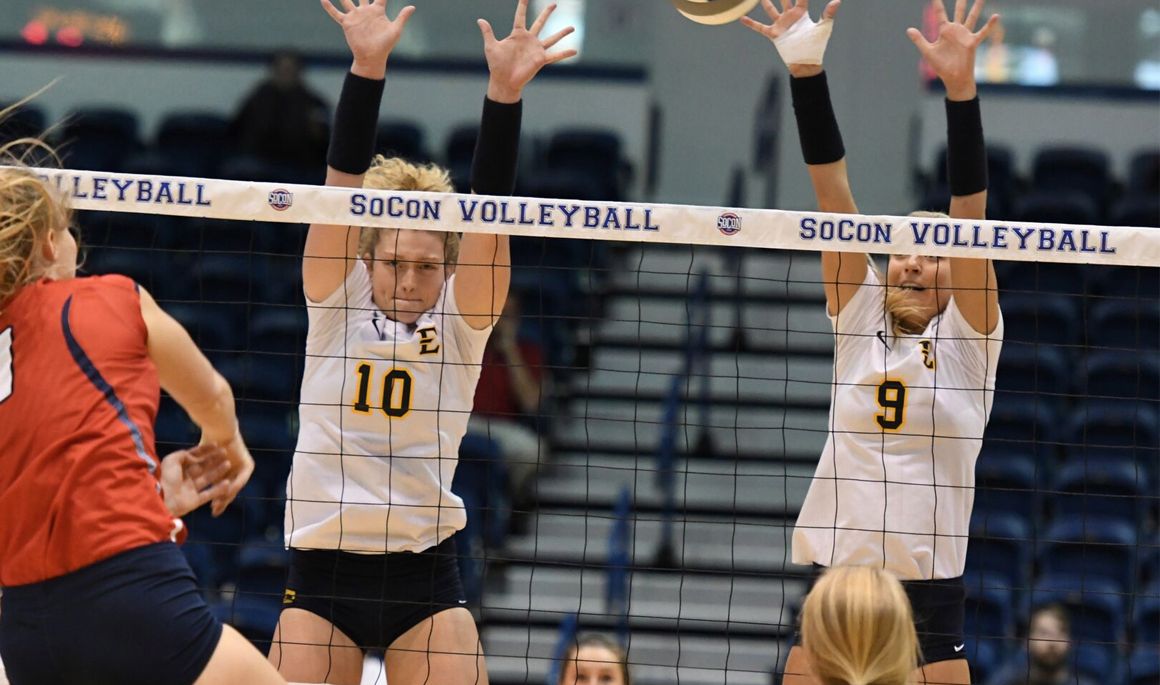 BIRMINGHAM, Ala. (November 20, 2016) –  A record setting 2016 season came to an end for ETSU volleyball on Sunday afternoon as the Buccaneers for just the second time this season was swept by Samford in the Southern Conference Tournament Semifinals.

ETSU earned the No.1 seed after winning the SoCon regular season title for the first time since 1991 and will finish the season with an overall record of 22-8. It’s the fewest amount of losses since having seven back in 2006.

Offensively, the Bucs were led by First Team All-SoCon selection AJ Lux (Shelbyville, Ind.) who recorded nine kills with a .286 hitting percentage. Senior and SoCon Player of the Year Briana Allmon (Flower Mound, Texas) and junior Rylee Milhorn (Kingsport, Tenn.) each recorded eight kills in the match. As a team, the Bucs had a season-low .115 hitting percentage.

First Set:
The first set belonged to the Bulldogs, 25-21 as Samford hit .311 compared to ETSU’s .182. The Bucs were able to earn the first points of the match off of a ball handling error by Samford before the Bulldogs rallied off the next two points to seize the lead. Midway through the set, Samford registered six of eight points to take an 11-6 lead. The lead only grew for Samford despite ETSU trying to make a comeback late in the set. ETSU earned four straight points late in the set thanks in large part to sophomore Braedyn Tutton (Courtice, Ontario) who had two kills and a block during the 4-0 run. With the set at 24-20, Samford’s Erin Bognar recorded a kill to give the Bulldogs a 1-0 match lead.

Second Set:
ETSU never gained the lead in the second set as Samford cruised to a 25-15 set victory. As a unit, Samford registered a .318 hitting percentage compared to ETSU’s .088. After ETSU cut the lead to 7-6 early in the set, the Bulldogs scored seven straight points to take a 13-7 lead. Allmon ended the Samford run with one of her eight kills on the afternoon. As ETSU cut the deficit to 21-15 late in the set, Samford put together four straight points to take second set and 2-0 lead in the match.

Third Set:
The Bucs and Bulldogs battled in the third set as ETSU held on to a slim 13-12 lead through the first 25 points. With the set knotted up at 14-14, the Bulldogs scored six straight points to regain and extend the lead to 20-14. The Bucs got a kill from Braedyn Tutton and a block by Freshman All-SoCon selection Kaela Massey (Brentwood, Tenn.) and sophomore Mariah McPartland (Boone, Iowa) to inch into the Samford lead before the Bulldogs rattled of four straight points to secure the sweep.