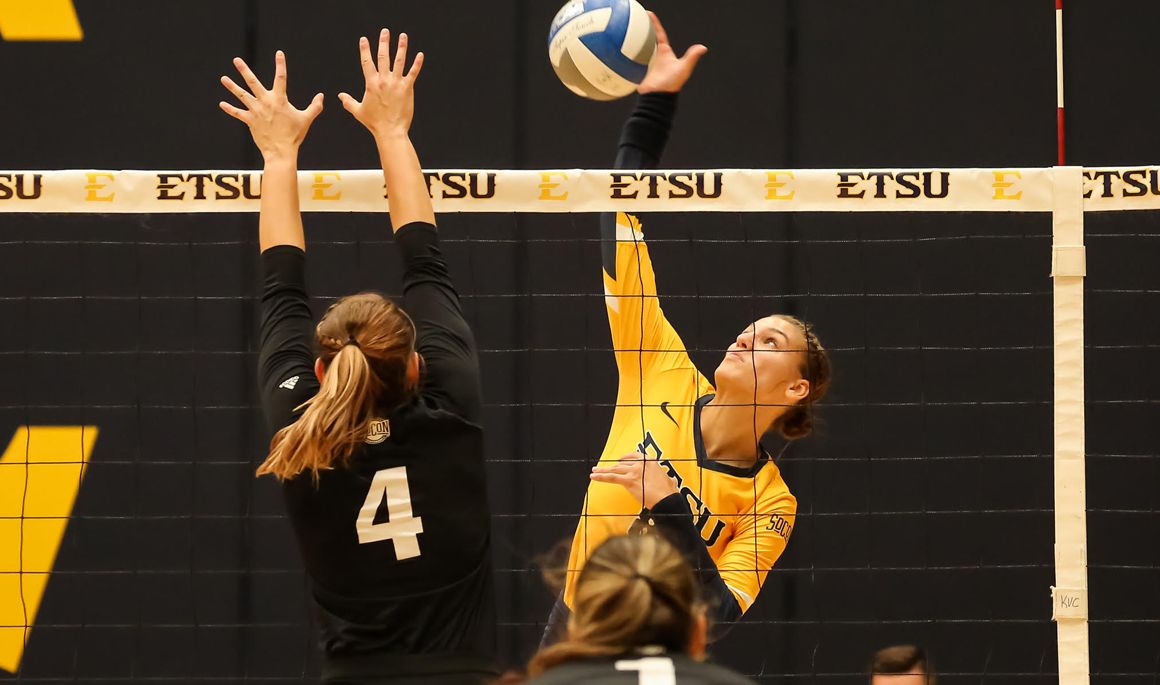 The Bucs will host Samford on Saturday night at 8:00 p.m.

JOHNSON CITY, Tenn. (October 6, 2017) – ETSU cruised past Mercer 3-0 (25-21, 25-13, 25-15) on Friday night inside Brooks Gym. Sophomore Leah Clayton (Danville, Va.) picked up her first double-double of the season finishing with 12 kills and ten digs. As a team, the Bucs out blocked Mercer 7-1 and finished with a .366 hitting percentage. Throughout the night, ETSU only committed five attack errors and produced six service aces.

Marija Popovic (Belgrade, Serbia) had the team-high in digs, with 13. Clayton had the second most-high with ten.

Set 1: Clayton started her night by earning her first kill to begin the set. ETSU trailed Mercer until they tied the set at seven. It was a back and forth battle and a close set until Rylee Milhorn tied the set at 20 with her kill. Marija Popovic and AJ Lux (Shelbyville, Ind.) pitched in points off their service aces. Milhorn secured the first set win with a kill to end the set 25-21.

Set 2: The Bucs took an early 4-0 lead as AJ Lux got things started for the Bucs. Rylee Milhorn then chipped in with three kills in a row. The Bucs continued to stay hot as they had a 10-3 lead and continued to build. It was a true team effort by the Bucs as Kaela Massey, Kalee Vanderhorst and Braedyn Tutton all were giving ETSU a lead off their kills. Vanderhorst and Massey also stopped Mercer two times when they jumped up to block Mercer. Tutton and Clayton also had a block. ETSU was unstoppable as they finished the set 25-13.

Set 3: ETSU continued to move their momentum to the third set as they got a lead early on. Lux once again gave the Bucs the fire they needed by starting the set with a kill. Milhorn and Clayton dominated the front line with their kills throughout the set as Mercer was unable to stop them. Attack errors hurt Mercer as ETSU built their lead. Massey finished the set with two blocks, while Lux, Tutton, and Milhorn each had one. Back to back kills by Leah Clayton ended the set 25-15.

Up Next: ETSU gets right back on the court on Saturday as they host Samford for an 8:00 p.m. start.