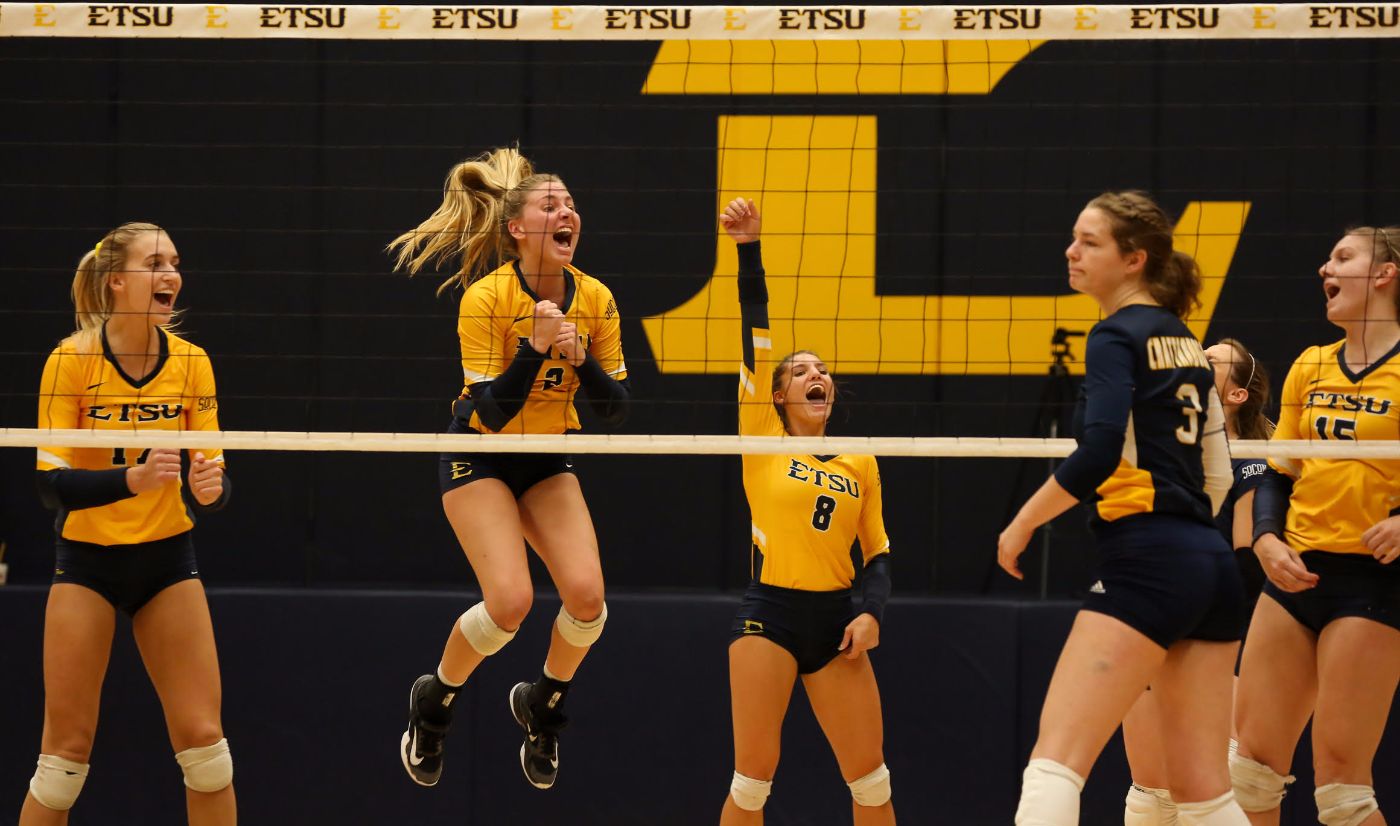 JOHNSON CITY, Tenn. (Nov. 8, 2017) – After an intense five-set battle earlier in the season against Chattanooga, ETSU came out firing to cruise past the Mocs in a three-set win (25-17, 25-18, 25-12) on Wednesday night inside Brooks Gym. Freshman setter Lexie Libs (Floyds Knobs, Ind.) recorded a new career high of 32 assists after tallying double-digit assists in each set. Marija Popovic (Belgrade, Serbia) led the Bucs in digs with 17. Libs, Leah Clayton (Danville, Va.) and Rylee Milhorn (Kingsport, Tenn.) each had seven digs, while Kaela Massey (Brentwood, Tenn.) and Hailey Aguilar (Chicago, Ill.) had four digs. Clayton had the team high of twelve kills and AJ Lux (Shelbyville, Ind.) and Milhorn each had eight. The Bucs as a team had 14 blocks.

Set 1: The Bucs got on top early and built a five-point lead to begin the set. From there, they continued to add points and build a seven-point lead at 18-11. Kills by Leah Clayton and AJ Lux helped ETSU continue to get closer to set point. Chattanooga’s service error put them there, and AJ Lux and Kaela Massey denied the Mocs with a block to secure a 25-17 set win. Massey concluded the first set with a .667 hitting percentage, while Lux finished with a .750 hitting percentage. Clayton had four kills and five digs and Marija Popovic also had five digs. Libs had 11 assists in the first set and chipped in three digs.

Set 2: Libs got things started for the Bucs in the second set going on a 3-0 serve run, with the help of Clayton who slammed the ball over the net for a kill. The Mocs added points and fought back to get within one point of the Bucs at 13-12, but after a timeout, ETSU bounced back with three points in a row to build a lead. Chattanooga continued to fight, but the Bucs were on a roll. Milhorn and Lux gave the Bucs back to back kills for a 25-18 set win. In this set, Milhorn led the Bucs with five kills and a .333 hitting percentage. Braedyn Tutton (Courtice, Ontario) finished with a .667 hitting percentage and added two blocks. Libs continued to set the ball well for the Bucs finishing with another 11 assists. She also gave the Bucs three blocks. Popovic had nine digs.

Set 3: ETSU dominated the entire third set after pulling away early on. Massey went on a 5-0 serve run to put the Bucs ahead. The Mocs stayed within five, before ETSU took a seven-point lead and ran with it. Massey’s serves again helped the Bucs continue to build on their lead. Libs finished the set with three serves in a row coming from a kill by Lux. It was then followed by a kill by Kalee Vanderhorst (Raleigh, N.C.).  Mariah McPartland (Boone, Iowa) denied the Mocs with her block to end the set 25-12. Four Bucs finished with a hitting percentage of .500 and above. Libs concluded the last set with her final ten assists of the game. McPartland gave the Bucs two solo blocks. ETSU as a team finished with six blocks and a .455 hitting percentage.

Up Next: ETSU will conclude the regular season when they host Wofford on Saturday, Nov. 11. They will honor ETSU’s only senior, Rylee Milhorn.