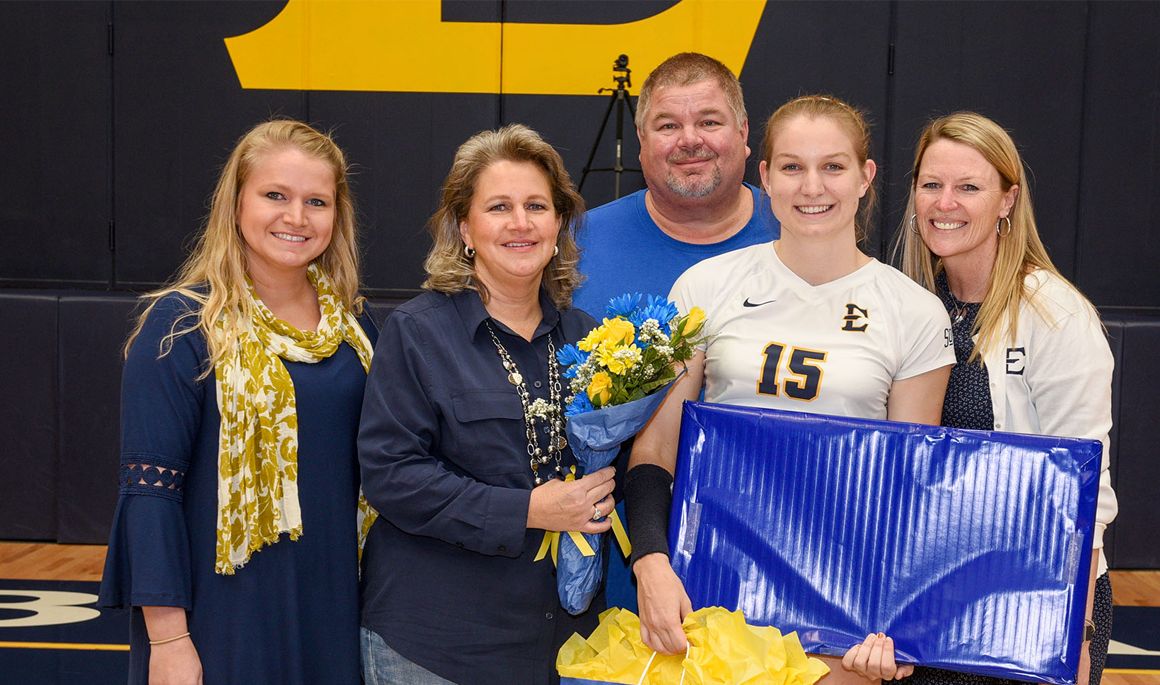 JOHNSON CITY, Tenn. (Nov. 11, 2017) – After celebrating ETSU’s only senior, Rylee Milhorn (Kingsport, Tenn.), the Bucs took the floor for one last time inside Brooks Gym to conclude the regular season. Milhorn finished with six kills, ten digs, and 2 blocks in her final game in Brooks Gym. Despite the 3-0 loss (21-25, 16-25, 23-25), the Bucs will still earn a second place seed in the SoCon Tournament, which is set for next weekend, Nov. 17-19 in Cullowhee, N.C.

Setter Lexie Libs (Floyds, Knobs, Ind.) was just one assist away from matching her career-high of 32. Braedyn Tutton (Courtice, Ontario) finished with a .312 hitting percentage as Mariah McPartland (Boone, Iowa) finished with a .375 hitting percentage. Leah Clayton (Danville, Va.) was just one dig away from a double-double recording 12 kills and nine digs. Hailey Aguilar (Chicago, Ill.) had eight digs and Marija Popovic (Belgrade, Serbia) had 11.

Set 1: Wofford took an 11-5 lead before ETSU’s first timeout. Out of the timeout, ETSU had back-to-back kills by Braedyn Tutton and Leah Clayton, before Wofford extended their lead to 17-9. Following its second timeout, ETSU battled back within two, 18-20, going on a 4-0 run. The teams traded points, but Wofford would ultimately come away with a 25-21 win in the first set. Clayton finished with the team high of five kills in the first set. Popovic had six digs, while Clayton, Milhorn, and Aguilar each had three.

Set 2: Wofford took an early 4-1 lead, but ETSU surged back to go ahead 5-4. Wofford answered with four straight points, forcing an ETSU timeout with the score 8-5. Later in the set, ETSU pulled within four with the score at 20-16, but Wofford would go on a 5-0 run to win the set 25-16. Clayton once again had the team-high of four kills. AJ Lux (Shelbyville, Ind.), Tutton, Milhorn each had two kills in the second set. Milhorn and Popovic each had five digs.

Set 3: Wofford took an early lead, but ETSU had an answer for every Terrier point until Wofford pulled ahead 15-10 forcing ETSU to take a timeout. Coming out of the timeout, Wofford led by as much as 20-13, but ETSU sparked back with three straight points to force a Wofford timeout. The Bucs continued to battle, making the score as close as 23-22, but Wofford earned the sweep with a 25-23 set victory. McPartland had the team high of four kills in the third set, followed by Tutton and Clayton who had three. Aguilar and Clayton each had four digs.

Up Next: The Bucs will head to Cullowhee, N.C. for the SoCon Tournament beginning Friday, Nov. 17.