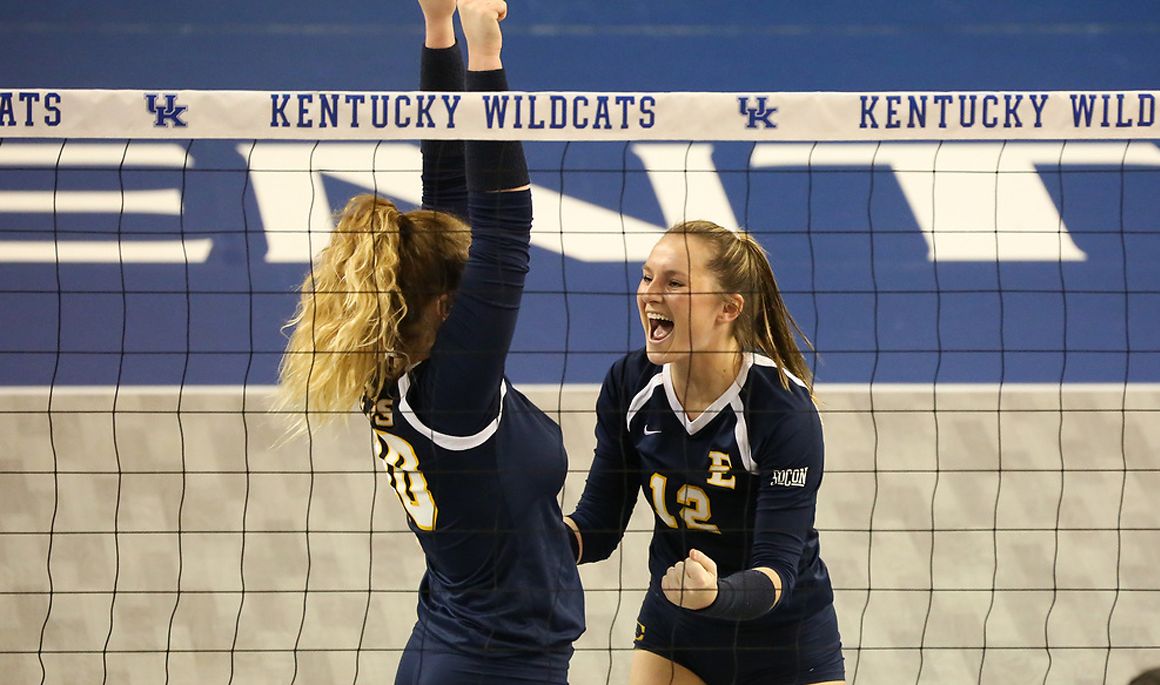 “Overall today was a good day for our team,” said head coach Lindsey Devine. “We executed on some key points that we have been reinforcing the last two weeks. Opening weekends are all about learning and tomorrow will be another opportunity to get better.”

Set 1: Despite the loss in the first set, Leah Clayton tallied six kills, while Alyssa Kvarta finished with 11 assists. Mariah McPartland (Boone, Iowa) gave the Bucs the first kill of the 2018 campaign. Throughout set one, Clemson held a four-point lead, but a 6-0 serve run by Hailey Aguilar (Chicago, Ill.) helped the Bucs get within one. An attack error by ETSU would secure the win for the Tigers.

Set 2: ETSU fired back in the second set to even the match with a 25-16 win. It was a true team effort by the Bucs and multiple 3-0 runs that helped them jump out to such a lead. The Bucs’ senior class controlled the pace of the set and there was nothing that was going to stop them.

Set 3: The Bucs carried their momentum throughout the third set to take the lead. Clemson had the lead throughout most of set three, but Clayton tied the set at 22. Clemson would inch closer to set point, but a 3-0 run by Clayton gave the Bucs the 25-23 win. Clayton once again led the Bucs with eight kills in set three, while AJ Lux (Shelbyville, Ind.) finished with four. ETSU’s defensive efforts were tremendous as Marija Popovic finished with seven digs, Massey finished with five, and both Clayton and Kvarta each had four digs.

Set 4: Heading into set four with an advantage, ETSU continued to shine as a team. Hitting action came from Massey, Clayton, Lux, and Braedyn Tutton (Courtice, Ontario), as Tutton finished the set with a .833 hitting percentage. Kvarta had a set-high of 15 assists.

Set 1: Through 11 ties and 7 lead changes, the Bucs fought to the very end. The entire set was a back and forth battle before South Carolina was able to take their biggest lead of the set after a block to make the score 20-17. A 3-0 run helped the Bucs get within one. Tutton had a solo block and Kvarta had another kill to hold the Gamecocks at set point, but South Carolina would end the set with a kill to win 25-23.

Set 2: Back-to-back kills by Kvarta and Clayton started things off for the Bucs in set two. It was another close set before the Gamecocks were able to take an 18-11 lead after a 7-0 scoring run. Kaela Massey ended their run with a kill, but the Gamecocks were relentless. A block by Lux and McPartland held the Gamecocks at set point, 24-21, but South Carolina would end the set with a block of their own.

Set 3: South Carolina jumped out to a 3-0 lead. ETSU would tie the set at 10 after a 3-0 run. Both teams battled until the Gamecocks took an 18-15 lead. A kill by Kvarta and an attack error by the Gamecocks would tie the set at 19. Service errors and attack errors hurt both teams before South Carolina secured the match with a kill to win the set 25-23.

ETSU will conclude action at the Gamecock Invitational tomorrow (Aug. 25) when they take on Texas A&M Corpus Christi at noon.