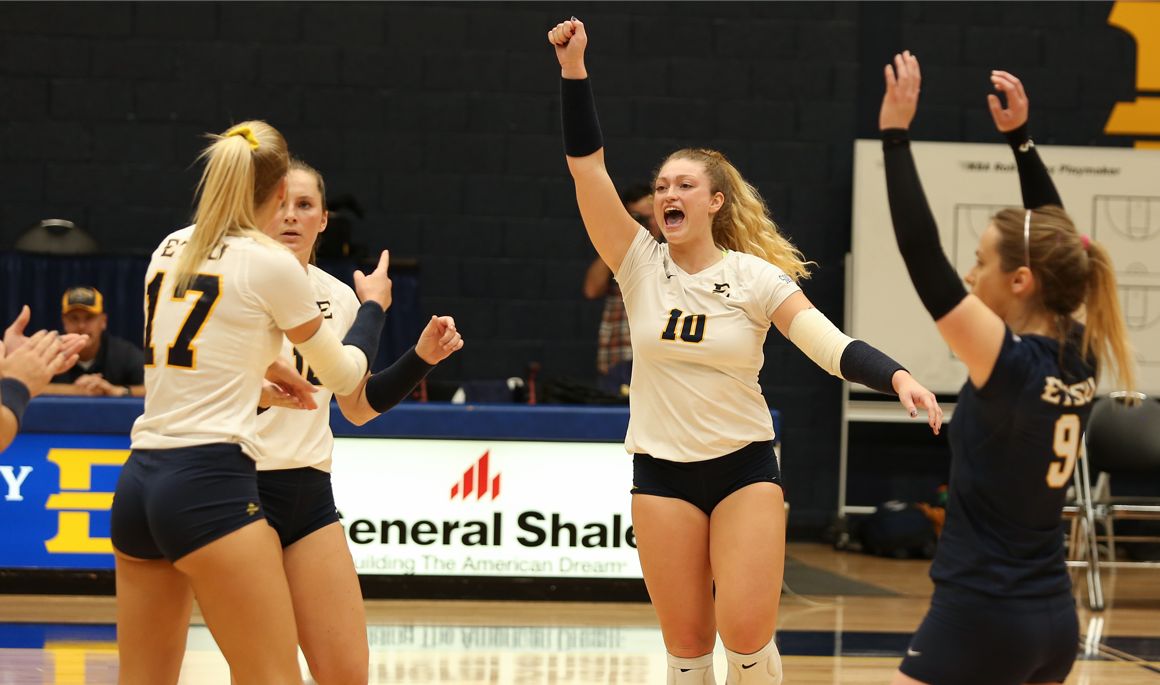 “I was really pleased with how the team followed our game plan today,” shared head coach Lindsey Devine. “We believed that if we passed well we would have some matchups that would work in our favor. Looking at the stats, some great offensive numbers were achieved.”

AJ Lux (Shelbyville, Ind.) led the Bucs with 17 kills finishing with a .625 hitting percentage. Leah Clayton (Danville, Va.) was just as dominant finishing with her first double-double of the season with 16 kills and 11 digs. She also recorded 500 career-digs during today’s match as well.

Set 1: The Islanders struck first in the match, but back-to-back kills by Lux and a kill by Massey gave the Bucs their first lead of the day. From there, the Bucs controlled the set. Hailey Aguilar’s (Chicago, Ill.) serves helped the Bucs grow their lead. A block by McPartland and Clayton gave ETSU a six-point lead at 20-14 causing the Islanders to call timeout. The Islanders fought their way back to 20-24, but Massey would get the kill to end the set 25-21. Freshman Mary Catherine Smith (Murfreesboro, Tenn.) saw action in her first collegiate debut. The rookie recorded two assists. Clayton also went 8-10 finishing with an .800 hitting percentage.

Set 2: Clayton started things off with a kill to put the Bucs ahead. Massey and Aguilar each went on 3-0 runs to keep control of the lead. Popovic then had a 5-0 serve run to give ETSU a 14-9 lead. Lux and Clayton continued to strike for the Bucs forcing the Islanders to use both timeouts. Texas A&M CC fought their way back to make the score 20-24. ETSU then called timeout at set point and Lux came out of the timeout firing a kill to end the set 25-20.

Set 3: The Islanders once again started things off with a kill, but Lux and Braedyn Tutton (Courtice, Ontario) combined for a block to control the set. Both teams battled until Clayton’s 4-0 serve run put the Bucs ahead 13-9, but the Islanders tied it at 14. The rest of the set would be a back and forth battle. Popovic’s 5-0 serve run helped ETSU control a one-point lead. Lux would once again end it with a kill to give the Bucs a 25-23 set and match point win. She went 8-10 to finish with an .800 hitting percentage.

ETSU will return to action next weekend in Nashville, Tenn. They will play in the Bruiser Showcase hosted by Belmont and will take on Tulsa on Aug. 31 to kick off the tournament.