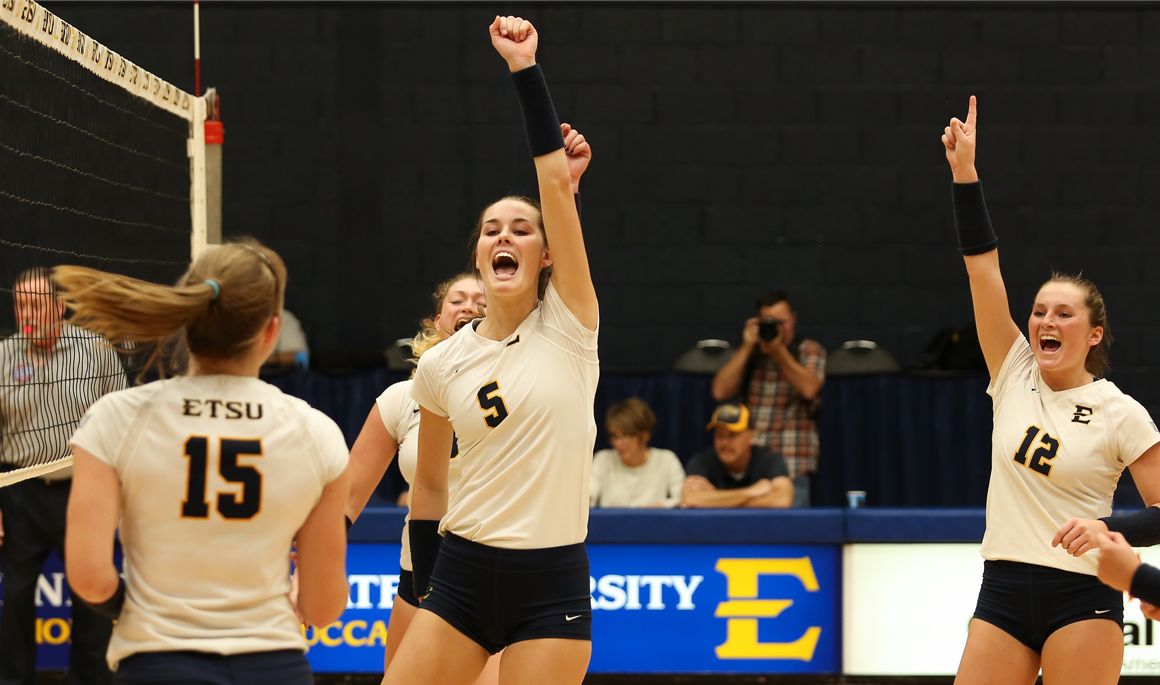 “I’m really pleased with the mental preparation for today’s matches,” said head coach Lindsey Devine. “The team played with such confidence. The hard work shown all week definitely transferred to the team’s success.”

ETSU kicked off the Showcase with a bang after sweeping Tulsa 3-0 on Friday morning. Kaela Massey (Brentwood, Tenn.) had an impressive match, as she finished with eight kills, a .500 hitting percentage, six digs, and a new career-high five aces. Leah Clayton (Danville, Va.) recorded her second double-double of the season leading the Bucs with 14 kills and 11 digs. AJ Lux (Shelbyville, Ind.) had 10 kills, while Alyssa Kvarta (Crown Point, Ind.) finished with 32 assists and eight digs. Marija Popovic (Belgrade, Serbia) also had 20 digs in the win.

Set 1: Tulsa started things off in the first set. ETSU was able to grab their first lead of the set after a Tulsa attacking error to make the score 9-8. Mariah McPartland (Boone, Iowa) helped the Bucs build upon their lead. ETSU’s third 3-0 run of the set came from Marija Popovic’s serves to put the Bucs ahead 15-11. The Bucs continued to build with the help of Clayton’s 5-0 serving run, giving ETSU a 22-15 lead. Tulsa was able to get two points, but AJ Lux ended the set with a kill, as the Bucs would win 25-17.

Set 2: McPartland put the Bucs ahead with a kill to set the tone, as ETSU would control the entire second set. The Bucs held their lead, but Tulsa fought back to get within one. Alyssa Kvarta ended Tulsa’s run with a kill, which led to a 4-0 run to give the Bucs a 20-16 lead. Points went back and forth as Tulsa was able to get within four of the Bucs. ETSU called timeout at set point (24-20). Lux came out of the timeout with an attacking error, but followed that hit with a kill to give the Bucs a 25-21 win in set two.

Set 3: Tulsa came into set three gaining an 8-5 lead causing the Bucs to call timeout. Lux once again came out of a timeout firing a kill. Tulsa was able to get a kill before an 11-1 run sparked the Bucs’ offense to grab an 18-10 lead. During this run, Massey’s three service aces helped ETSU continue their run. Tulsa tried to fight back, but ETSU continued to dominate, pulling away with a 25-13 win.

The Bucs capped off the day with another 3-0 sweep, as Mariah McPartland finished with 11 kills and a .385 hitting percentage. Clayton also recorded double-digit kills with 13 and added seven digs. Kaela Massey had a great defensive game, as she recorded a new career-high 10 digs and also had four blocks.

Set 1: The first set was the closest battle throughout the match, as ETSU came away with a 27-25 win. A 3-0 run helped UMBC gain control of the first set. Tutton’s kill sparked the offense for the Bucs leading to a 6-0 run to give the Bucs their first lead of the match. With a 19-17 lead, UMBC called timeout. The Bucs continued to add to their lead, but UMBC battled back with a 5-0 run to tie the set at 23. Clayton’s kill put the Bucs where they wanted for set point and Lux secured the win with a kill. The defensive efforts of Massey’s nine digs and Popvic’s 10 digs helped the Bucs fight back to win.

Set 2: Once again UMBC jumped out first, but the Bucs never stopped fighting. A UMBC attacking error and three kills by McPartland gave the Bucs a 10-8 lead. From there, ETSU controlled the set and were unstoppable. The Bucs ended the set with a 5-0 run to secure a 25-16 win. Freshman Sara Esposito (Pianiga, Venezia) ended the set with her second collegiate kill of the season.

Set 3: Back and forth runs by both teams started the third set before the Bucs took over and built an 18-11 lead forcing UMBC to call timeout. Serves from Aguilar, Kvarta, and Popovic all helped ETSU’s runs. Kaela Massey went 3-3 in kills, while freshman Alyssa Hatley (Rogersville, Tenn.) picked up her second collegiate kill to set the Bucs up for match point. Seniors Lux and McPartland would end the match with a block.

Up Next: ETSU will conclude the Bruiser Showcase tomorrow (Sept. 1) with a match against Belmont. Live stats and a video stream will be available.