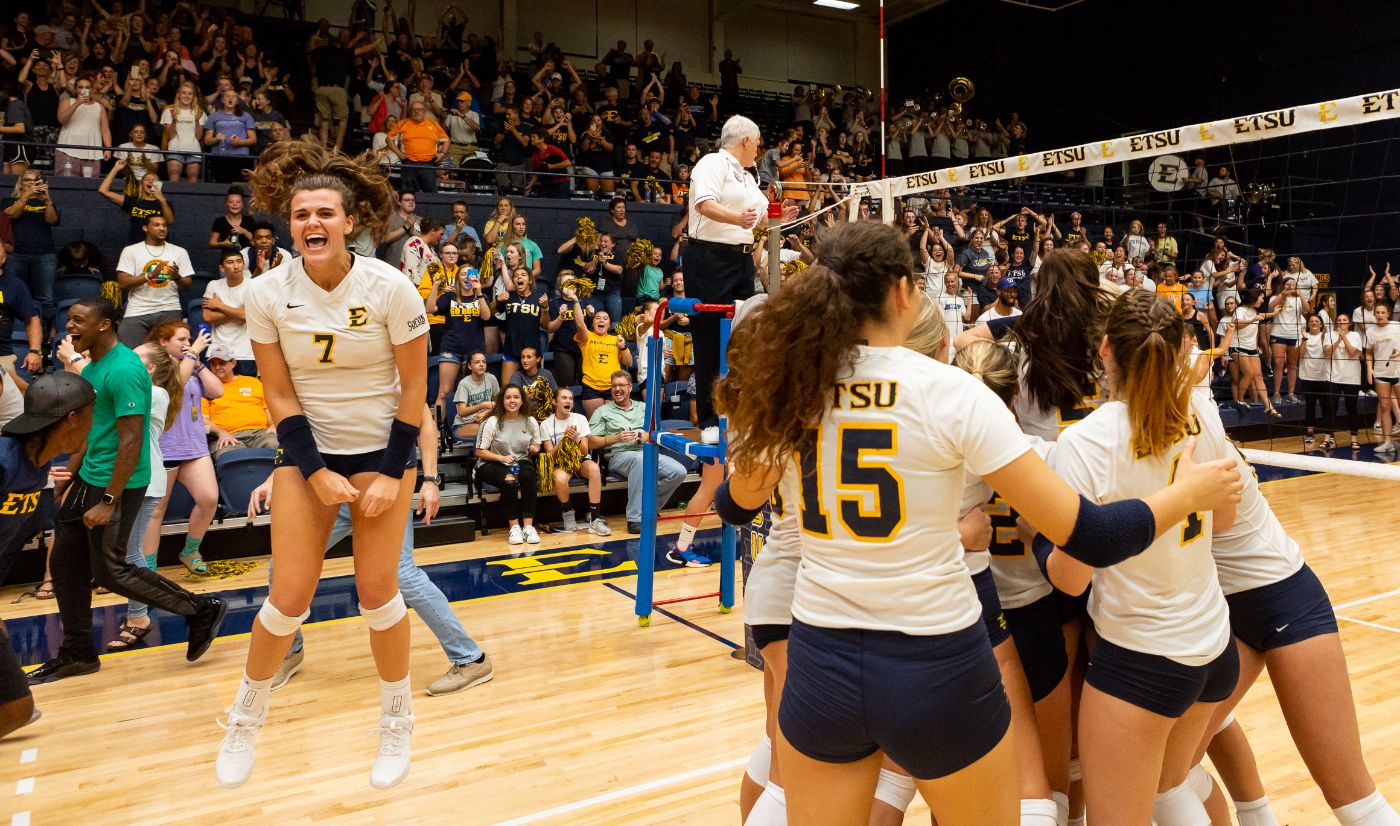 “To be able to get a win in front of a crowd like that, it doesn’t matter who the opponent is,” shared head coach Lindsey Devine. “That crowd was phenomenal. It goes to show that we have the best crowd in the northeast state of Tennessee, so we’re pretty lucky. We were able to execute our game plan and I think that the girls put in a lot of heart. They used their minds when we need to, to really focus. Those are kind of the things we’ve been talking about; follow the game plan, win games with your mind, play hard, and great things are going to come your way.”

Set 1: Tennessee was able to get the first point of the match after recording a block. A 4-0 run by Clayton gave the Bucs a 5-3 lead.  From there, it was a back and forth set, as there were 12 ties. Back-to-back kills by Massey helped the Bucs grab a 13-11 lead, a 3-0 run by the Vols put them out in front. Timeouts went back and forth from ETSU and UT as both teams continued to fight. A block by Kvarta and McPartland tied it at 21, but four straight points by the Vols would give them the 25-21 win. Aguilar and Massey had seven digs each, while Lux led the Bucs with six kills.

Set 2: The Bucs jumped out hungry in set two running away with a 10-5 lead. Serves by Aguilar, Popovic, and Kvarta were tremendous. The Bucs continued to dominate the set forcing UT to call timeout with ETSU out in front 20-12. The Bucs kept piling on the points and AJ Lux would end the set 25-15 with a kill. Massey and Clayton led the Bucs in kills, while Kvarta had her second 11-assist performance of the night.

Set 3: It was once again a tight race in the beginning of the set with five ties that would end at 10-10. The Bucs were able to grab a two-point lead before Tennessee’s Tessa Grubbs went on a 4-0 serve run to put the Vols ahead 16-15. ETSU would continue to trail by one or two points throughout the rest of the set, but a four-point deficit at set point would help the Vols. Tessa Grubbs ended the third set with a kill to give the Vols a 25-20 win to take a 2-1 lead in the match. McPartland led the set with four kills.

Set 4: ETSU was eager to fight back as they quickly began a 4-0 lead through Aguilar’s serves. The Bucs would control the entire set holding a lead. Blocks from McPartland, Massey, and Tutton gave ETSU the points they needed to build upon their lead. With ETSU leading 20-15, UT called timeout, but a 4-0 run by freshman Alyssa Hatley (Rogersville, Tenn.) put the Bucs within set point. A UT service error would end the set, as the Bucs would even the match with a 25-19 set win.

Set 5: The Vols grabbed a 7-0 run to start the fifth set with six straight serves coming from Tennessee’s Brooke Schumacher. Senior leader Kvarta reeled off nine straight serves to give the Bucs a 9-8 lead. Massey and McPartland came up huge for the Bucs denying the Vols of a kill to control their lead. The Vols would tie it at 11, before Massey, Tutton, and Clayton fired three kills in a row to get the Bucs to set point. Tennessee’s Madison Coulter gave her a team a kill to put the score at 14-12, but Leah Clayton would finish it for the Bucs with a kill right down the middle of the court.

Senior setter Alyssa Kvarta on her mindset heading to the service line after UT’s 7-0 lead in the fifth set… “I know going back on the service line when it’s a 7-0 run, it might be a little intimidating, so going back there, taking my time, breathing and relaxing was important. I just wanted to get good on my serve, good hand on the ball.  I kept serving to the same person every time. I wasn’t changing anything and just tried to keep the team calm and composed as much as possible because that’s what got us back up.”

Junior middle blocker Kaela Massey on recording her first career double-double… “We definitely set the standard for the rest of the year. We all came together and played really well. Yeah it was my career-high, but I mean we all did very well. I wouldn’t have been able to do it if we didn’t have a good pass, a good set, middles pulling the block. All the things came together today and it paid off.”

Senior outside hitter AJ Lux on defeating Tennessee her senior year… “Honestly, there’s no words right now. Like coach said, the crowd was unreal. I think that’s what got us fired up the most. Any chance we get to play a big team, an SEC team, any team that we get to play at home, they are going to have a tough match coming in because we’re really good at home. We’re hard to beat at home, but it was a great match for us. We were able to stay calm the entire time, which is something we’ve struggled with. I wanted to take the role of being able to put the ball away, but also be a mental leader. Some of these other girls haven’t been in these positions before and I think that’s what got us the win. We were more experienced. We knew exactly what to do. We had a tough week of practice, but we were able to execute everything we talked about.”

Junior outside hitter Leah Clayton on her last kill of the match to win it for the Bucs… “Really what was going through my mind was to just work on what we practiced all week. Yes, it was the last point, but regardless if I got the last kill or not, we were still going and still going to play hard.”

Up Next: ETSU travels to Durham, N.C. for the Duke Invitational. They will kick off the tournament with Coastal Carolina on Sept. 7 at 10 am.