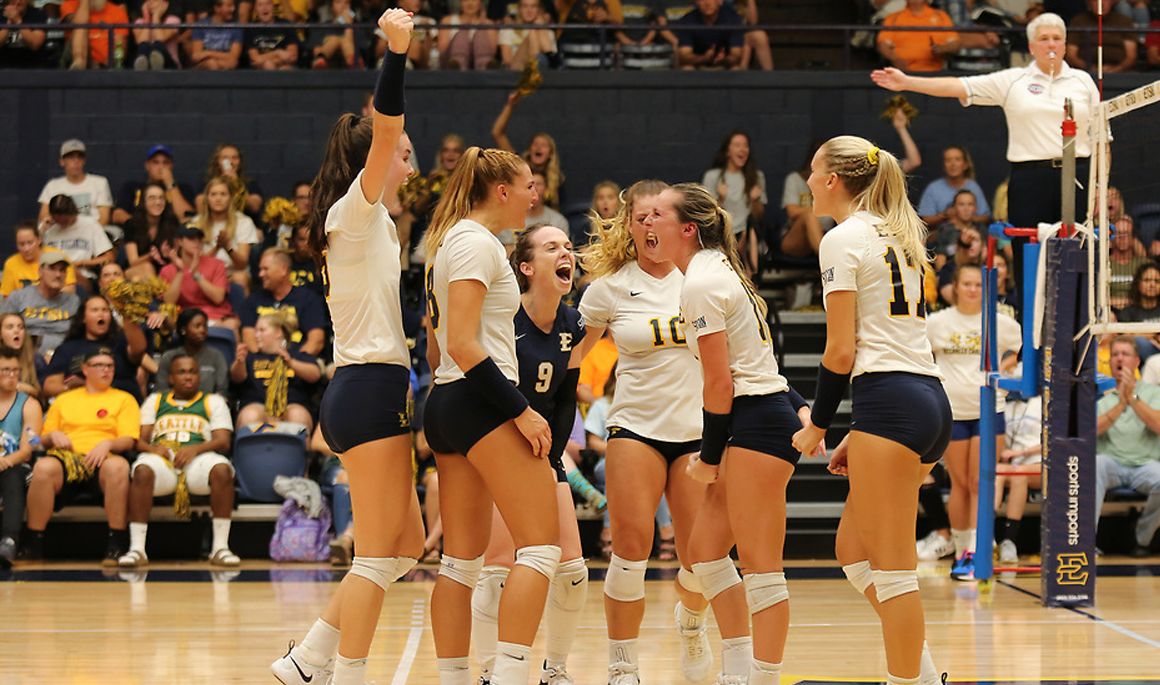 DURHAM, N.C. (Sept. 6, 2018) – After an exciting home opener, the Bucs hit the road for another preseason tournament. They will take on Coastal Carolina, Cincinnati, and Duke throughout the course of two days.

LAST TIME OUT: ETSU hosted Tennessee for their home opener in front of an exciting crowd of 2,016. Alyssa Kvarta’s 9-0 serve run in the fifth set after being down 7-0, propelled the Bucs back to win 15-12.  ETSU’s team effort and determination helped them to a terrific outcome.

ETSU vs. Cincinnati: This will be the third meeting in program history. The last time both teams met was in 1993.

ETSU vs. Duke: This will be the first official meeting. Both teams met in the Spring of 2017 for a scrimmage.

A LOOK AT ETSU: The Bucs are on a roll winning five straight matches, four of which were sweeps. Leah Clayton (Danville, Va.) continues to lead the Bucs in kills with 106. Setter Alyssa Kvarta (Crown Point, Ind.) has been outstanding for the Bucs, quarterbacking the offense and leads the team in double-doubles. Mariah McPartland (Boone, Iowa) and Braedyn Tutton (Courtice, Ontario) are ETSU’s leading blockers. Hailey Aguilar (Chicago, Ill.) and Marija Popovic (Belgrade Serbia) control the Bucs defensively. Kaela Massey (Brentwood, Tenn.) and AJ Lux (Shelbyville, Ind.) were strong contributors in the Bucs’ win over Tennessee and throughout the season.

A LOOK AT COASTAL CAROLINA: Coastal Carolina enters the weekend with a 1-4 record. Anett Nemeth leads Coastal Carolina in kills. Nemeth and Kaylah House are Coastal Carolina’s strongest blockers. Defensively they have multiple players who do well on the back line with digs.

A LOOK AT CINCINNATI: Cincinnati comes into the weekend with a 5-1 overall record. They took down #25 Colorado State, picking up a 3-1 win. Their one loss of the season was against Miami in a five-setter. Jordan Thompson will be one to look out for, as she is ranked nationally with her stats.

A LOOK AT DUKE: Duke is 4-2 on the season with back-to-back losses from #8 BYU. Leah Meyer leads the Blue Devils in kills and blocks. Duke is holding their opponents to a .181 hitting percentage. Mackenzie Cole is their libero, averaging 4.52 digs per set.