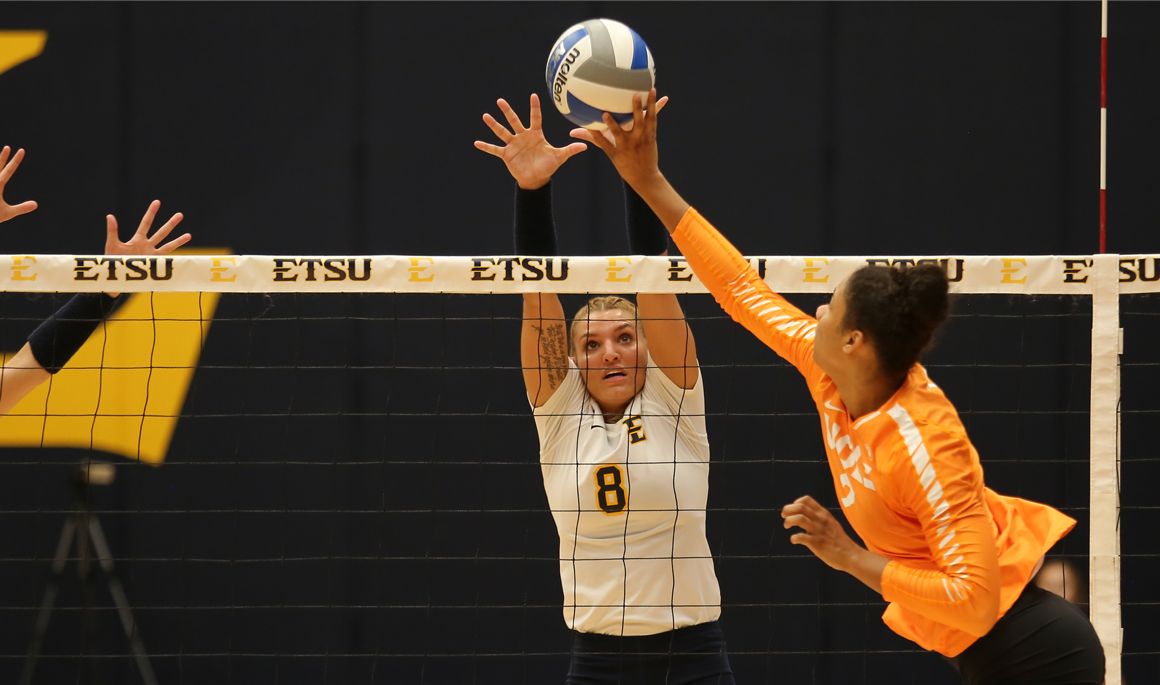 ETSU wins 3-1 over Coastal Carolina, but falls 3-2 to Cincinnati

“Today was a good day for our program,” said head coach Lindsey Devine. “It was another chance for us to learn and grow. We had to show patience, grit, smarts, heart, focus, and confidence throughout both of these matches today. I loved seeing how the team responded to the challenges of playing with intention and consistency. We came up a little short in that fifth set (against Cincinnati) and it stings right now. However, we had to be there in that situation to recognize what we will do differently the next time because there are still a lot of matches ahead of us.”

Set 1: Massey gave the Bucs their first point of the match before Coastal Carolina began to take a lead. A 7-0 run sparked the Chanticleers to give them a 17-8 lead. Mariah McPartland ended their run with a kill, but Coastal Carolina continued to cruise along to build a 10-point lead, 23-13. Kvarta would give the Bucs their last point of the set, but back-to-back points by the Chanticleers gave them the 25-14 win.

Set 2: Serves by Aguilar, Popovic, and Massey helped the Bucs to their success in the second set. It was a tight battle before ETSU went on a 3-0 run to take a 11-8 lead. From there, the Bucs controlled the entire set and continued to build. Kvarta and Tutton came up big for the Bucs with a block, as McPartland and Lux would do the same later in the set. Popovic’s service ace forced Coastal Carolina to call timeout with the score sitting at 20-13. Back-to-back kills by Massey would give the Bucs the 25-17 win in set two.

Set 3: The Bucs started off strong gaining a 9-7 lead after a 6-0 run through Clayton’s serves, but a few 3-0 runs by Coastal Carolina kept them in the set. The Chanticleers would eventually take a three-point lead, but McPartland, Massey, and Lux kept firing kills to tie the set at 22. The last few points of the set would go back and forth, but a kill by Clayton would give ETSU set point and Braedyn Tutton (Courtice, Ontario) ended it with a kill, 28-26.

Set 4: Clayton helped the Bucs gain a 3-0 lead, but Coastal Carolina tied the set at 10. After a service error by Coastal Carolina and a solo block by McPartland, ETSU would build upon their two-point lead. Kvarta and Aguilar gave ETSU 3-0 runs to continue the Bucs’ momentum. A kill by Clayton and back-to-back kills by Lux put ETSU ahead 23-18 and attacking errors by the Chanticleers gave the Bucs the 25-18 win.

Clayton once again led the Bucs in kills with 14 and recorded her fourth double-double adding 13 digs. Massey finished right behind Clayton with 13 kills and eight digs. McPartland and Lux each had 10 kills, while McPartland finished with a .429 hitting percentage. Tutton led the Bucs in blocks with 5, including one solo block and had eight kills. Popovci had 22 digs, while Kvarta tallied 48 assists. This is Kvarta’s third straight match where she has finished with 45 or more assists.

Set 1: Cincinnati jumped out to a 5-0 lead before AJ Lux ended their run with a kill. The Bearcats’ Jordan Thompson added three kills in a row to take a 14-7 lead. Thompson currently leads Division I volleyball in total kills and in kills per set. The Bearcats controlled a seven-point lead throughout the match before taking the set 25-18.

Set 2: In the Bucs’ 28-26 win, there were 11 ties and three lead changes throughout the set. Cincinnati’s Thompson gave her team back-to-back kills before Lux stopped them with a kill of her own. Cincinnati would try to take a lead, but Tutton, Massey, and Lux were relentless. Cincinnati would go up by one, but Lux, Kvarta, and McPartland stopped them in all three attempts. ETSU would grab their first lead of the match after a Bearcat ball handling error, 12-11. Massey pitched in two kills in a row to help the Bucs grab a 16-14 lead. Both teams would fight back and forth until Tutton and Kvarta combined for a block to give ETSU the 28-26 set win.

Set 3: A 6-1 run sparked the Bucs eventually leading to a 13-5 lead to force Cincinnati to call timeout. ETSU dominated the third set after picking up another 4-0 run to grab a 20-9 lead. ETSU quickly got to set point with a 12-point lead. The Bearcats would get three points, but an attacking error would result in the 25-15 win for ETSU.

Set 4: The Bearcats started things off before Kvarta’s two-hand dump gave the Bucs a 7-5 lead. Cincinnati would go on a roll with an 8-0 run to take a 15-6 lead. The Bearcats continued to build to go up 20-9. McPartland and Lux helped the Bucs fight back, but the Bearcats would end it with a kill to win 25-18.

Set 5: Another tight battle occurred in the fifth set, as there were eight ties and three lead changes. Cincinnati took the lead first, but the Bucs fought back to tie the set at 4. Massey and Tutton put the Bucs ahead 6-4 with kills, as the Bearcats would call timeout. Another 3-0 run helped ETSU stay in the lead. The set was tied at points 10, 11, and 12 with both teams going back and forth. The Bearcats had an attack error and Clayton would help the Bucs reach match point after she had an ace, 14-12. Cincinnati called timeout and came out of it with a 4-0 run to win the set 16-14 and to also win the match.

Up Next: ETSU will conclude the Duke Invitational with host Duke tomorrow Sept. 8, at 2:00 pm.