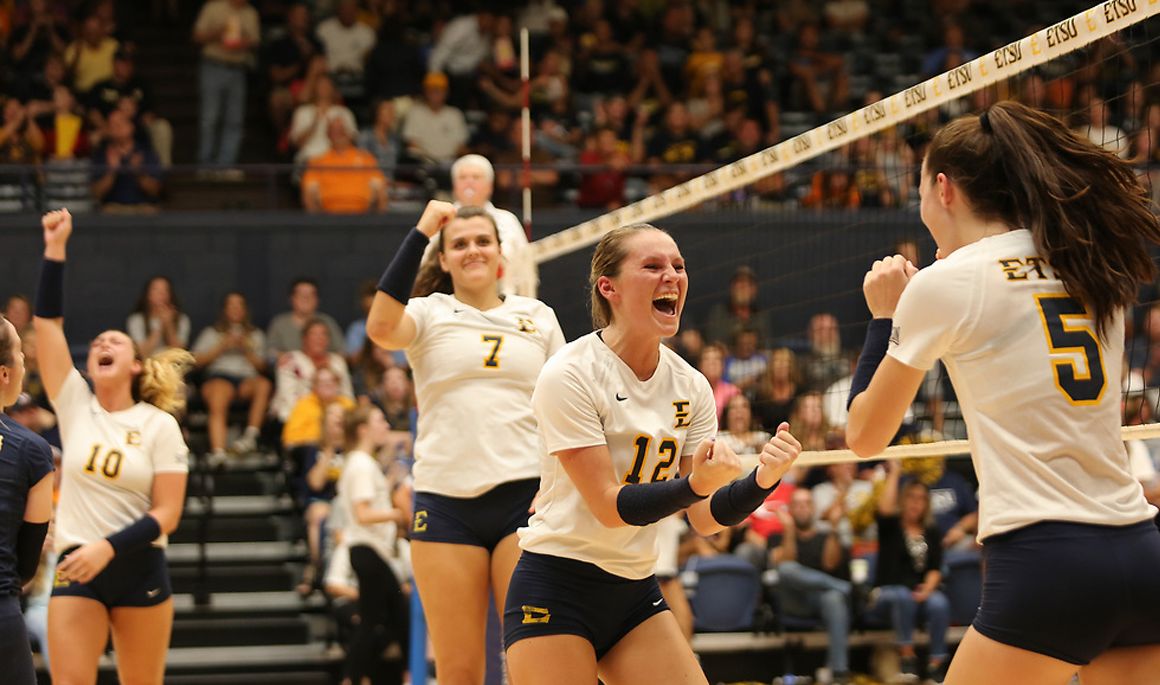 Kvarta finished the weekend with 143 assists, 30 digs, 12 kills, and three blocks throughout three matches. She recorded her fifth double-double of the season and had forty or more assists in each match. This is also Kvarta’s third straight All-Tournament Honor.

Lux had 40 kills, five digs, and three blocks throughout the weekend. She had double-digit kills in all three matches as well.

“I’m so proud of the way the team came to play today, especially after a tough loss last night to Cincinnati,” said head coach Lindsey Devine. “Like she has done all year, Kvarta strategically ran the offense for this win. I asked the team what memory did they want to have about this weekend. The consensus was to have fun, play freely, and just be us. I’m a proud coach to be part of that memory.”

Set 1: Clayton set the tone of the match firing a kill to give ETSU the first point. The Bucs went on a 3-0 run with two kills coming from AJ Lux. McPartland and Clayton helped the Bucs gain a four-point lead and from there ETSU would take control of the entire set. Another kill by Lux put ETSU ahead 20-15 forcing Duke to call timeout. Both teams would fight for points, but Massey ended the set with a kill to give ETSU the 25-20 win in set one.

Set 2: The Bucs jumped out to a 3-0 lead with Kvarta starting things off with a service ace, but Duke had a 3-0 run of their own. The set was tied at 10 before Duke took a two-point lead and would lead the rest of the set. ETSU continued to battle, but Duke was able to reach set point with a block and ended things with a kill, 25-19.

Set 3: Both teams came out to fight in the third set with points going back and forth before the Bucs went on a 5-0 run with five straight serves coming from Kvarta. Massey, Clayton, and McPartland all gave the Bucs the kills they needed to jump out to a 13-8 lead. ETSU could not be stopped, as Kvarta put the Bucs ahead 23-15 with a kill and Popovic ended the set with back-to-back service aces to clinch the 25-15 win.

Set 4: Duke got the first point of the set with a kill, but Braedyn Tutton (Courtice, Ontario) tied it with a kill of her own and came back to deny the Blue Devils with a block. The Bucs went on 5-0 run helping them take a 15-8 lead to force Duke to call timeout. Duke did not give up, as they were able to pull within one of the Bucs and from there the rest of the set was very close. ETSU reached set point after Tutton had a kill to give ETSU a 24-21 lead, but a 4-0 run sparked the Blue Devil’s offense to give them a 25-24 lead. Errors by Duke helped ETSU get to set point and Clayton had a service ace to give the Bucs the 27-25 set and match win.

Up Next: The Bucs return home to host Appalachian State on Tuesday, Sept. 11 at 6:00 PM.