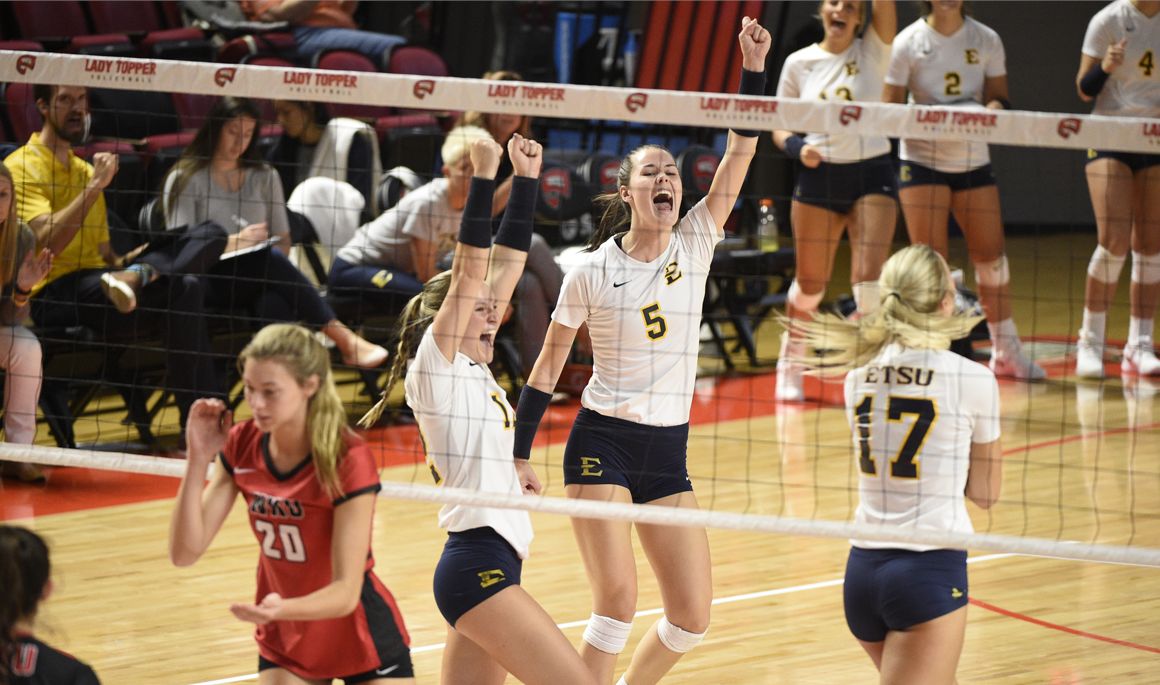 “Success is the result of hard work and learning,” shared head coach Lindsey Devine. “With that being said, I think our team was able to learn something from our morning match, which is the importance of mental preparation and consistent match focus. I was really happy to see how they responded this afternoon. The team played with the needed mindset to earn the win.”

Set 1: The set started off very close between both teams. Tutton gave the Bucs a 7-6 lead after a kill. The Hilltoppers would tie it at seven before holding on to a three-point lead. WKU eventually extended their lead to eight, forcing the Bucs to call timeout with the score sitting at 24-16. Tutton came out of the timeout with a kill and WKU would have an attacking error. Sara Esposito (Pianiga, Venezia) had a service ace to continue the set, but WKU would take the first set 25-19.

Set 2: Alyssa Kvarta helped the Bucs to a 3-0 run to put the Bucs ahead in the second set. Freshman Alyssa Hatley (Rogersville, Tenn.) had a 3-0 serve run as well to keep ETSU ahead and eventually take a four-point lead at 14-10. WKU got right back in the match to tie the set at 15. From there, WKU took the lead, but AJ Lux was not going to give up, as she had three kills in a row to tie the set at 23. A WKU kill and service ace would eventually end the set 25-23.

Set 3: Both teams went on 3-0 runs to keep the game tied before WKU’s Sophia Cerino gave the Hilltoppers their first lead of the set. They went ahead 13-11 before Sara Esposito’s serve run kept the Bucs in the set and Clayton tied it at 13 with an ace. The rest of the set was tied six times with Massey’s kill tying it at 20. WKU got to set point first with an ace and won the match with a kill to get the 25-22 set win.

Clayton recorded her fifth double-double of the season leading the Bucs with 22 kills, just one kill away from tying her career-high, to finish with a .528 hitting percentage and also had 10 digs. Kvarta now leads the Bucs in double-doubles, recording her sixth of the season, as she finished with 47 assists and 10 digs. AJ Lux also recorded double-digit kills finishing with 11. Massey, McPartland, and Tutton also provided an offensive spark for the Bucs and Marija Popovic finished the match with 15 digs.

Set 1: The beginning of the set was close before the Bucs took a three-point lead. ETSU broke open their lead with a 7-0 run with serves coming from Kvarta and Aguilar to go ahead 15-8. The Bucs would hold this lead, as Massey’s kill gave the Bucs set point with a 24-17 lead. NIU got one more kill before the set ended with an NIU attacking error, as ETSU would win the first set 25-18.

Set 2: There were six different ties in the start of the set, but ETSU would eventually take a six-point lead with the score sitting at 18-12. The Bucs built upon their lead, but the Huskies did not give up, as a 6-0 run would tie the set at 23 and eventually put them ahead 24-23. From there both teams would battle to the very end. In their longest set of the year, the Bucs were able to come away with a 34-32 set win as Clayton would end it with a kill.

Set 3: ETSU jumped out first to take the lead and stayed in control of the entire third set. A 7-0 run sparked the Bucs’ offense with kills coming from Kvarta, Lux, and Massey. With an eight-point lead, ETSU continued to dominate and Clayton was unstoppable with her kills putting the Bucs ahead 23-15. Back-to-back errors by NIU would clinch the match for the Bucs 25-15.

Up Next: The Bucs conclude the WKU Tournament with a match vs. No. 22 Washington State.