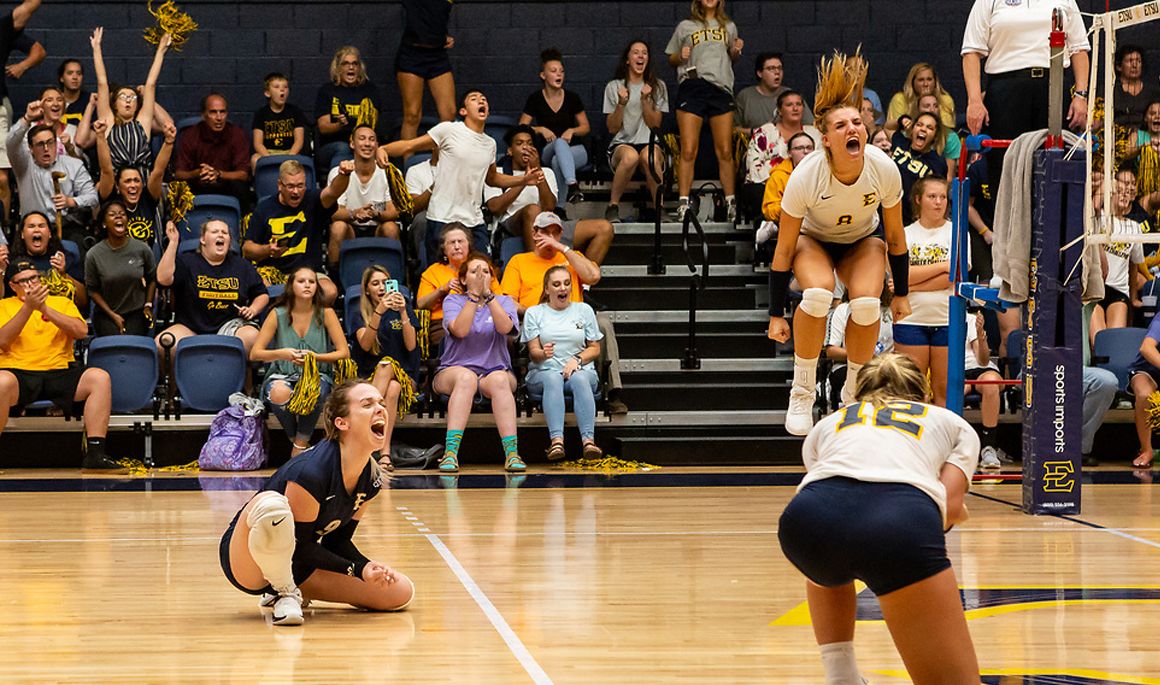 ETSU knocks off No. 22 Cougars for first win over ranked opponent under Devine

“Wow! What a finish to our preseason,” said head coach Lindsey Devine. “I’m so proud of the way the team handled playing against a very tall and talented Washington State team. There were so many moments in this match that players were able to reference from the other games we have played up to this point. In my opinion, that was a huge opportunity for learning and growing. We didn’t shy away from Washington State’s block. We kept attacking over and over. Rather than just talking about our “Why Not” mantra, we played with focus, which propelled us to win.”

Set 1: Leah Clayton set the tone early on for the Bucs giving ETSU the first point of the match and a kill that would be one of many throughout the game. The set was tied four times before the Bucs ran away with a 10-point lead to put the score at 17-7. A 6-0 run sparked the Bucs’ offense with kills coming from Tutton and Clayton. Washington State didn’t give up hope, as they went on a 7-1 run to sit the score at 19-17. With the Bucs still in the lead, they continued to battle. With a 24-21 lead at set point, the Cougars were able to add two more points to sit the score at 24-23, but Clayton came through to end the set with a kill 25-23.

Set 2: Points went back and forth in the beginning of the second set. A Cougar kill by McKenna Woodfin, helped the Cougars take their first lead of the entire match, but it wouldn’t last long before Clayton fired a kill to tie the set at five. Washington State soon after went on a 6-0 run to take a 10-6 lead. Freshman Alyssa Hatley (Rogersville, Tenn.) came in off the bench to end their run with a kill, as the Bucs would trail by three. ETSU continued to battle, but the Cougars controlled their lead and reached set point after a 3-0 run. McPartland gave the Bucs one final kill, but Washington State’s Ella Lajos clinched the 25-17 set win for the Cougars.

Set 4: There were eight ties and four lead changes before the fourth set was going to be decided. Washington State took a 12-10 lead after a 4-0 run fueled their offense. Another run helped them build upon their lead to go ahead 21-15. Clayton ended their run with a kill and Lux and Tutton continued to battle to give ETSU points, but the Cougars would end it 25-18.

Set 5: The Cougars were able to jump out to a 4-1 lead forcing the Bucs to call timeout. Massey came out of the timeout with a kill and back-to-back kills by Clayton tied the set at four. The Cougars fought back, but an ace by Kvarta and an attack error by the Cougars gave the Bucs a 10-7 lead. Washington State pulled within one, but Clayton was relentless. Clayton’s kills helped the Bucs stay in the lead and got the Bucs to set point with her back-to-back kills. The Cougars put the score at 14-13 with a kill, but Kvarta set Tutton up perfectly, who slammed the ball on Cougar territory and the Bucs would clinch the match with a 15-13 set win.

Junior Outside Hitter Leah Clayton: “I feel amazing right now. I think we played awesome. We stuck to the game plan. We really executed and we respected them, but we did not fear them.

Senior Middle Blocker Braedyn Tutton: “I feel great and I know the whole team feels great, but I know we’re not done yet. That’s one game. That’s one win. We have a whole other conference to finish and then we have a tournament to move on to. We’re just going to take it one day at a time and we’ll see what happens.”

On what was going through her mind for the last kill of the game: “I see that server on the back line and Kvarta looks at me and tells me what we’re running. I’m trying to empower my team every chance I get. I see the set go up. I see that seam and there’s no block on me. I swing the ball and it goes down. There wasn’t much going through my mind, but rather my heart. I was thinking more of what’s in for the team and the game.”

Up Next: The Bucs will begin Southern Conference action when they travel to Western Carolina on Wednesday, Sept. 19.