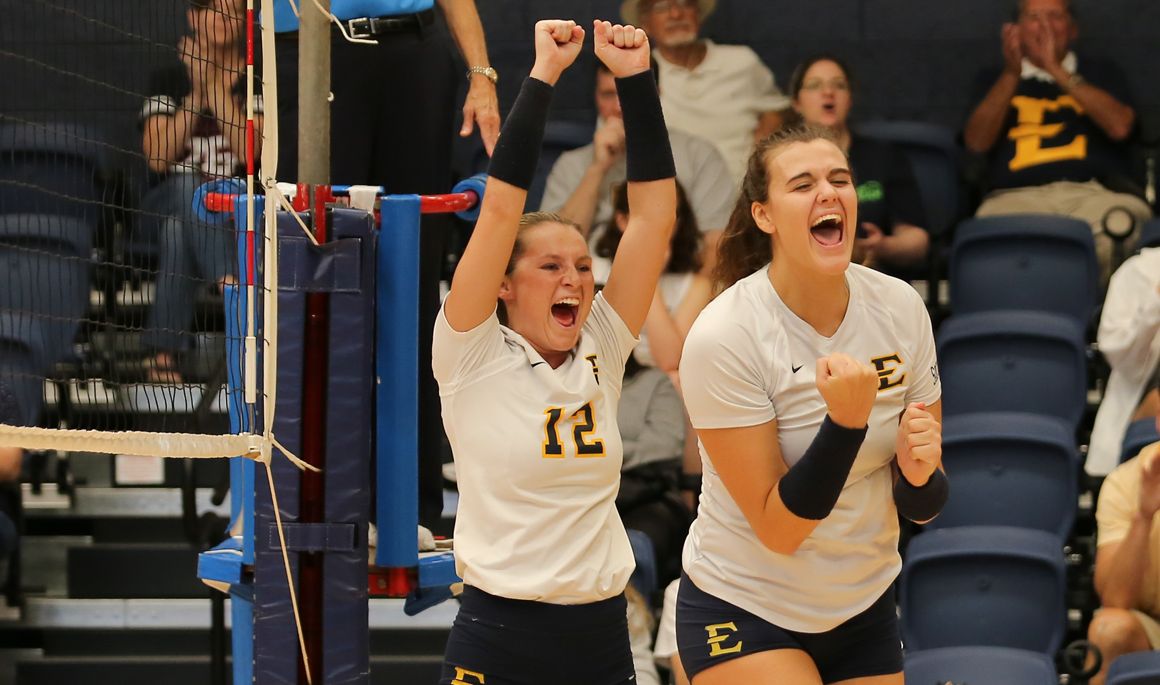 Kvarta tallies her seventh double-double of the season

“Once we settled into playing our style, the team executed many of the key elements that we reinforce daily in our gym,” said head coach Lindsey Devine. “Popche (Marija Popovic) and Hailey’s passing steadily improved which allowed Kvarta to distribute the ball so effectively. She worked hard to get a lot of open looks for our front row. I really was impressed by the way our middles attacked the ball.  They were fast off the ground and found a lot of court to terminate the ball.  I really like the 10 team blocks. AJ, Leah and Kaela did a great job in their block set ups making it easier for our middles to close.”

Set 1: The first set was a battle, as there were 12 ties and lead changes. ETSU was able to grab a 10-9 lead after Massey and McPartland combined for the block. The Bucs’ blocking game continued to thrive throughout the first set. A 4-0 run helped ETSU take a 21-19 lead, but the Spartans would battle back to tie the set at 24 and 25. Back-to-back kills by Massey and Clayton secured the 27-25 set win for the Bucs.

Set 2: McPartland’s 4-0 serve run helped the Bucs take a 4-1 lead early on. From there ETSU would continue to extend their lead. Massey and McPartland put the Bucs up 11-7 to force UNCG to call timeout. Clayton would give ETSU a five-point lead after her kill 15-10 and McPartland later on extended the Bucs lead to 20-14 with a kill of her own. Tutton and McPartland provided kills to set the Bucs up for set point. The Spartans would inch closer after going on a 3-0 run, but ETSU would clinch the second set 25-20.

Set 3: The beginning of the set went back and forth before Popovic helped the Bucs go on 4-0 run to grab a 13-9 lead. ETSU controlled the entire set and dominated offensively. Popovic’s serves once again helped ETSU, as she would end the set with a 5-0 serve run. Back-to-back blocks by McPartland and Kvarta helped the Bucs reach match point and McPartland secured the win with a kill.