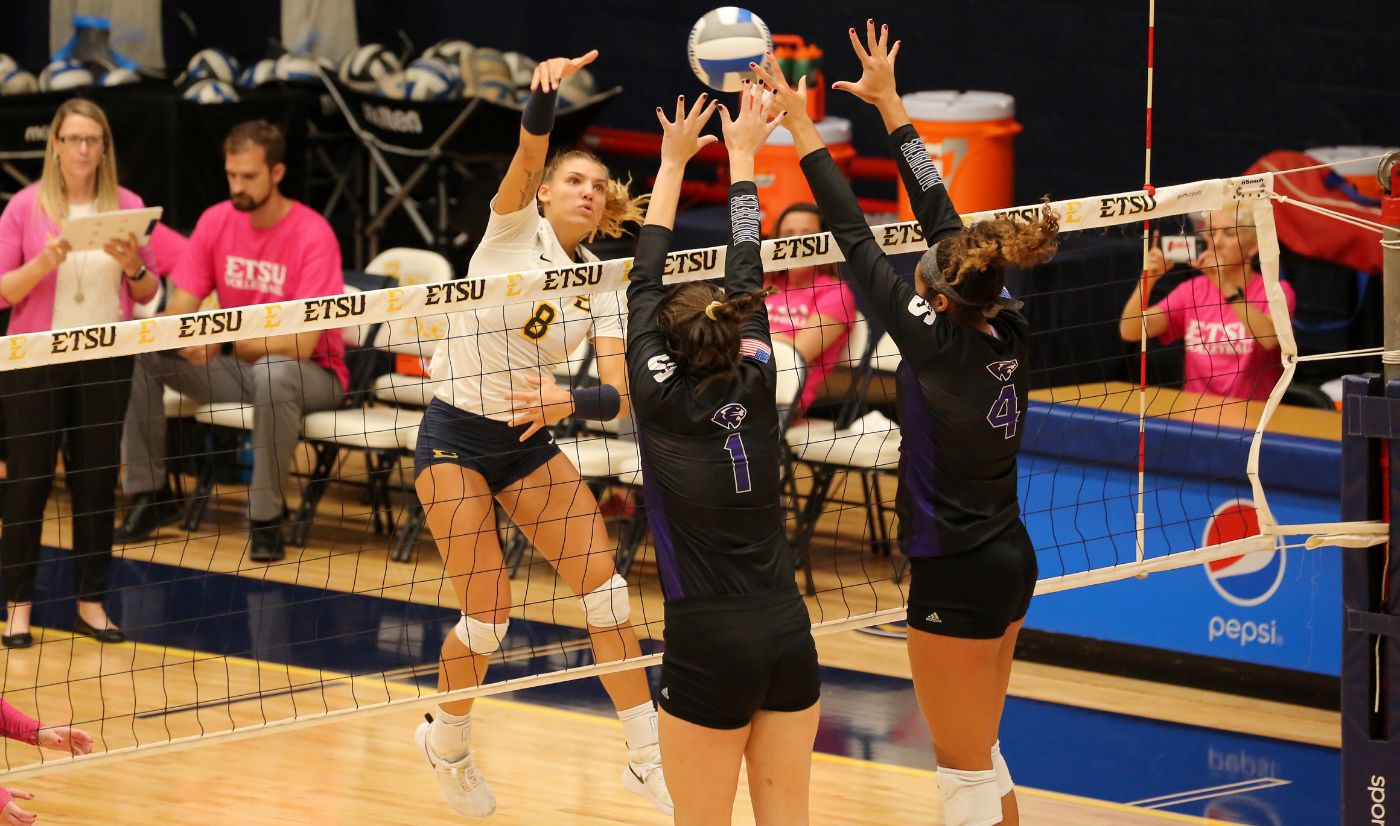 JOHNSON CITY, Tenn. (Oct. 9, 2018) – The ETSU volleyball team (16-5) fell to the High Point Panthers (10-8) on Tuesday evening inside Brooks Gym. The Bucs concluded action against non-conference opponents and finished with an 11-4 record. The remaining portion of their schedule will finish with Southern Conference opponents.

Set 1: There were nine ties and five lead changes in the first set. Both teams battled until High Point’s Molly Livingston gave the Panthers a 16-13 lead after a 6-0 serve run. ETSU fought back, but High Point would extend their lead to 21-16. Tutton helped the Bucs stay in it with her kills, but the Panthers’ blocking was dominant, as they finished the first set with six blocks. Adeline Ellis’ kill clinched the 25-18 set win for the Panthers.

Set 2: Clayton started the Bucs off with a kill and from there ETSU would grow their lead. Hailey Aguilar’s 4-0 serve run helped the Bus grab a 12-7 lead. High Point continued to battle and back-to-back attack errors by ETSU tied the set at 15. The Panthers were able to take a 21-18 lead forcing the Bucs to call timeout. McPartland kept slamming kills, but attacking errors by ETSU gave High Point the 25-21 win.

Set 3: High Point took the lead in the third set, but kills by Kaela Massey (Brentwood, Tenn.) and Tutton helped ETSU to pull within one. McPartland tied the set at 11 with her service ace. High Point tried to maintain their lead, but Tutton and Kvarta’s block tied the set once again at 14. An 11-2 run by the Bucs would secure the 25-17 set win for ETSU in the third. McPartland, Popovic, Kvarta, and Hailey all provided great serve runs for the Bucs.

Set 4: ETSU would control the entire fourth set jumping out to a five-point lead early on. McPartland once again sparked the Bucs with a 5-0 serve run to help ETSU take a 17-8 lead. The Panthers fought back, but the Bucs continued to hold their lead. McPartland had six kills and ended the set with back-to-back kills to give ETSU the 25-18 set win.

Set 5: Set five was the biggest battle of them all, as there were 14 ties and six lead changes. It was a see-saw battle until Kvarta’s 3-0 serve run helped ETSU tie the set at 11. A kill by Jordan Hefner put the Panthers ahead 13-12, but McPartland and Massey tied it at 13 with a block. High Point reached set point, but Clayton’s kill stopped the Panthers with the set tied at 14. The Panthers would reach set point again, but Clayton and Tutton’s block had the set tied at 15. High Point would eventually pull away with the 17-15 set win after recording back-to-back kills.