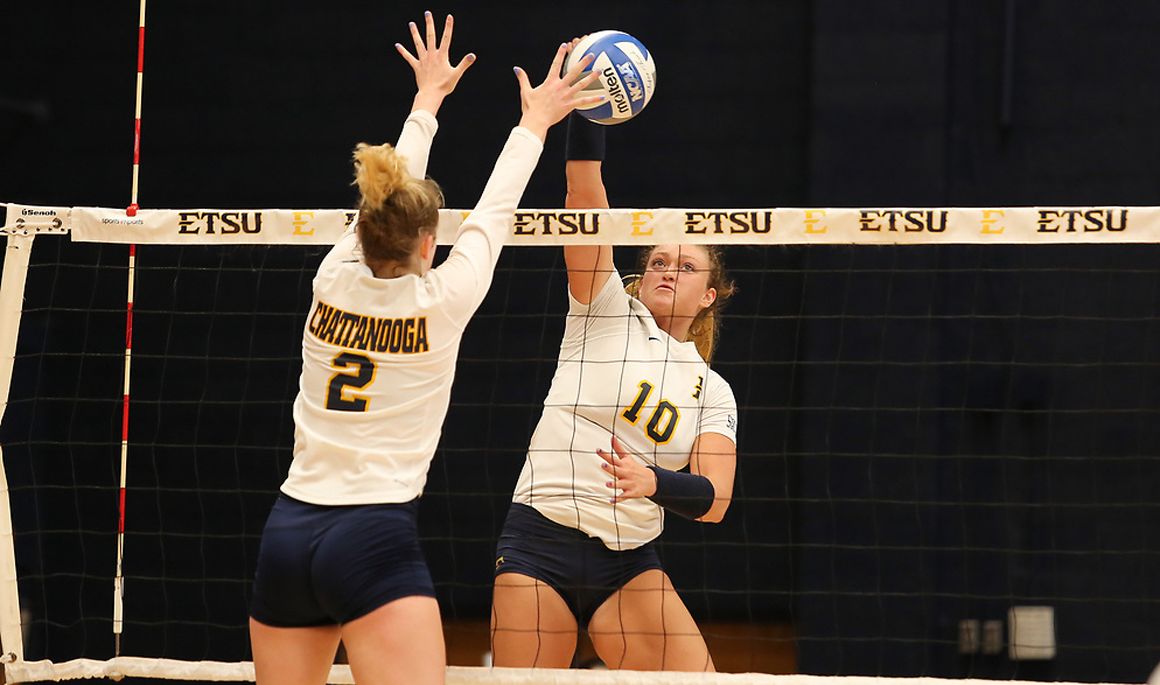 "At the beginning of the match we talked about opportunities," said Coach Devine. "I wanted the team to understand that this was another opportunity to find something small to improve upon. Overall I believe that each player responded and took ownership to focus on the little details which inherently added up to the positive outcome to this match."

Set 1: The Citadel was able to start off strong and gained a 13-8 lead. ETSU would call timeout at 15-9 and the Bucs would come out of the timeout firing. Tutton started an 11-3 run that would help the Bucs climb back into the set. Kvarta had a 5-0 run including an ace that put the Bucs within one and AJ Lux tied the set at 17 with a kill. Aguilar then had a 5-0 run as well with kills from Lux, McPartland, and Massey. Massey and McPartland’s block put the Bucs out front 22-17. Freshman Hatley gave the Bucs set point and a Bulldog error would clinch the set 25-19 for ETSU.

Set 2: Lux started the set off with a kill and serves by Kvarta and Aguilar would help ETSU build a 7-2 lead. ETSU would control their lead throughout the remainder of the set. Lux led the Bucs with five kills in the second set, while Tutton had three. The Bulldogs were able to pull within one, but ETSU continued to stay in control. Popovic’s 3-0 serve run put the Bucs ahead 21-19 and Clayton would secure the win with a kill 25-21.

Set 3: Kvarta gave the Bucs a 2-0 lead and the Bucs would control a two-point lead after Lux fired a kill. Massey put ETSU ahead 14-10 with a kill and errors by The Citadel helped the Bucs control their lead. Once again Kvarta’s serves put the Bucs ahead 21-14 with kills coming from Lux. Back-to-back kills by McPartland and Clayton and an attack error by The Citadel would set the Bucs up for match point. Clayton ended the match with a kill and the Bucs would win set three 25-19.

Up Next: ETSU returns home for a mid-week matchup against Western Carolina on Oct. 17 at 6:00 p.m.