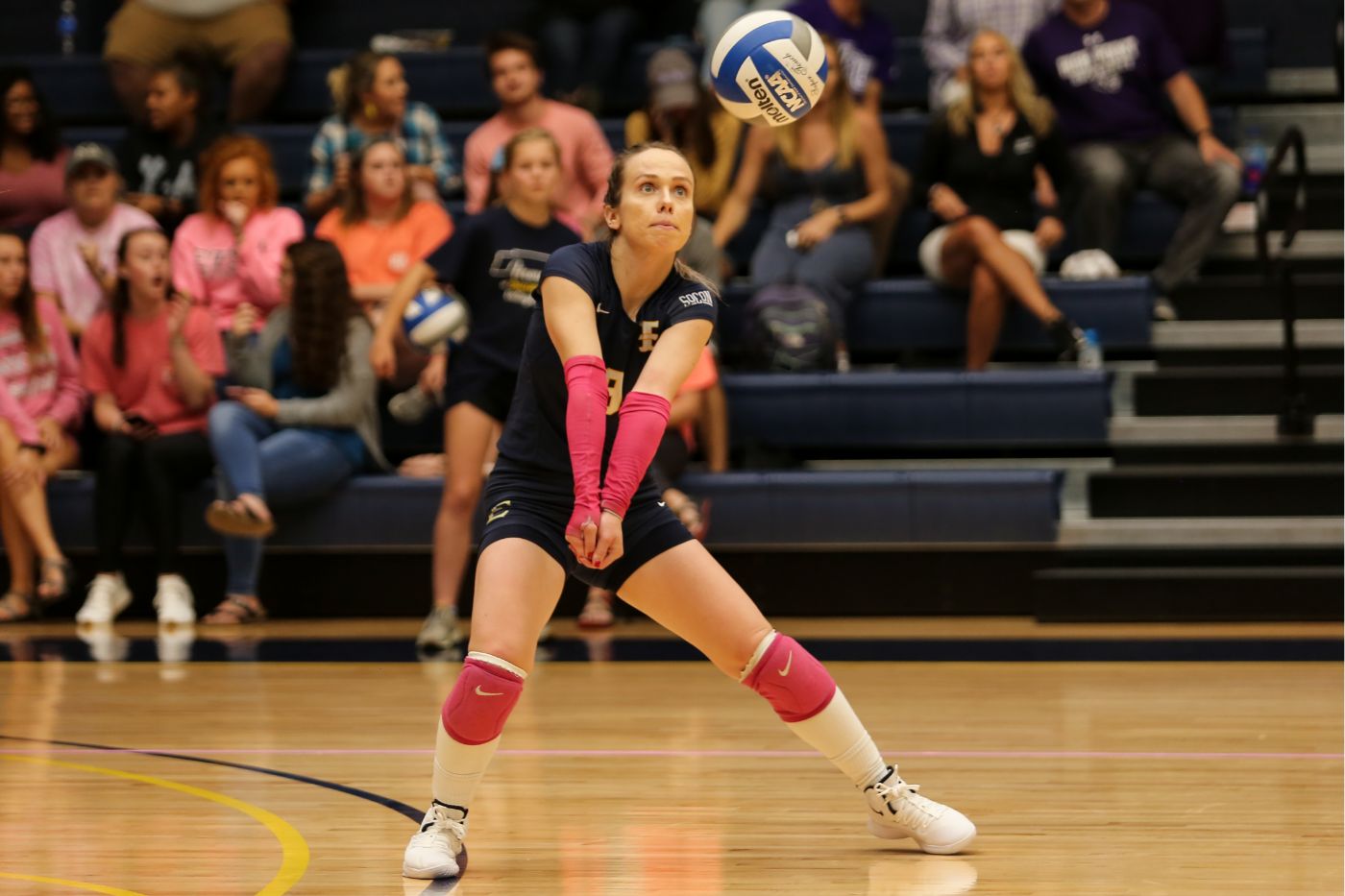 BIRMINGHAM, Ala. (Oct. 27, 2018) – After being down two sets to none, the ETSU volleyball team (21-5, 10-1, SoCon) made one of their biggest comebacks of the year to defeat Samford (13-13, 8-4 SoCon) in five sets inside the Peta Hanna Center on Saturday night. This marks Samford’s first conference loss on their home court and both teams are 1-1 against each other during the regular season.

“Coming back from a 0-2 deficit we really needed to get our heads right and battle,” head coach Lindsey Devine said. “I was really proud of how this team responded to figuring out how to win. We shifted our focus on the service line, along with our blocking game which helped us to build momentum. Combine that with the relentless defense from our libero, who reached 1,000 digs today. Again Kvarta was a key player this match and was able to keep our offense going with her consistency. Kaela proved to be a threat in the front court as well as the back court this weekend, reaching double-digit digs in back-to-back matches. But in the end, we put our hearts out there and played ETSU tough.”

Set 1: With two of the most talented teams in the SoCon, the beginning of set one was a back and forth battle, as there were four ties early on. Tutton’s kill tied the set at ten before Samford would control a two-point lead for the remainder of the set. The Bulldogs eventually led 21-17 forcing the Bucs to call timeout. AJ Lux came out of the timeout with a kill, but Samford would reach set point at 24-18. Senior McPartland would not give up as she slammed down two kills in a row to put the Bucs at 20. The Bulldogs’ Shayla Phillip would secure the set one win 25-20.

Set 2: The battle continued with 11 ties and six lead changes. Once again the set went back and forth early on before either team was able to grab more than a one-point lead. ETSU faced three attacking errors in a row to give Samford a 13-10 lead and would eventually build it to 17-14. Back-to-back blocks by McPartland and Clayton tied the set at 17 and Clayton’s kill would put ETSU out in front 18-17. The Bulldogs were relentless, taking their lead back to 22-19. Massey would fire a kill to help the Bucs pull within two, but it wouldn’t be enough as Samford’s back-to-back kills would clinch set two 25-21.

Set 3: Facing their first two-set deficit throughout conference play, ETSU fought back to take set three. The Bucs’ blocking game tied the set at nine and back-to-back kills by Clayton and Lux put ETSU ahead 12-10. ETSU would hold a one-point lead, as the Bulldogs tried to end the match in three sets. Clayton once again came through for the Bucs with a 19-17 lead. Lux would fire a kill and then combine with McPartland for the block to put ETSU ahead 21-18.  Massey’s kill helped the Bucs reach set point and an attacking error by the Bulldogs would give the Bucs a 25-21 win.

Set 4: There were ten ties and eight different lead changes in another 25-21 set win in the fourth set. Lux became unstoppable slamming down two kills in a row to put the Bucs ahead 10-9. Lux and McPartland’s block and a kill by McPartland would give ETSU a 13-11 lead. ETSU held a one-point lead before Lux’s kill had the Bucs reach 20 points. Samford called timeout when ETSU took a 23-19 lead and Lux would soon give the Bucs set point with her kill. Massey then clinched the set with her kill and the match would be tied 2-2.

Set 5: A 4-1 deficit caused the Bucs to call timeout early on. The momentum shifted as Kaela Massey would register three kills in a row to help the Bucs pull within one. Clayton then followed in Massey’s footsteps with three kills of her own, which would give the Bucs their first lead of the set, 7-6. Samford would tie it at eight before ETSU took an 11-8 lead after Lux and Tutton combined for the block. Samford was able to get a kill after coming out of their second timeout, but that would be the end of their scoring. Lux and McPartland each had kills and a ball handling error by the Bulldogs set ETSU up for set point. McPartland would come through once again, this time combining with Kvarta and ETSU would complete their comeback with a 15-9 set win in the fifth.