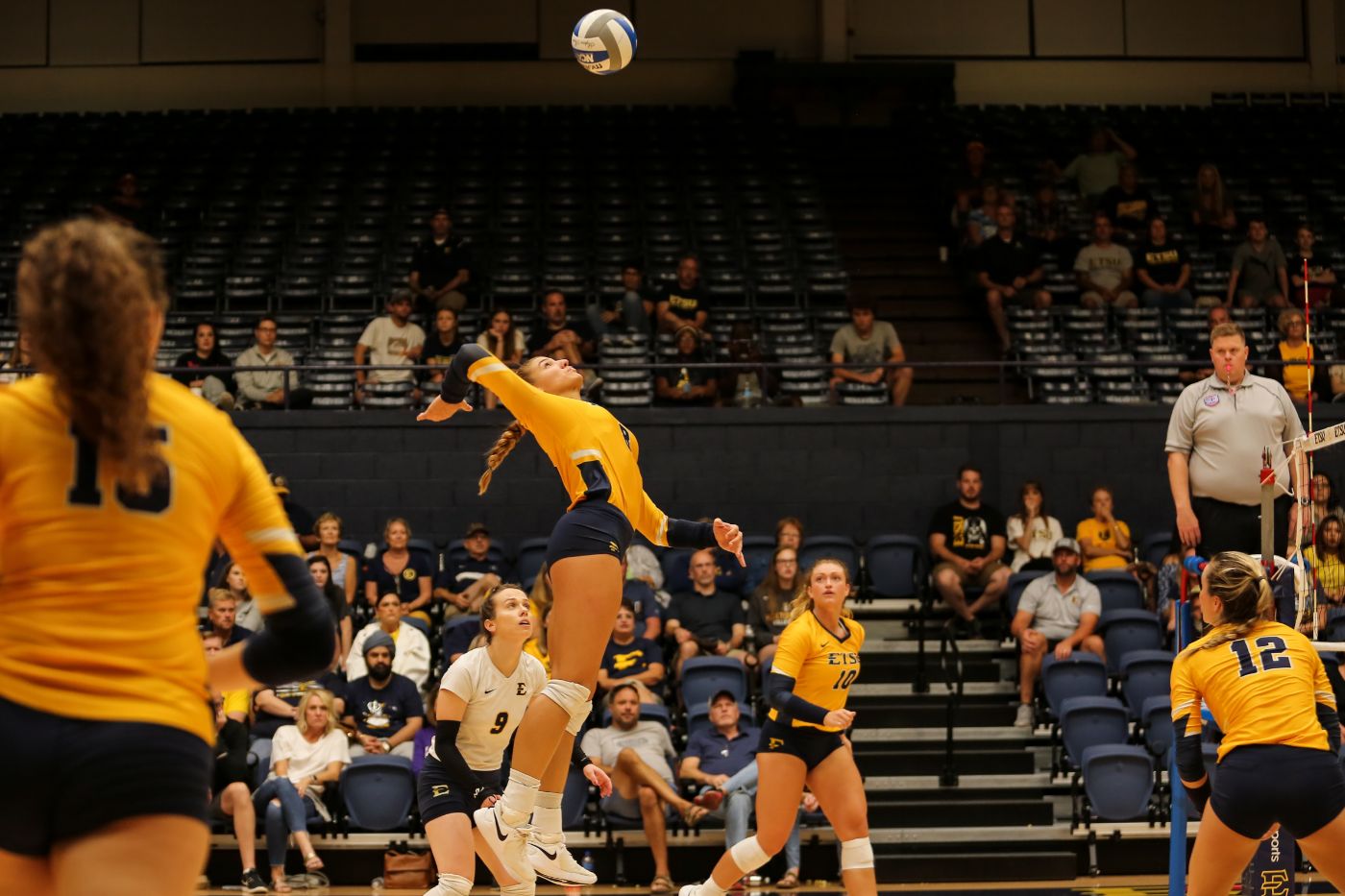 Lux and Clayton each record 19 kills

“It’s always hard to play in Furman’s gym, so we had a good mindset going into tonight’s match,” shared head coach Lindsey Devine. “When you look at the stats, it may not reflect all of the great things we did tonight, but the difference was that when we needed a point, we were able to execute under the pressure. Throughout our season, different players have stepped up for us and tonight it was our outsides who were able to handle the workload.”

Set 1: Hailey Aguilar’s service run helped the Bucs grab a 5-1 lead. ETSU extended their lead to 13-6 forcing the Paladins to call timeout. The Bucs continued to dominate and held a 20-11 lead. A 3-0 run helped the Bucs reach set point, but Furman wasn’t going to give up, as they went on a 3-0 run of their own. AJ Lux ended the set with a kill, 25-17. Clayton finished the first set with six kills and a .417 hitting percentage, while Lux had five kills and .417 hitting percentage. Kvarta also had ten assists and Popovic had four digs.

Set 2: The Bucs were able to go ahead 6-3 early on, but the Paladins would tie it at nine. A 4-0 run put the Bucs ahead 13-9. Furman battled back again to tie the set at 13. ETSU then went ahead 20-16, but Furman fought back to tie the set at 20. Lux was able to get a kill, but three consecutive points by the Paladins gave them a 23-22 lead. Lux once again came through to tie the set at 23 and a solo block by McPartland put ETSU out in front 24-23. Furman was able to rally three straight points to take the set 26-24. Clayton and Lux each had four kills in the second set.

Set 3: There were 18 ties and seven lead changes throughout the third set. Neither team was able to pull away, as the entire set was a see-saw battle. With the set tied at 23, Lux smashed a kill to give ETSU set point, but Furman was able to tie it once again. Mariah McPartland was key in the Bucs’ success after giving ETSU set point with a kill and then combined with Sara Esposito (Pianiga, Venezia) to clinch the set 26-24.

Set 4: A 4-0 run by the Paladins put them out in front 7-5. They were able to hold their lead until kills by Lux and McPartland tied the set at 13. ETSU’s 6-1 run would set them up for match point with the score sitting at 24-18. Furman was able to reel off five straight points to pull within one, but McPartland was able to finish it with a kill, 25-23.

Up Next: ETSU travels to Spartanburg, S.C. to take on the Wofford Terriers tomorrow, Nov. 3 at 4:00 p.m.