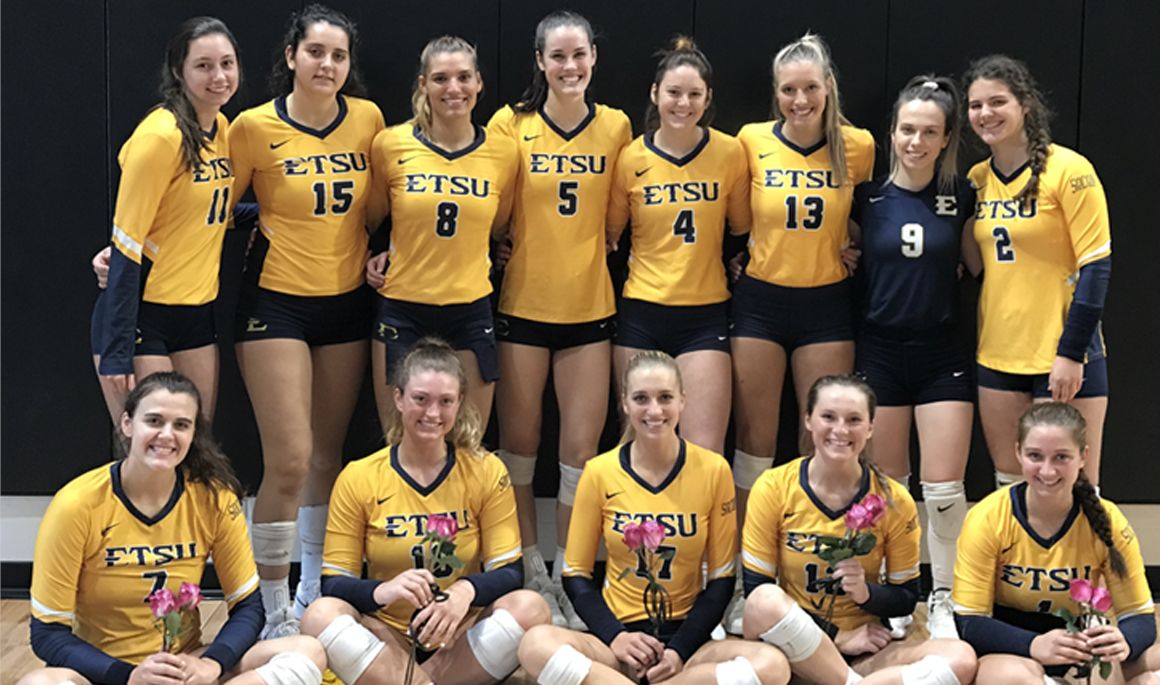 ETSU clinches the No. 1 seed in the SoCon Tournament

“Back in August, the team set three goals for our season,” said head coach Lindsey Devine. “Today we were able to accomplish one of those goals. I’m proud of this team for today’s determination, the season long grit and the individual growth.”

This is ETSU’s second SoCon regular season title within the last three years and the 14th three set victory of the season. With the win the Buccaneers secured the No. 1 seed in the upcoming SoCon tournament and improves their overall record to 24-5 and 13-1 in SoCon play.

“This is our second time winning first in conference,” shared senior captain Alyssa Kvarta. “It’s a really great feeling because we’ve worked really really hard this year, especially in preseason. We didn’t take our preseason games lightly. We went in and we played as hard as we could against some of those big teams. We were focused and we came out on top and it was really exciting. We’re going to finish those last two games at home, hoping to maintain that record. We’re going to stay level headed and go into the conference tournament with a good mindset. We’re going to work really hard to maintain that title like last year.

“It’s exciting, but also very humbling,” Lux said.  “We work very hard day in and day out. We deserve this. We’re not complacent and we want to beat every team in three sets no matter what. We hold ourselves to a high standard at all times. It’s a really good feeling and never gets old, but we’re not done yet”

Set 1: Wofford jumped out to a 10-6 lead to control the pace of the set. They eventually extended their lead to 13-5. With an eight-point deficit, Kaela Massey’s 8-0 serve run helped the Bucs tie the set at 20. Clayton provided three straight kills to end the run. The remainder of the set was tied at points 21, 22, and 23, but AJ Lux came in clutch with back-to-back kills to secure the comeback 25-23.

Set 2: The Terriers were able to take a lead before Clayton’s 4-0 run tied the set at nine. Alyssa Kvarta’s 7-0 service run sparked the Bucs, as they would take a 17-13 lead. The Bucs continued to build upon their lead, but holding Wofford to just 16 points. Clayton and Lux were key in the Bucs’ success in getting kills. Blocks by McPartland and Massey also helped ETSU control their lead. A 5-0 run would eventually end it 25-16.

Set 3: ETSU was able to take a 6-2 lead after Massey’s service run. The Terriers fought back to take a 7-6 lead, but the Bucs would rally to take a 12-9 lead after going on a 6-1 run. ETSU held their lead and Clayton once again had three consecutive kills to put the Bucs ahead 20-15. Massey helped ETSU reach match point, but Wofford wasn’t going down without a fight. The Terriers scored four points in a row to come within one of the Bucs. Senior McPartland would clinch the match for the Bucs with her kill, 25-23.