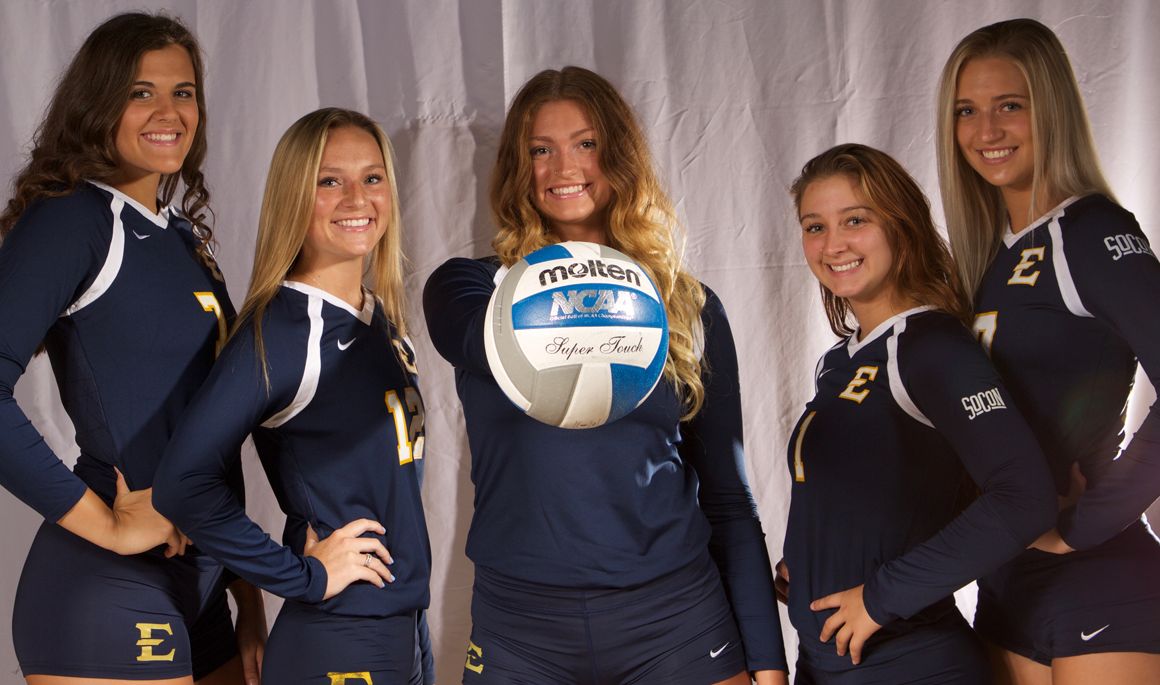 JOHNSON CITY, Tenn. (Nov. 8, 2018) – After capturing the 2018 regular season title, the ETSU volleyball team returns to Brooks Gym to cap off the regular season, with matches against The Citadel and Mercer. ETSU’s five seniors will also play their last matches inside Brooks, as they will be honored before Saturday’s match against Mercer at 2:00 p.m.

ETSU vs. The Citadel: Live Stats

LAST TIME OUT: ETSU picked up two road wins. The Bucs defeated Furman on their home court in Alley Gym. It was the first time since 2006 that ETSU was able to beat Furman on the road.  The Bucs also swept Wofford to clinch the 2018 regular season title.

ETSU vs. The Citadel: This will be the 21st meeting in program history. ETSU has a perfect 20-0 record against the Bulldogs.

ETSU vs. Mercer: This will be the 25th meeting in program history. ETSU holds a 19-5 all-time record against the Bears.

A LOOK AT ETSU: The Bucs have been dominant all season holding a 24-5 overall record and a 13-1 record in conference play. ETSU has only dropped straight sets twice this season and a big part of their success comes with their seniors. AJ Lux (Shelbyville, Ind.) is second on the team in kills with 313, averaging 2.95 kills per set. Braedyn Tutton (Courtice, Ontario) is third on the team in kills with 206 and is also second in total blocks. She has 25 solo blocks on the season and is second in the conference in blocks. Mariah McPartland (Boone, Iowa) is first on the team and leads the SoCon in blocks with a 1.12 block per set average. Alyssa Kvarta (Crown Point, Ind.) has controlled the Buccaneer offense all season, averaging 10.80 assists per set and 2.30 digs per set. Lastly, Hailey Aguilar (Chicago, Ill.) has been a tremendous defensive specialist with 196 digs and 12 service aces.

A LOOK AT THE CITADEL: The Citadel enters the weekend with a 10-17 overall record and are 4-11 in conference play. Sharlissa De Jesus is second in the SoCon in kills averaging 3.86 kills per set and is also second in service aces. Sarah Dobrich and Alicia Roberts have led the Bulldogs in blocks throughout the season, as Megan Fuhr has an 8.50 assist per set average.

A LOOK AT MERCER: Mercer is 15-11 and currently tied for third in the SoCon with an 8-7 record. The Bears have won their last three matches, which includes wins over Chattanooga, Samford, and The Citadel. Mercer trails right behind the Bucs, holding second with a. 217 team hitting percentage and are ranked third in blocks. Mercer’s Paige Alsten leads the conference with a .342 hitting percentage.