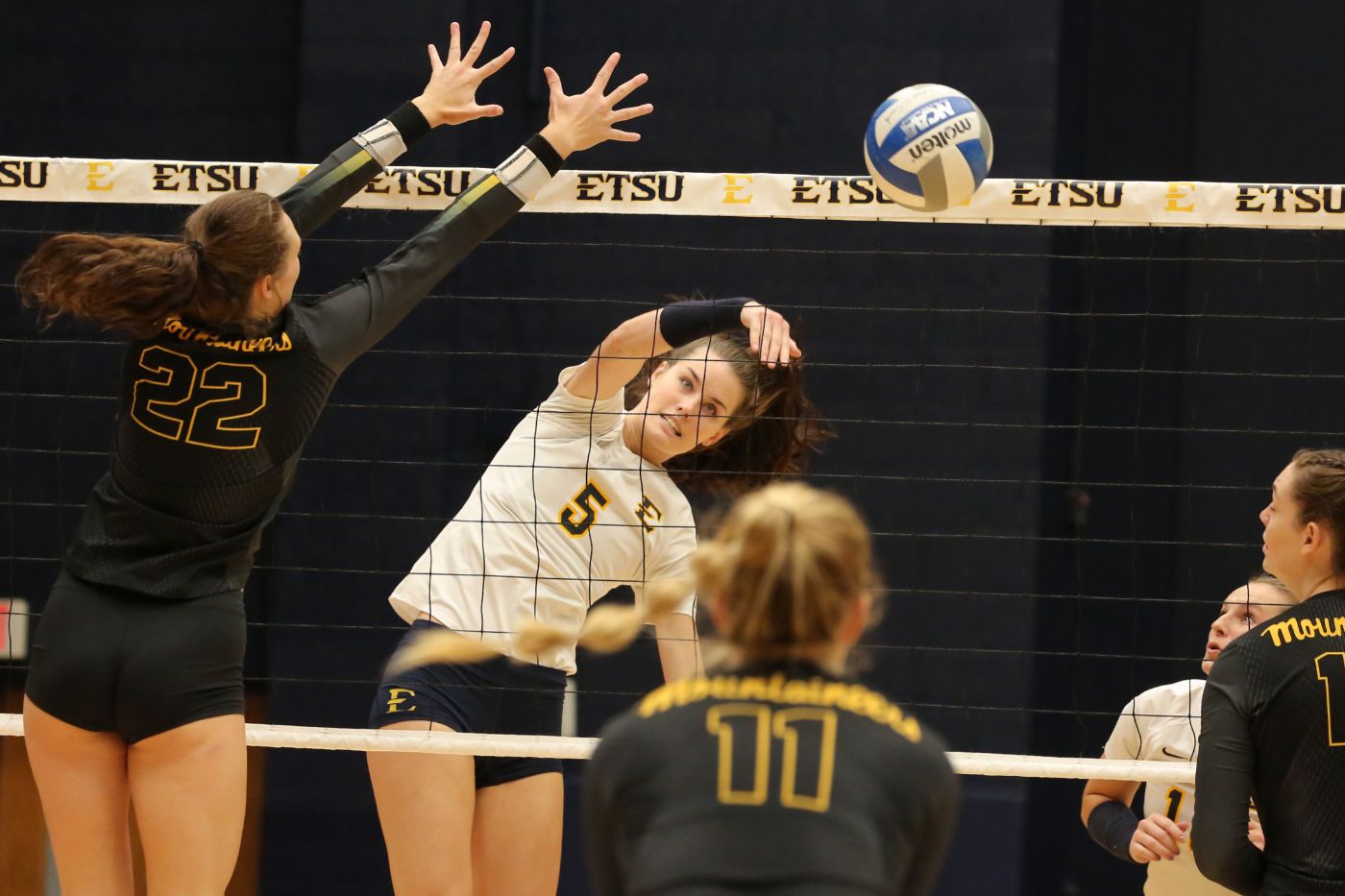 Jacksonville, Ala. (Aug. 30, 2019) – The ETSU volleyball team began their 2019 campaign with back-to-back victories at the Jacksonville State Invitational by taking down Jacksonville State (3-1) and Southeastern Louisiana (3-0).  The two wins are the first for first-year head coach, Benavia Jenkins.

With the two victories, Jenkins becomes the second coach in the program’s history to start off her career 2-0 (Deane Webb, 2001). “It was a great feeling to get the first win under my belt,” she said. “We can only go up from here.”

Game one: ETSU vs Jacksonville State

Set 1: The first set was back-and-forth between the Bucs and the Gamecocks until it was 10-10 in the frame. The Bucs gained momentum and went on a 10-3 run courtesy of back-to-back aces and two kills from Abbie Trantham (Candler, N.C.) and two kills by Kaela Massey (Brentwood, Tenn.). JSU started a comeback down 22-15 and going on an 8-2 run to bring the frame to 24-23. The Blue and Gold finished out the set 25-23 off of a kill by Massey to take a 1-0 advantage in the match.

Set 3: The Bucs started the third frame on an 11-4 run with two block assists by Trantham and Massey. Marija Popovic (Beglrade, Serbia) contributed to the run with two service aces and Lundyn Coffman (Nolensvolle, Tenn.) added two kills throughout the 11-point start. After a timeout, the Gamecocks found momentum and went on a run of their own to tie the set at 15. After a competitive end to the frame, the Blue and Gold finished it off with a kill from Coffman to take the set 25-22 and a 2-1 lead in the match.

Set 4: The fourth set was the closest of the match with no team having more than a three-point advantage throughout. No team led by more than two after a JSU 6-3 lead. After points were won back-and-forth throughout the final half of the match, ETSU took the last two points off of kills from Trantham and Emily Arnold (Louisville, Ky.) to clinch the set 25-23. The Bucs finished the set with a .542 hitting percentage (14-for-24).

Set 1: The first set started off promising for the Lions with three straight service aces to begin the match. After the Bucs began climbing back in the set, it remained close until the winning point with no team leading by more than two after a 6-3 advantage for SLU. The Blue and Gold finished off the set with two kills from Lauren Hatch (Homewood, Ill.). Hatch got off to a quick start in her collegiate debut with seven kills in the first set, a match-high.

Set 2: Both teams continued to battle throughout the first half of the second set. ETSU controlled a one-to-two-point lead throughout until they took with a 14-13 advantage. The second half of the set was a different story as the Bucs capped off the frame on an 11-5 run. The run consisted of five SLU errors and two kills from Massey and three from Hatch. ETSU took the set 25-18 to give them a 2-0 advantage.

Set 3: After two straight points by the Lions, the Blue and Gold got on the board in the third set by back-to-back kills from Alyssa Hatley (Rogersville, Tenn.) , her first of the season. Like the first two sets, the first half of the third was neck and neck. In the second half of the third stanza, SLU went from a one-point lead at 18-17 to a 23-18 advantage. ETSU came back and fought off two SLU match points to tie the set at 24. The Bucs went on a 3-1 run to close out the set and the match with two kills from Trantham.

The team is back in action tomorrow morning at noon eastern time to face Troy and close out the Jacksonville State Invite.