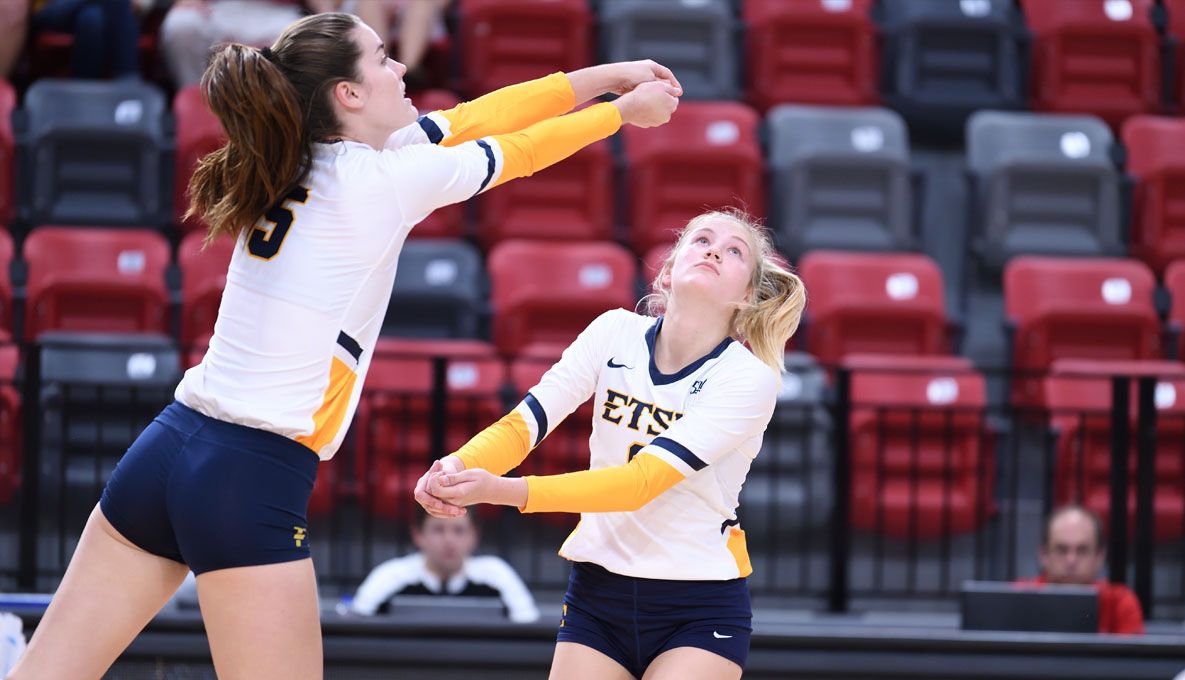 Greensboro, N.C. (Sept. 6, 2019) - The ETSU volleyball team got off to a 2-0 start at the Coastal Carolina Classic after sweeping South Carolina State and Charleston Southern on Friday afternoon. The Bucs improved to 5-0 for the third time in program history.

Game one: ETSU vs Charleston Southern

Set 1: The first 20 points of the set alternated between the two teams and then ETSU took off. The Blue and Gold began a 9-3 run with kills from five different Bucs. CSU began a short comeback causing an ETSU timeout at 22-16. ETSU scored four out the next six points to secure the first frame 25-18. Olivia Cunningham (Knoxville, Tenn.) led the squad with five kills. Abbie Trantham (Candler, N.C.) and Kaela Massey (Brentwood, Tenn.) both finished with a 1.000 hitting percentage (4-for-4).

Set 2: ETSU took the momentum from set one and continued to thrive on the court taking the second set 25-16. ETSU had the lead from the beginning once again. Cunningham and Massey continued to shine for ETSU with four and six kills respectively in the set.

Set 3: The Blue and Gold got off to a hot start once again before CSU started to battle back. The team from South Carolina took their first lead of the match at 9-8 in the third set. Sara Esposito (Venezia, Italy) shined in the middle of the set with back-to-back kills to give ETSU a 14-9 lead. The Blue and Gold finished off the set with a 17-7 run to take the match.

The first set was close until it was knotted up at 10. ETSU went on a 15-6 run to close out the frame to cl a 1-0 lead in the match. The run was led by Trantham who had four digs and Hatch who had back-to-back aces towards the end of the frame. The Bucs finished the set with four aces.

Set two started off with the Bulldogs coming out on a 6-1 run. The Bucs came back to tie the match at nine, 10 and 13. Hatley had three consecutive kills to give ETSU a 16-13 advantage. After S.C. State rallied to take a one-point lead, ETSU called a timeout and the final third of the set was back-and-forth. S.C. State held set point over the Bucs when Hatley exploded again smacking the ball down the line to tie the set at 25. She served the final two points of the set and with help from a Cunningham kill, gave ETSU a 29-27 set win and 2-0 advantage.

After a 2-1 lead for the Bucs, Sherrill started a service run of eight straight serves which allotted to a 9-2 ETSU lead and they never looked back. The Blue and Gold were led by Cunningham, their freshman outside hitter who had six kills on seven attempts in the frame. The Knoxville, Tenn. native served the final seven points of the match to help the Bucs take the set 25-7.

The Bucs are back in action tomorrow, Sept. 7 to face Coastal Carolina at 2 p.m. to close the tournament.