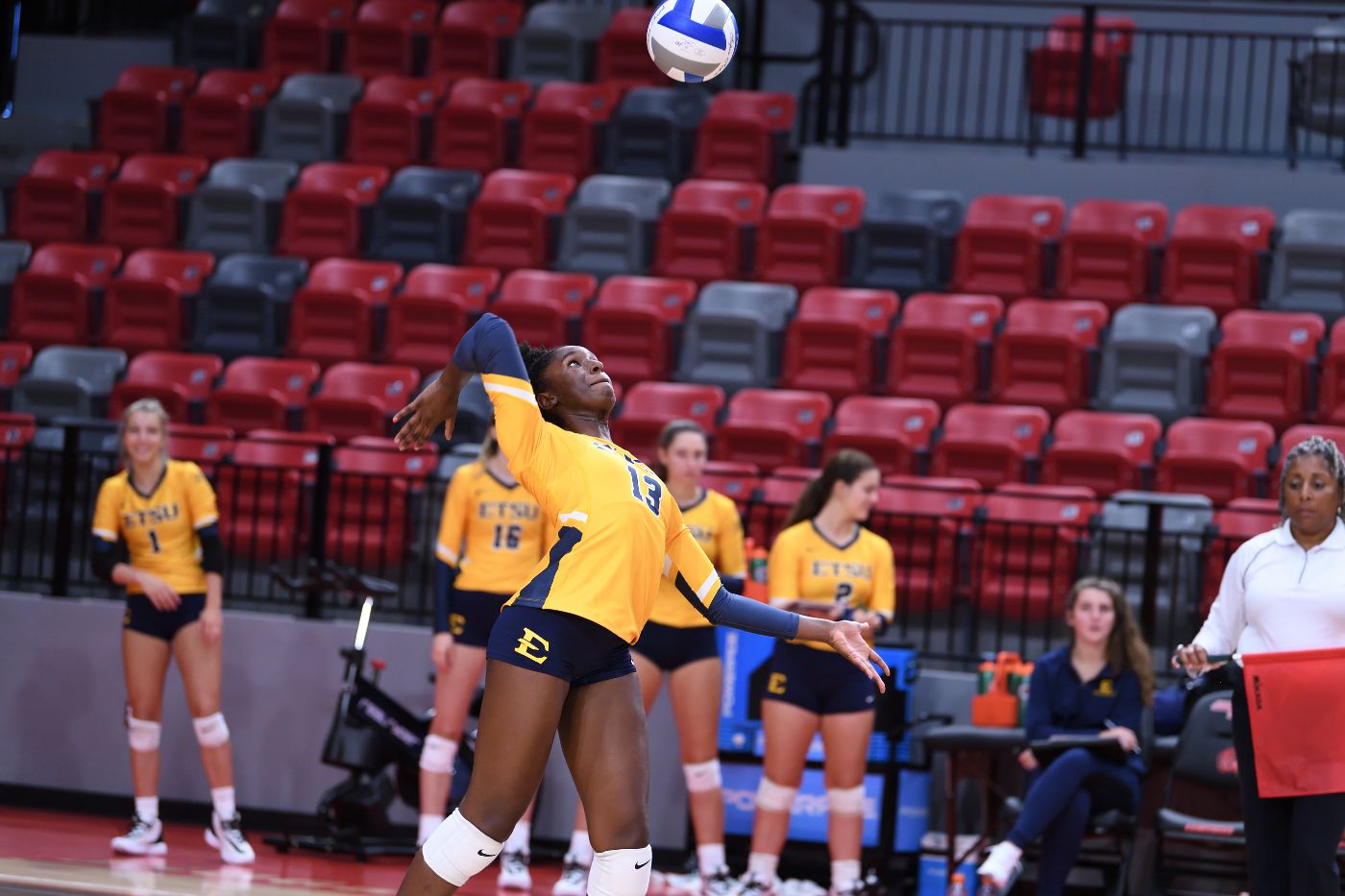 BIRMINGHAM, Ala. (Sept. 14 2019) – ETSU’s volleyball team found themselves in two five-set matches on Saturday afternoon. The Blue and Gold won their first five-setter of the season over the Georgia State Panthers but fell to the University of Alabama-Birmingham Blazers 3-2 in the final contest of the tournament.

Set 1 (25-21 GSU): Georgia State got off to a strong start in the first set. Senior outside hitter for the Panthers, Morgan Hash, logged eight kills in the first frame including four in their first 12 points. The Blue and Gold battled back late cutting GSU’s lead to as little as four but were unable to take the lead. Throughout the first frame, the two teams combined for three blocks and two aces.

Set 2 (25-22 ETSU): The second set was tied at four before the Panthers jumped on a 4-0 run. In the middle of the set, Lundyn Coffman (Nolensville, Tenn.) logged back-to-back kills to tie the set at 15. From there, GSU jumped on a 5-2 run before a block assist from Esposito and Kaela Massey (Brentwood, Tenn.) switched the momentum. The Bucs finished the frame on 8-2 run capped off my a Marija Popovic (Belgrade, Serbia) ace to tie the match at one set apiece.

Set 3 (25-18 ETSU): Coffman got the Blue and Gold off to a hot start being a part of a block on the Bucs’ first four points. The set stayed close with the largest lead being a 10-5 ETSU advantage. ETSU never gave up the lead as GSU only managed to tie the set once (23-23). The Bucs closed out the set on a kill from Esposito. Both teams hit under .100 in the set combining for 19 errors and 21 kills.

Set 4 (25-21 GSU): The Panthers took an early 4-0 advantage in the set and controlled the fourth until the Bucs came back to tie the set at 13. Georgia St. went on a 6-0 run in the middle of the set to take a 20-14 lead. The Bucs battled off three GSU set points, but it was not enough to complete the comeback. The Panthers took the fourth frame 25-21 to force a deciding fifth set.

Set 5 (15-12 ETSU): The fifth set started with two aces and two kills from each squad at the beginning. It was a 5-5 game before ETSU began to run away with the set on a 5-0 run served by Popovic. The Bucs found themselves up 14-8 before the Panthers started a small comeback of their own. The Blue and Gold held their ground and won the match off of a GSU service error.

Set 1 (25-22 ETSU): The Bucs got off to an 11-3 after a 6-0 run and matched their eight-point lead with a 17-9 advantage towards the end of the frame. The Blazers matted back with small 3-0 runs of their own followed by five straight points to tie the set at 22. The Bucs won the final three points of the set off of three attack errors from UAB. The Bucs had five blocks in the set compared to three for the Blazers.

Set 4 (25-23 ETSU): The Bucs had the lead from the first point of the set and never gave it up. The Blazers starting inching back and went on a 5-0 run to bring the set to 23-22 before the Bucs finished the frame with two of the next three points. Both teams hit under .100 in the set.

Set 5 (15-13 UAB): UAB took the lead in the fifth set early and controlled throughout the first half of the set, taking a 10-5 lead. The Bucs had their backs against the wall down 14-9 when Hatch got behind the service line. Hatch served four straight points including two aces to bring the Bucs within one. The Blazers won the next point to clinch the victory and a 15-13 win in the fifth frame.

“Overall it was a tough weekend. We are nursing a lot of injuries and trying to keep the players healthy. I asked the players to continue to trust the process and we will look at film to learn from our wins and loss,” said Head Coach Benavia Jenkins.

“As a team, we are serving really tough, but need to be more disciplined on defense and be stronger offensively. I think in the future we will be a hard team to beat but we must bring a level of intensity and focus to every match.”

The Bucs are back in action next weekend at the Tennessee Classic. They face Tennessee at 6:30 p.m. on Friday, Sept. 20.