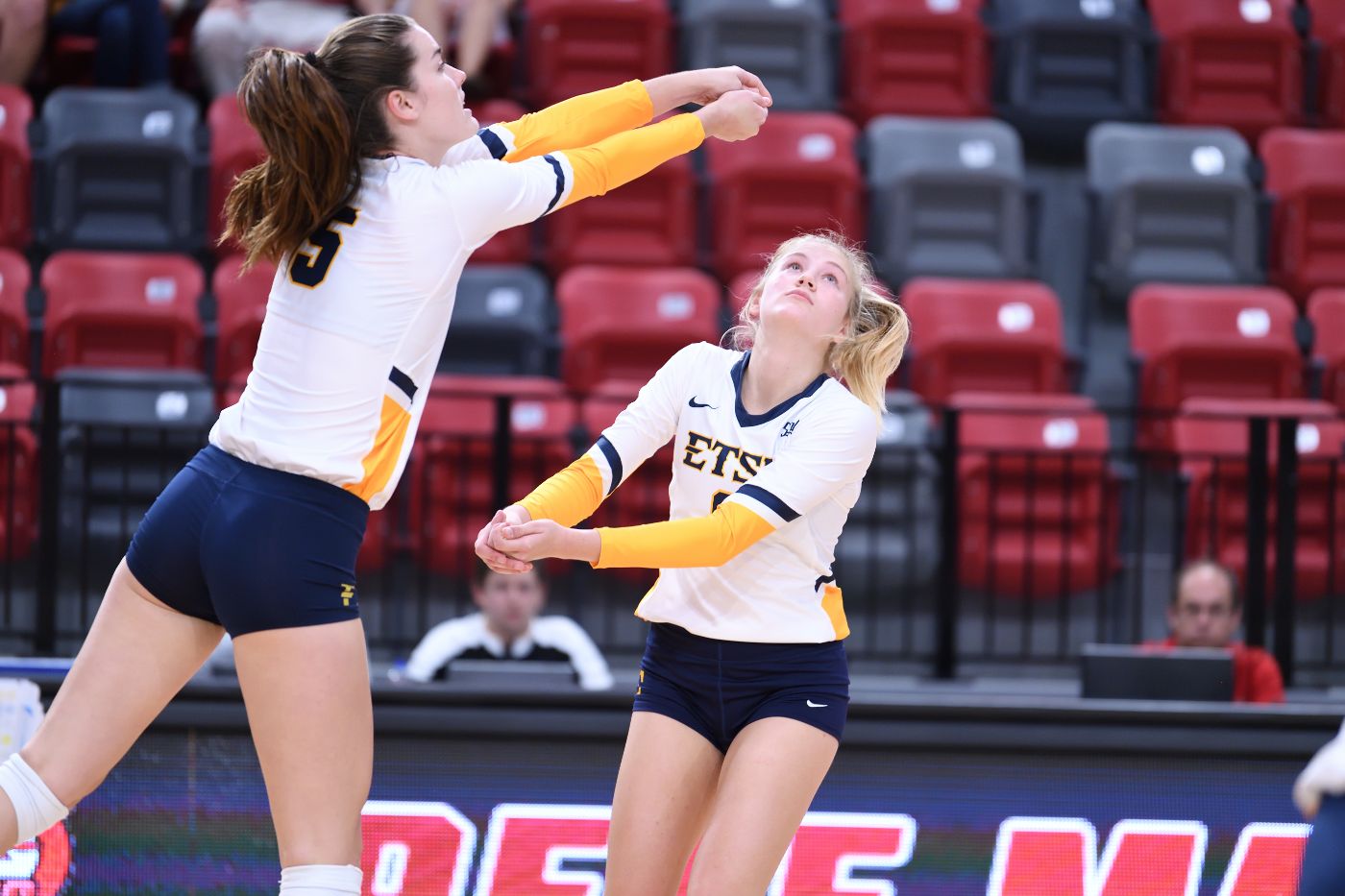 The Bucs were led all day by Kaela Massey (Brentwood, Tenn.) and Olivia Cunningham (Knoxville, Tenn.). The two players combined for 66 kills, 11 aces, 14 blocks and 55 digs.

“I am proud of our players and showing their fight to win games,” said Head Coach Benavia Jenkins. “They fought hard against scrappy teams like NDSU and Georgia Southern. We did a good job finding ways today to score in tough situations.”

Set 2 (25-23 ETSU): The second set was just as competitive as the first. The Bison jumped onto a 15-7 lead forcing an ETSU timeout. The Bucs came out of the timeout and went on a 5-0 run before forcing the Bison to call a timeout. ETSU found themselves down 19-14 and then they went on another run, this time a 6-1 rout to tie the set at 20. The two squads alternated points until the Bucs took a 24-22 lead to ultimately give them the victory in the frame 25-23.

Set 3 (25-23 ETSU): For the first time in the match, ETSU started strong in the third frame. The Blue and Gold got off to a 10-5 lead. Like the first two frames, the team that was down came back as the Bison tied the second set at 20. The Bucs capitalized on three kills from Sara Esposito (Venezia, Italy) and two NDSU attack errors to take the set 25-23 and a 2-1 advantage in the match.

Set 4 (25-21 ETSU): The fourth set was the closest out of the gate with the teams locked at 10 through the first 20 points. NDSU went on a 3-0 run to take a 13-11 advantage before the Bucs went on a 6-1 run on their own. Unlike the first three sets, the lead was not given up and the Blue and Gold took the fourth and final set on a kill from Cunningham.

Set 1 (25-23 ETSU): For the first time all weekend, the Bucs jumped on a 4-0 run to start the match. They held the lead throughout the first frame until the score was knotted up at 15 apiece and GSU took a 16-15 lead. The two teams went back-and-forth between the Bucs and the Eagles before ETSU won the set off of a Massey kill and a setting error by GSU.

Set 3 (25-16 ETSU): The Bucs saw the Eagles rout in the second stanza and wanted a dominant set of their own. The first few points went back-and-forth before the Bucs went on a 9-3 run to give them a 14-7 lead. Ultimately, ETSU held an eight-to-nine-point lead throughout to take the set 25-16. The Blue and Gold held the Eagles to a .049 attack clip as the Bucs logged just nine kills on 32 attempts with only one error.

Set 4 (25-23 GSU): The fourth set was similar to the first with the set being close until it was knotted up at 21. The Eagles finished the second frame on a 6-2 run shaking off a late ETSU comeback attempt. Both squads hit below .200 in the set.

Set 5 (15-13 ETSU): The fifth and deciding final set was arguably the most exciting set the Bucs played all weekend. Both teams exchanged the first nine points of the set until the Bucs took a 5-4 lead and ultimately had a 9-6 advantage. GSU jumped on a 4-0 run to take a 10-9 lead. The Bucs battled back and the two teams alternated points until it was tied at 13. Hatch slotted a kill to give ETSU match point before Cunningham logged her seventh kill of the set to give the Bucs a 3-2 win!

“Heading into conference play, we will continue to find ways for our pins to score points,” said Jenkins. “We need to ensure that we are staying disciplined on defense.”

The Bucs begin conference play on Friday, Sept. 27 when they head to South Carolina to take on Furman. First serve is scheduled for 6 p.m.