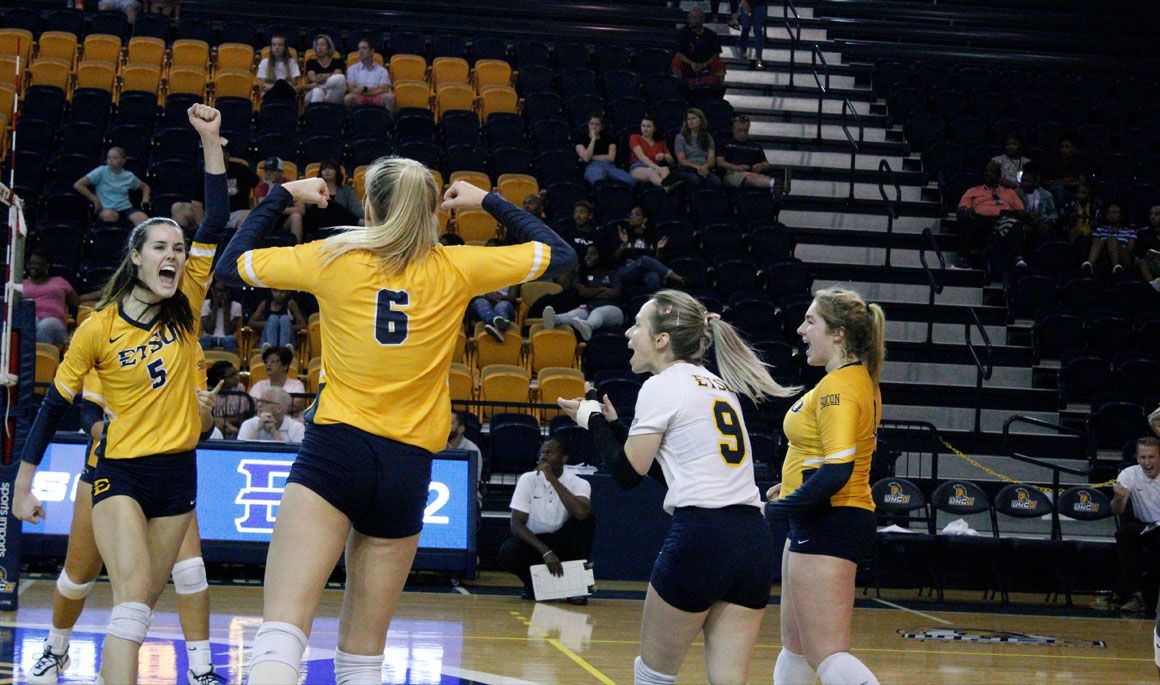 Volleyball Travels to Chattanooga and Mercer

JOHNSON CITY, Tenn. (Oct. 3, 2019) – ETSU’s volleyball team is set to continue Southern Conference action this weekend when they travel to Chattanooga on Friday and Mercer on Saturday. The Bucs currently host a 11-3 overall record, the best in the SoCon. They are one of three SoCon teams who have yet to lose a conference match (2-0).

LAST TIME OUT:  Last weekend, the Blue and Gold recorded victories in their first two conference matches of the season. The Bucs defeated Furman 3-1 on Friday night before getting a win over UNCG in straight sets Saturday evening. Throughout the weekend, Emily Arnold (Louisville, Ky.) set a career-high 50 assists at Furman while spreading the ball around where four ETSU attackers recorded 10+ kills in the match. Arnold was awarded SoCon Setter of the Week for her effort throughout the weekend averaging more than 12 assists/set.

ETSU vs. UTC: This will be the 71st meeting all-time. ETSU leads the series 37-33. The Bucs won the last matchup between the two teams 3-1 in Chattanooga last year.

ETSU vs. Mercer: This will be the 28th matchup all-time. ETSU leads 22-5. The Blue and Gold knocked the Bears out of the conference tournament in the second round with a 3-0 sweep of Mercer. They won all three matches against the Bears in 2018.

A LOOK AT ETSU: The Blue and Gold are one of three SoCon teams that have not lost a match in conference play (Samford & Western Carolina). The Bucs host a conference-best 11-3 overall record after finishing non-conference play with nine wins. ETSU currently leads the SoCon with 15.57 kills/set in SoCon action. Kaela Massey (Brentwood, Tenn.) sits fourth in the conference rankings with a .320 attack clip as Olivia Cunningham (Knoxville, Tenn.) is third averaging 3.83 kills/set.

The Bucs have had three SoCon Players of the Week rounded out by Arnold’s honor last week as Setter of the Week. Massey and Sydney Cherney (Knoxville, Tenn.) have also been awarded the accolade.

The Bucs are coming off a regular-season conference championship and the first-ever NCAA at-large bid in SoCon’s history.

A LOOK AT UTC: Chattanooga is currently on a four-game loosing skid. The Mocs lost their most recent matchup last Wednesday to Samford 3-0. They are coming off of a 10-day break looking for their first conference win of the season. The Mocs were picked to finish seventh in the coaches’ preseason poll. UTC sits second-to-last in the conference with a .178 hitting percentage and are last in the SoCon with 1.25 blocks/set.

A LOOK AT MERCER: Mercer is off to a 2-1 start in SoCon action and have lost two in-a-row. The Bears are led by freshman attacker Jaida Howell who leads the conference with a .382 hitting percentage (129 kills on 259 attempts). Mercer is last in the conference with 11.42 digs/set, but ranks third in hitting percentage (.207) and fourth with opponents averaging a .188 attack clip. Prior to the matchup against the Bucs, Mercer hosts Western Carolina on Friday to continue SoCon play.