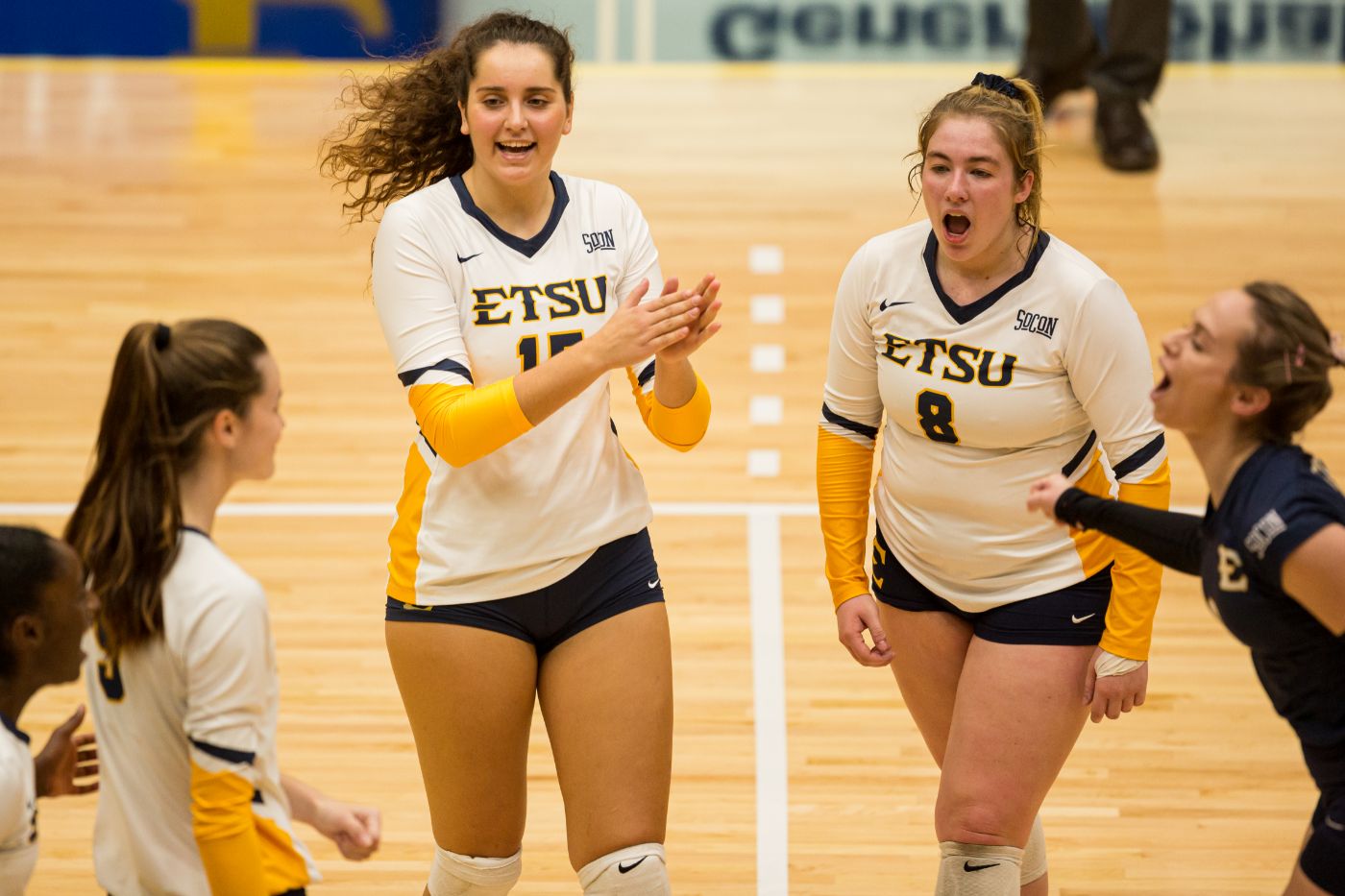 WCU has a current win streak of 10 matches, a league’s best. ETSU’s is at eight and Samford is just behind with six consecutive wins.

LAST TIME OUT:  Last weekend, the Bucs came home for the first time this season and posted a 2-0 record in Brooks Gym. The Bucs defeated Wofford in a five-set victory on Friday before taking down The Citadel Bulldogs in four sets on Saturday. After falling in the first set to the Terriers, ETSU won sets two and three before giving away the fourth set. The Bucs won the fifth frame 17-15 in exciting fashion posting a season-best 16 blocks as a squad.

On Saturday afternoon, the Bucs won a match for the first time after losing the third set. The Blue and Gold were led by Kaela Massey (Brentwood, Tenn.) who logged 11 kills on 23 swings without any errors.  The Bucs defeated the Bulldogs for the 23rd straight time in program history after getting their SoCon-leading 15th win of the season.

Massey hit .302 over the two matches and was awarded SoCon Offensive Player of the Week for the second time this season. She recorded 14 blocks between the two contests. Freshman setter, Emily Arnold (Louisville, Ky.) posted double-doubles in both games and fell one assist shy of her career-high 50 on Friday night. Olivia Cunningham (Knoxville, Tenn.), was one kill shy of her career-best in Friday’s battle against the Terriers with 22.

SERIES HISTORY:
ETSU vs. Western Carolina: This will be the 56th meeting all-time. ETSU leads the series 35-32. The Bucs swept both matches over the Catamounts last season.
ETSU vs. Samford: This will be the 14th matchup all-time. ETSU leads 8-5, but Samford took two of three matches last season including a 3-1 victory in the conference championship match.

A LOOK AT ETSU: The Bucs are 6-0 to begin conference play for the first time since rejoining the SoCon in 2014. ETSU sits atop the conference in hitting percentage (.233) and blocks (2.32/set).

Through the first half of the season, the Blue and Gold have played five five-set matches and are 3-2 in those contests. The Bucs are 14-0 this season when they win the third set and have just one win when losing the third frame (vs The Citadel).

A LOOK AT WESTERN CAROLINA: The Catamounts have played the same six opponents that the Bucs have in SoCon play this season. Western Carolina is 12-7 overall and 6-0 in the SoCon. The back row for WCU has proved to be the strongest aspect of the team as they average 18.18 digs/set, seventh in the nation. WCU’s libero, Meagan Sanchez averages 5.56/set which puts her 1h0th in Division I. She has won five out of seven SoCon Defensive Player of the Week awards.

A LOOK AT SAMFORD: Samford comes into 2019 as the reigning conference tournament champions. They currently hold a six-match win streak and a The Bulldogs lead the conference in assists (12.23/set), opponent hitting percentage (.171) and kills (13.03/set). For their first win of the season, the Bulldogs took down No. 24 Arizona in Tucson. The Bulldogs are top-two in the conference in every major category other than digs and blocks.