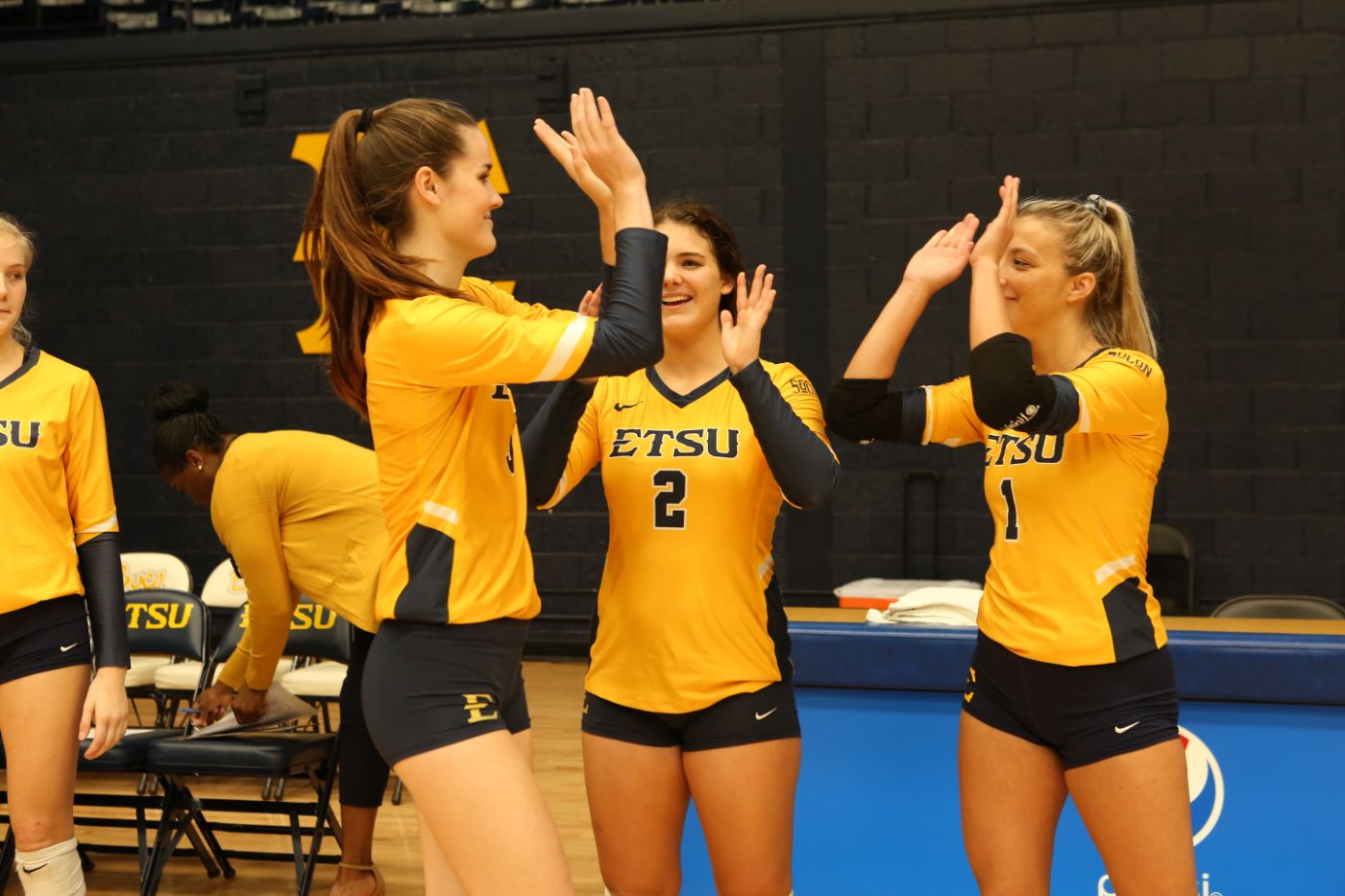 Volleyball to Battle The Citadel and Wofford This Weekend

JOHNSON CITY, Tenn. (Nov. 7, 2019) — The ETSU volleyball team will head on the road for the final time during the Southern Conference regular season to face the Terriers of Wofford on Friday and The Citadel Bulldogs Saturday afternoon. ETSU defeated both squads in Brooks earlier this season.

LAST TIME OUT:  Last weekend, continued their success in Brooks Gym to cap off a four-match home stand. Through the four games the Blue and Gold went 3-1 with their lone defeat coming at the hands of Furman in a five-set match. Last Friday, the Bucs swept Mercer for the second time this season with a dominant .667 hitting percentage from Kaela Massey (Brentwood, Tenn.). On Saturday evening, ETSU was faced with one of their toughest matches of the conference season against a winless Chattanooga squad. The Mocs took the Blue and Gold to five, but ETSU prevailed for their fifth five-set win of the season. In the match, Lauren Hatch (Homewood, Ill.) tied the Bucs’ program record with 29 kills in a match.

SERIES HISTORY:
ETSU vs. The Citadel: This will be the 24th matchup all-time. ETSU is undefeated in the series, hosting a 23-0 record. The Bucs defeated the Bulldogs 3-1 in Brooks earlier this season.
ETSU vs. Wofford: This will be the 30th meeting all-time. ETSU leads the series 23-6 and defeated the Terriers 3-2 earlier this season. The Blue and Gold have won their last four matchups against Wofford.

A LOOK AT ETSU: The Bucs are one of two SoCon teams with just one loss in conference play (Samford) and hold an 11-1 conference record. ETSU currently leads the SoCon in four categories: hitting percentage (.235), assists (12.25/set), kills (13.09/set) and blocks (2.17/set). Individually, Massey sits fourth in the conference rankings with a .337 attack clip as Olivia Cunningham (Knoxville, Tenn.) is fifth averaging 3.55 kills/set. Defensively, Marija Popovic (Belgrade, Serbia) is third in the league with 4.26 digs/set.

This season, the Blue and Gold have played eight five-set matches and are 5-3 in those contests, two of the eight came against Wofford and The Citadel. Additionally, the Bucs are 14-1 when winning the first set and are 18-1 when winning the third frame. Hitting percentage has been key for ETSU as they are 18-0 when they hit above .200 as a team, but are 2-3 this season when hitting below that mark.

A LOOK AT THE CITADEL: Although starting the conference season 0-6, the Bulldogs have won four of their last six and sit just outside the middle of the pack in the SoCon at 4-8. The Citadel is towards the bottom of the league in the major statistical categories due to their struggles early, but have logged 65 kills in each of their last two matches. The Bulldogs are led by Sharlissa De Jesus who leads the way with 262 kills to average 3.28 kills/set. At home, The Citadel is 6-3 compared to being winless in 2019 on the road.

A LOOK AT WOFFORD: The Terriers won both matches last weekend with wins over UNCG and Furman to improve to 6-6 in league play this season. Wofford is led by Catie Cronister who averages 3.21 kills per set and leads the team with 315 this season. Junior middle blocker Riley Coonan is a powerhouse for their squad with a .339 hitting percentage which leads the SoCon. Wofford, the conference tournament hosts, come into this weekend with just one loss at home (8-1). The Terriers have hit above .250 in each of the last three games played at home.

EARLIER THIS SEASON: When the Bulldogs came to Johnson City the Bucs got the win in four sets by limiting The Citadel to a .165 hitting percentage as a team. ETSU had 10 blocks and was led by Massey’s .478 attack clip and five blocks. In the first two sets, the Blue and Gold prevailed easily with 25-16 and 25-18 wins, but the Citadel took the third frame 25-21 before the Bucs took the fourth set 25-20 to clinch the win.

The Bucs opened up their home slate with a match against the Terriers nearly a month ago and it was a tough battle for Coach Jenkins to get her first career win in Brooks Gym. The Bucs edged out the Terriers in a five-set thriller with a 17-15 win in the fifth frame. ETSU was led by Cunningham who finished one kill shy of her career-best with 22 against Wofford. The Blue and Gold limited Wofford’s powerful middle blocker, Cronister, to a -.037 hitting percentage with 11 kills and 13 errors. The Bucs posted 16 blocks in the match, which remains a season-best for the squad.