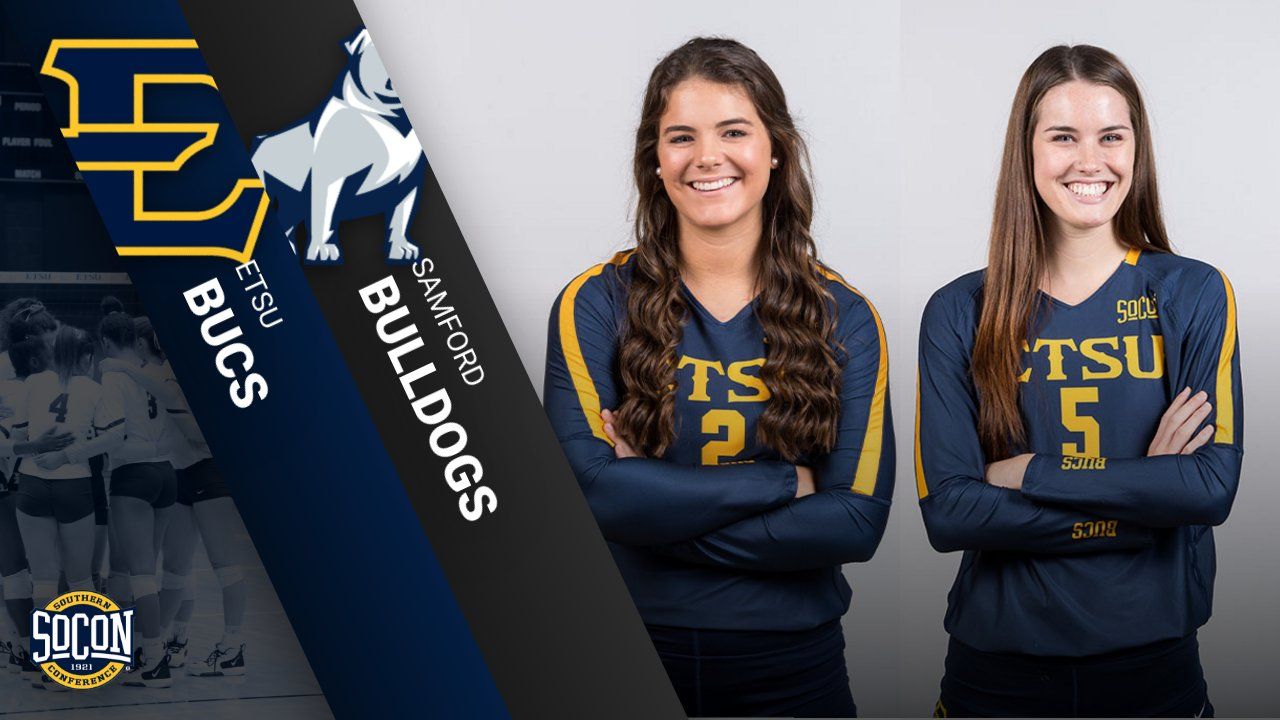 JOHNSON CITY, Tenn. (Nov. 15, 2019) – Saturday night in Brooks Gym set to be a night full of excitement. ETSU’s volleyball team will host the Samford Bulldogs at 8 p.m. to decide the top two seeds in the tournament and possibly the outright Southern Conference title. Additionally, prior to the match, ETSU will honor Kaela Massey (Brentwood, Tenn.) and Mary Catherine Smith (Murfreesboro, Tenn.) as the two seniors on the squad.

The match can be found on the SoCon Digital Network with Mike Gallagher set to call the action. Live stats will also be available to follow along.

PROMOTION: The Bucs will be giving out ETSU beanies sponsored by Pepsi to the first fans in attendance while supplies last.

LAST TIME OUT:  On Wednesday, ETSU won their 14th conference match of the season with a 3-1 victory over the Catamounts. Olivia Cunningham (Knoxville, Tenn.) set a career-best with 17 digs and led the match offensively with 19 kills and four aces. ETSU totaled a .205 hitting percentage to improve to 19-0 this season when hitting above the .200 clip.

In Wednesday’s contest, Marija Popovic (Belgrade, Serbia) became the fourth Buc in program history to reach the milestone of 1,500 digs. In addition, Massey logged three block assists in the match to move into third place all time with 332 in her career.

This will be the 15th meeting all-time between the Bucs and the Bulldogs. ETSU leads the series 9-5.

Individually, Massey is second in the conference with a .340 hitting percentage. Popovic is second in the SoCon with 4.39 digs per set. Cunningham’s 3.62 kills/set puts her fifth in the league and is atop the freshman class. She is also tied for the league-lead with .45 aces per set. Hatch has stepped up big in SoCon play and averages 3.59 kills per set in ETSU’s 15 SoCon matches which is good for fourth in the conference, also best among freshman.

HONORING THE SENIORS: Prior to the start of the match, ETSU will honor Massey and Smith. The pregame ceremony will begin approximately at 7:50 p.m.

WHAT’S AT STAKE: On Friday, Samford is set to face the Catamounts of Western Carolina at 6 p.m. If Samford wins, the winner of Saturday’s match between ETSU and Samford will be crowned outright SoCon Regular-Season Champions and will hold the number one overall seed in the tournament. If Samford loses, ETSU clinches a share of the SoCon regular-season title and if the Bucs defeat the Bulldogs Saturday night, they are outright regular-season conference champions.

If Samford loses to the Catamounts Friday and defeats the Bucs on Saturday, ETSU and Samford will be co-champions and tiebreak scenarios will determine the top two seeds in the bracket.

A LOOK AT SAMFORD: The Bulldogs are hitting .230 this season and host a 13-1 record in the SoCon and 19-5 overall, both good for second in the league behind the Bucs. Samford, the reigning 2019 SoCon champions were also picked as the preseason favorite by the coaches. They hold seven match win-streak as their last loss was at the hands of ETSU. Samford is top-two in the conference in every category other than digs and aces.

EARLIER THIS SEASON: The Blue and Gold faced the Bulldogs in Alabama on Oct. 18 and it was a thrilling five-setter as expected. The Bucs won the first two sets, but were unable to sweep Samford as the Bulldogs battled back in the third and forth to force a fifth frame. ETSU was down early in the fifth, but prevailed with a 6-1 run to ultimately take the set 15-12 and take the crucial match.