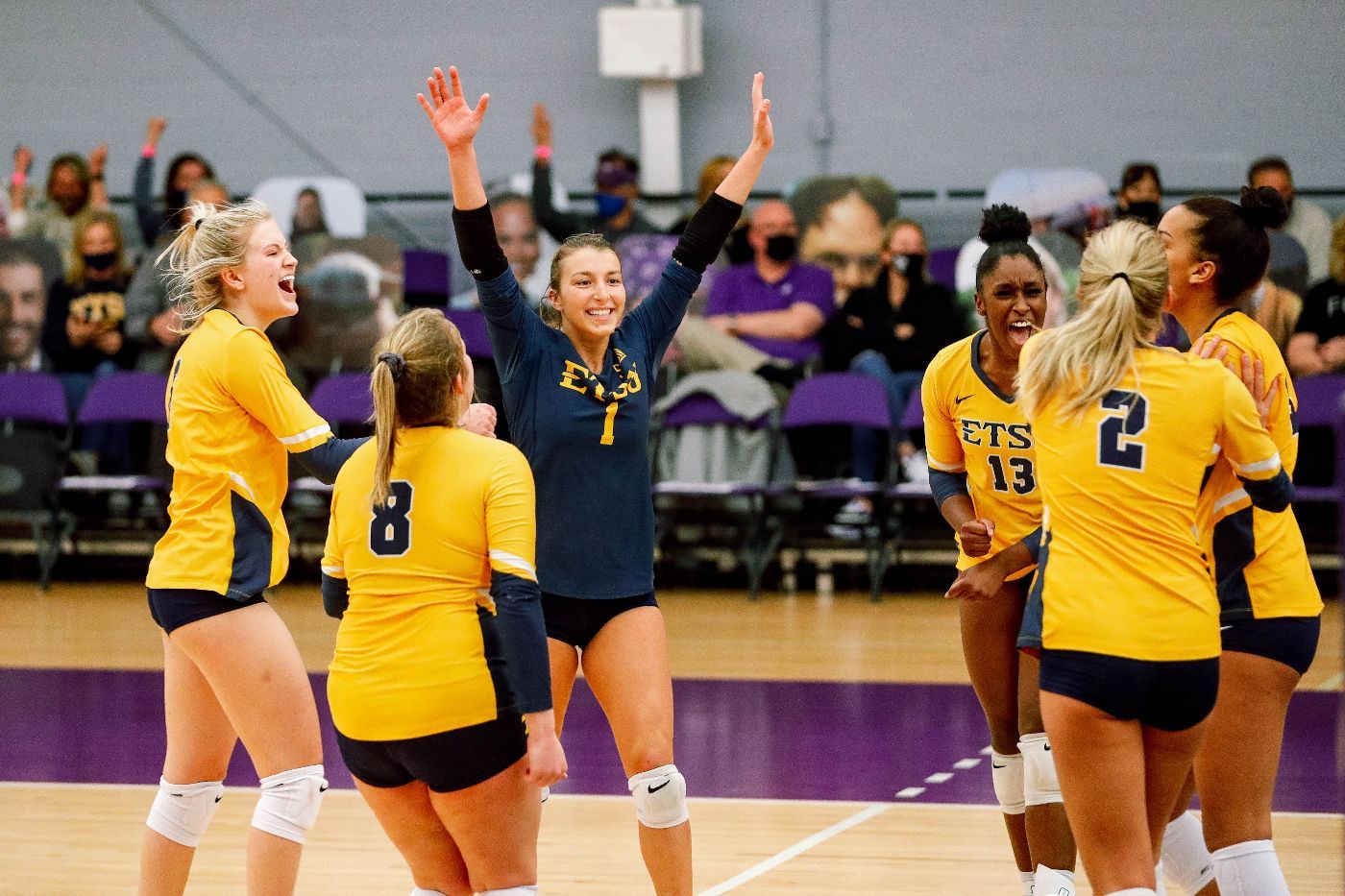 How it happened:
Set 1 (25-16 ETSU): After the two teams traded off the first few points, ETSU went on a 6-1 run to take an 11-7 lead and never looked back. ETSU’s offense was precise as the Bucs hit .400 with 13 kills on 25 attempts in the frame. Olivia Cunningham (Knoxville, Tenn.) dominated the first set with a match-high five kills and Jenna Forster (Maryville, Tenn.) made her presence known early with four in her first collegiate match.

Set 2 (26-24 FUR): The Paladins came out strong in the second set taking an early 11-4 lead. Down 20-15, the Bucs came climbing back and tied the frame at 23 after two kills by Cunningham and a Paladins attack error. Out of a Paladins timeout, Furman had their first set point, but after a ball handling error the match was tied at 24. The Paladins tied the match at one set apiece with an ETSU attack error and kill by Furman’s Courtney Hoffman,

Set 3 (25-19 ETSU): ETSU used the second set as motivation and took a 10-5 lead in early in the third. Furman battled back in the middle of the frame and cut ETSU’s lead to two at 17-15 to force Coach Jenkins to call a timeout. Out of the timeout, the Bucs logged back-to-back kills and Furman took their first timeout of the frame down 19-15. The Bucs went on a 4-1 run out of the timeout off of four Paladin errors to take a 23-20 lead and they never looked back. The Bucs used two kills from Cunningham to take a 2-1 lead in the match.

Set 4 (31-29 FUR): The fourth set was the most completive of the match. The Blue and Gold started strong early with a 9-2 run, but Furman battled back with an 8-3 run of their own. The two teams were knotted up at 18 and it was back and forth from then on. The Bucs had three match points, but couldn’t convert. The Paladins used two Buccaneer errors to take the fourth set and force a fifth. Lauren Hatch (Homewood, Ill.) and Forster both had four kills in the set while Furman had five blocks in the frame.

Set 5 (15-6 ETSU): The Blue and Gold flipped the script in the fifth. ETSU took a 3-0 lead in the final frame and never looked back. After an 9-2 run to open the set, the Bucs used three kills from Hatch and one from Cunningham to shut the door on the Paladins. ETSU held Furman to a .062 attack clip in the set while ETSU hit .400 with eight kills on 15 swings with just two errors.

UP NEXT
The Bucs and the Paladins face off again tomorrow at 6 p.m. in Greenville, S.C. The match will be streamed on ESPN+.