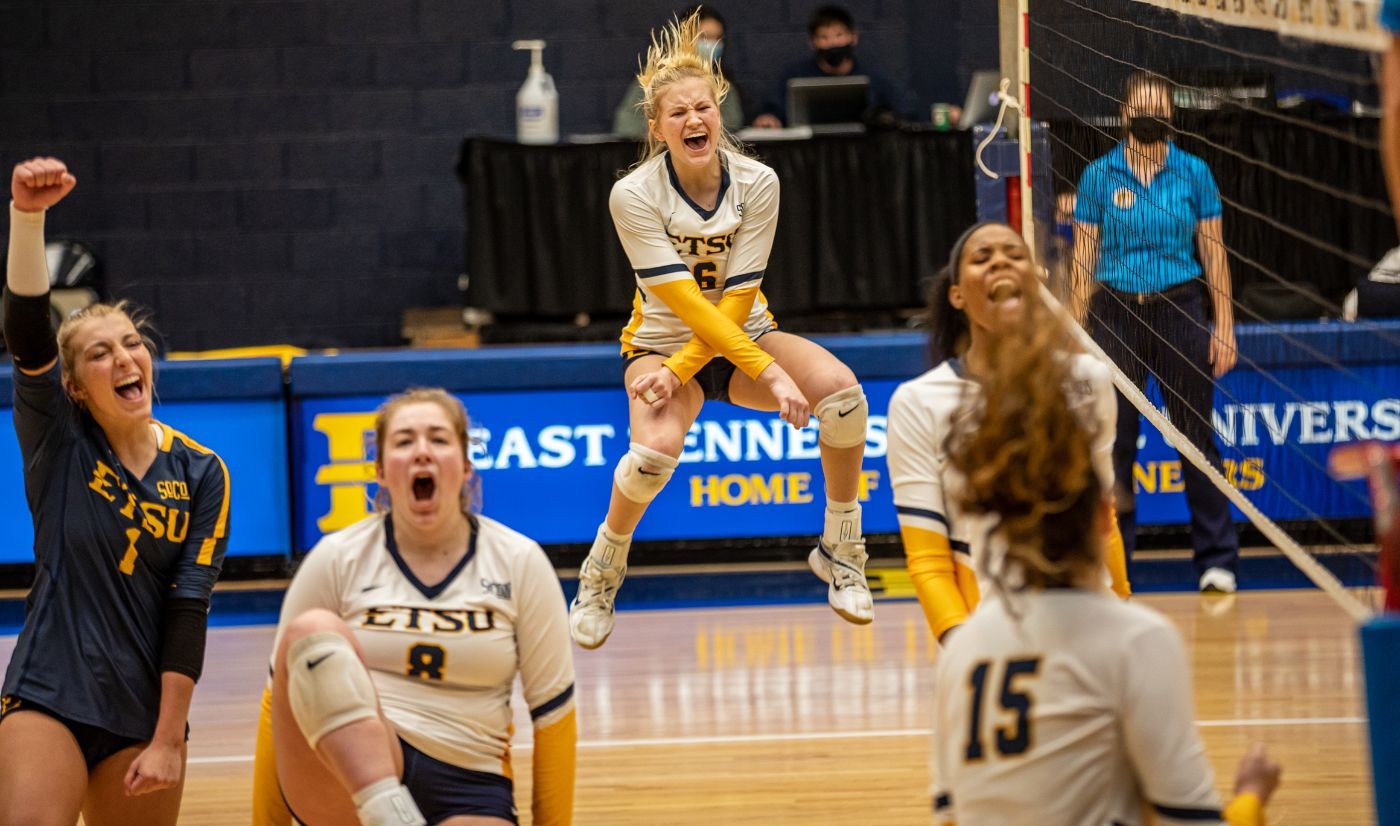 Cunningham becomes just the fifth Buc in program history to have 29+ kills in a match and the second in as many seasons after current teammate, Lauren Hatch (Homewood, Ill.) tied the previous record last season.

How it happened:
Set 1 (25-21 ETSU): Both teams began the match strong offensively as the first 20 points featured 13 kills and just three attacking errors and the set was locked at 10. The competitive first frame featured six ties and three lead changes, but Cunningham’s fourth kill of the day put ETSU up 21-18 and the Bucs looked back. The Blue and Gold had two set points and on the second, Sanne Maring (Groningen, The Netherlands) put the set away giving ETSU a 1-0 lead.

Set 2 (25-23 UNCG): After an ace and a kill from Cunningham to start the set, UNCG went on a 7-1 run to hold a four-point advantage. The Spartans nearly held a five-point lead throughout the rest of the frame until the Bucs battled back to get within two. With the score 22-20, UNCG called their final timeout. The Bucs were able close UNCG’s lead to just a point at 23-22 with a kill from Sara Esposito (Venizia, Italy), but UNCG won two of the next three to tie the match at one set apiece. Nearly a third of Cunningham’s kills came in the second frame as she logged nine in the set; Esposito tallied the other five kills in the frame for the Bucs. It was the first time all season the Spartans won the second set.

Set 4 (25-17 ETSU): ETSU was not going down in their home opener. The Blue and Gold went on an 8-0 run to start the fourth win two kills from Cunningham, an ace and a kill from Emily Arnold (Louisville, Ill.) and a block and a kill from Asia Mattress (Mauldin, S.C.). UNCG was able to cut the lead to seven multiple times, but never got closer as the Bucs were ready for their second five-setter of the season. Six different Bucs recorded kills in the frame, a match high. ETSU outhit UNCG .316 - .075 to force the deciding fifth set.

Set 5 (15-11 ETSU): Cunningham entered the fifth frame four kills shy of the program record. The final set of the two hour and 48-minute match began with back-to-back slams from Mattress in the middle. The frame was tied at six points apiece and then Jenna Forster (Maryville, Tenn.) sparked the first run by either team in the fifth. After they called timeout, the Spartans took their first lead since the third set, holding a 10-9 advantage. With Arnold back to serve, The Bucs raddled off four straight points with a kill from Esposito and a block from Mattress. With a 14-11 lead and their second match point, the Bucs pulled through. Cunningham had the opportunity to set the program record and win the match and she delivered with a cross-court kill to give the Bucs the win.

UP NEXT
The Bucs and the Spartans meet back in Brooks Gym tomorrow, Feb. 15 at 5 p.m.