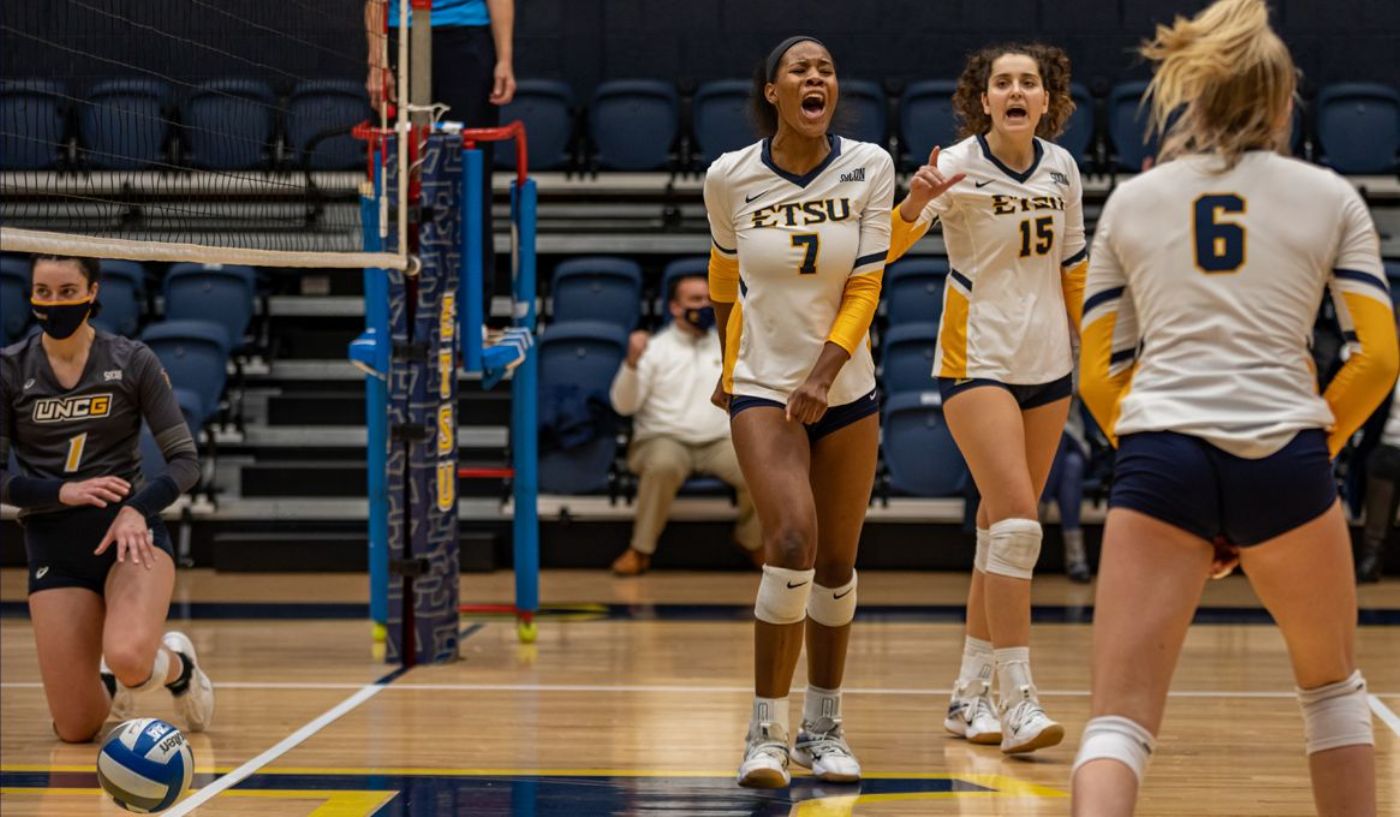 SPARTANBURG, S.C. (Feb. 20, 2021) – The ETSU Volleyball team looks to remain perfect after a 4-0 start to the season as they travel to Spartanburg to take on the Wofford Terriers on Sunday and Monday.

Fans can watch both matches live on ESPN+ with Brock Bowling on the call.

A LOOK AT ETSU
The Bucs are 4-0 entering the weekend after sweeping the season after taking down the UNCG Spartans in both matches at home. The Bucs are 2-0 in five-set matches this season and have also won a three and four-setter as well. Offensively, ETSU is led by Olivia Cunningham (Knoxville, Tenn.) who has 81 kills this season and most recently set a program record with 30 kills in a match on Feb. 14. The reigning SoCon Freshman of the Year and Offensive Player of the Week has recorded three straight double-doubles.

Sanne Maring (Groningen, The Netherlands) has been a strong addition to Coach Benavia Jenkins’ squad as a starting middle blocker. The Hofstra transfer leads the team with 19 blocks and five solo stuffs. She is second on the squad with 36 Bucs and holds a .329 hitting percentage. Among players who have played 75% of their matches, she sits atop the SoCon with 1.12 blocks/set.

ETSU’s veteran right-side hitter, Sara Esposito (Venezia, Italy) found her spark this weekend in Brooks Gym as the junior attacker recorded back-to-back matches with double-digit kills and set a career best with six service aces. She leads the SoCon with 0.83 aces per set and is second with a .333 hitting percentage.

The Bucs led the league with three Preseason All-SoCon selections. Emily Arnold (Louisville, Ky.), Cunningham and Lauren Hatch (Homewood, Ill.) were all named to the SoCon All-Freshman team in 2019 and the accolades continued to roll in for the sophomores prior to the spring season. The three accolades are the most on the preseason team for ETSU since the Blue and Gold rejoined the SoCon in 2014.

ETSU leads the SoCon with a 4-0 record and is the only undefeated team in the league. The Blue and Gold have won 20 straight conference road matches dating back to Oct. 22, 2017. Additionally, overall the Bucs have won 10 straight contests away from Johnson City.

A LOOK AT THE TERRIERS
Wofford is 2-2 entering the weekend. The Terriers swept their home opening series against the Mocs of Chattanooga but were swept at Samford last weekend. Wofford sits in the bottom third of the league in opponent hitting percentage (.206), assists/set (10.56), kills/set (11.50) and aces/set (1.00). Millie Loehr is fourth in the league with a .324 attack clip, while Wofford’s outside hitter, Bella Zeman is fifth in the SoCon with 3.27 kills/set.

SERIES HISTORY:
This will be the 32nd match all-time between the two teams. ETSU leads Wofford 25-6 in the season series, has won five straight and nine of the last 10 contests. The Bucs are 13-2 in Spartanburg and have won the last seven dating back to 2005.