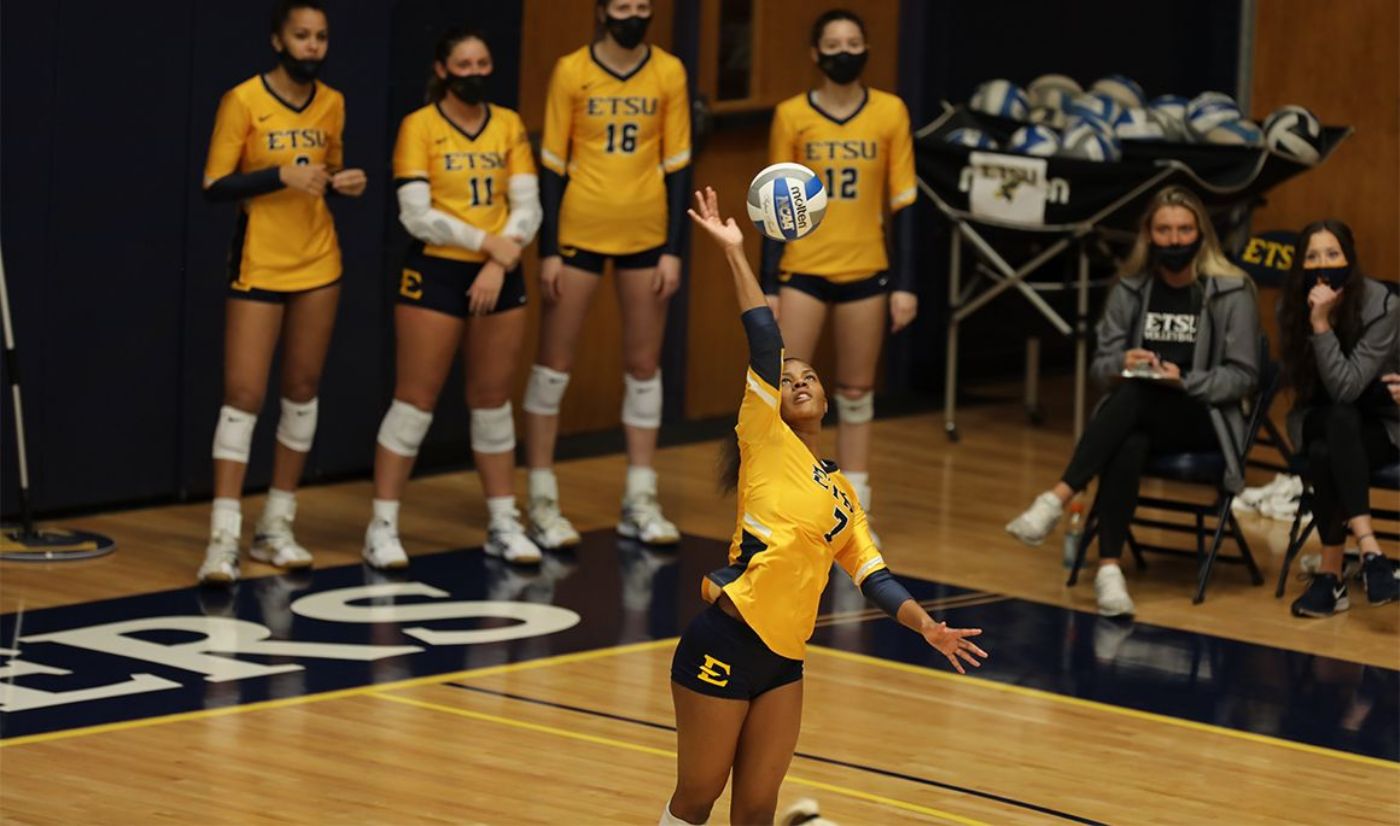 SPARTANBURG, S.C. (Feb. 21, 2021) – With the ETSU volleyball team on the verge of taking the first two sets over Wofford, an injury to one of its offensive leaders shifted momentum late in the second, and the Terriers rallied for a four-set win (25-22, 23-25, 13-25, 13-25) over the Buccaneers on Sunday afternoon inside Richardson Indoor Stadium.

After securing the three-point win in the opening set and going up 17-13 in the second, thanks to Olivia Cunningham’s (Knoxville, Tenn.) eighth kill of the night, the Buccaneer kills leader suffered an injury and did not return to the match. From there, Wofford mounted a 12-6 run to capture second-set win, while claiming the third and fourth set victories en route to rallying for a rare win over ETSU.

Set 1 (25-22 ETSU): Following 18 ties and six lead changes, the Bucs put the first set away by scoring the final four points to go ahead, 1-0 in the match. Wofford jumped out to an early 5-2 lead before ETSU answered with three straight points to even the set at five. From there, neither team led by more than two until the Bucs’ closing run to capture the three-point victory. The Blue and Gold looked to have gained momentum when Sara Esposito (Pianiga, Venezia, Italy) registered a kill and followed that up with a block, forcing Wofford to call its first timeout as ETSU went ahead, 19-17. However, the stoppage worked, as Wofford scored the next three points to regain a one-point advantage, making ETSU to burn a timeout of its own. The teams then traded scores until a Jenna Forster (Maryville, Tenn.) kill ignited the closing 4-0 run.

Six Buccaneers accounted for their 14 kills with Cunningham pacing the group with four on nine attempts. As a team, ETSU hit .286 (14-4-35) and out-blocked Wofford, 3-0.

Set 2 (25-23 Wofford): The early stages of the second set were tightly contested, but with the score knotted at seven, ETSU won six of the next eight points to open a 13-9 lead after another block by Esposito. Following Wofford’s first timeout, the Bucs were able to keep their margin at four as Cunningham collected her eighth kill of the match, pushing the score to 17-13. Unfortunately, Cunningham suffered her injury, and the Buccaneer offensive catalyst didn’t return.

Despite losing Cunningham, ETSU was able to see its lead grow to six, 21-16, thanks to one of eight kills from Asia Mattress (Mauldin, S.C). But like the Bucs did in the opening set, Wofford returned the favor in the second, as they closed the frame out on a 9-2 run to pull even with the 25-23 victory.

Both teams were solid offensively in the second set with ETSU hitting .344 (15-4-32, compared to Wofford’s .314 mark (16-5-35). Mattress was unstoppable as she hit a blistering .800 (4-0-5), while Cunningham also generated four kills on a .429 hitting percentage in the stanza. The difference maker in the closely contested set was the service game as the Bucs had three serving errors to only one by Wofford.

Set 3 (25-13 Wofford): After two back-and-forth games in the opening sets, Wofford led wire-to-wire to secure 12-point win in the third. The Terriers won the first five points and never looked back. The closest ETSU got was four (6-2), but Wofford pushed it to seven, 13-6, resulting in the Bucs calling a timeout. The Blue and Gold battled and cut the deficit to five when a block by Forster made it 14-9, but ETSU was unable to muster the comeback as Wofford used a 7-1 run to go up 11 before closing it out with three consecutive kills.

Set 4 (25-13 Wofford):  At the start, the teams traded scores, but with things tied at two, Wofford rattled off five unanswered points to go ahead, 7-2. ETSU was able to climb back and make it a two-score deficit when a kill by Lundyn Coffman (Nolensville, Tenn.) made it 8-6, but Wofford scored eight of the next 10 points, pushing it to 16-8. The eight-point deficit was too much for the Bucs to overcome and Wofford walked away with the 12-point win.

The Terriers were nearly flawless with their attack in the frame as they hit .500 (17-2-30), while ETSU overcame its negative mark in the third to hit .276 (11-3-29). The Blue and Gold were held without a block in the stanza and totaled two setting errors, along with a service error.

The teams close out the series Monday evening at 5 p.m.